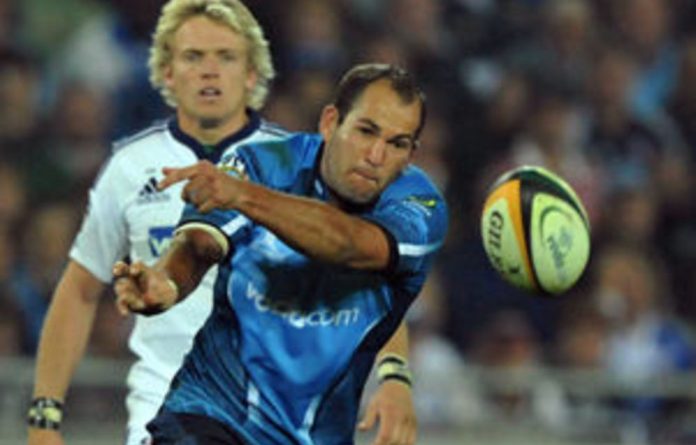 It only took three straight defeats on tour to plunge Springbok rugby back into crisis. Suddenly the world champions have lost their support base, the coaching team is at loggerheads and it’s time for a radical overhaul. That, at least, is what you’d think if you believed all the rumours flying around.

Fourie du Preez doesn’t agree. His decision to go under the surgeon’s knife to repair his troublesome shoulder, at the end of the Bulls’ successful Super 14 campaign, has left him outside looking in. Many are pointing to the scrumhalf’s absence as the single most important missing ingredient of the national team. He demurs.

“I don’t think my absence is that important,” he said. “Three weeks ago the team was in a good place and in that first Test they had opportunities, but it didn’t go according to plan. When they lost the second Test, it became a confidence thing. Then people start asking the obvious questions like, ‘Is the team too old, and is there a problem with the coach?’ The team isn’t immune to stuff like that and it begins to undermine their confidence,” said Du Preez.

“But we went through the same thing in 2006 and won the World Cup the following year. That season we won only three out of 10 Tests, but we knew we weren’t a bad team. It was just a question of focusing on what we wanted to do as a team and making sure that we were all on the same page. Ultimately, winning the World Cup is about playing well for seven weeks, so what happens now doesn’t really have an impact on that.”

As for the team being too old, Du Preez makes the point that, while Danie Rossouw (32), John Smit (32) and Victor Matfield (33) can be considered long in the tooth, the rest of the team is under 30. And the banning of Bakkies Botha and the season-ending injury to Andries Bekker does not concern him either: “I don’t think we are running out of lock forwards. It’s a position where we actually have a lot of depth. I also don’t think that Victor is past it. If you watch the games closely, he still has a big impact and I think he’s got a good year left in him. The World Cup is his target and he’ll be up for it.”

Matfield’s status among both colleagues and opponents suggests he is worth slapping a preservation order on, but what of Smit? The captain is once again under the spotlight, even though he has returned to his favoured position in the middle of the front row. Du Preez sees beyond Smit’s contributions on the field.

“John is great at clearing the way for us to play our game. He takes on the burden of talking to sponsors, giving quotes to the media, attending Saru management meetings and all the stuff that can get in the way of you focusing on the important thing, which is to play your best on Saturday.”

Plainly, however, the current side was not playing their best on Saturday. If you wanted to look for reasons, in addition to the enforced absence of Du Preez, remember that for many and various reasons Bismarck du Plessis, Bakkies Botha, Heinrich Brussow, Juan Smith, JP Pietersen and Francois Steyn are unavailable. Du Preez also points out that the All Blacks aren’t bad at the moment.

“New Zealand have got a good side this year, much better than they have had for a few seasons, but I still don’t think they can win the World Cup. I wouldn’t say that they are peaking too early, it’s more a case of getting your focus right. The pressure will be on them playing at home and they have a track record of losing relatively easy games. I think that might happen again.”

Critics in New Zealand have been quick to dismiss the Boks as dinosaurs, unable to adapt to new law interpretations intended to stifle their kicking game. Yet the only real problem with the tactic is that Du Preez’s educated feet aren’t there to direct the attack.

“I don’t agree with the criticism. If you look at the first Test against New Zealand, they dropped the first five high balls that we put on them. They don’t have an answer to the tactic as long as it is done accurately and that’s probably why they want people to think it doesn’t work any more.”

Du Preez will be available for the start of the new Super 15 next year and has signed to play for Suntory Sungoliath in Japan at the conclusion of the World Cup. He will be playing under the watchful eye of Eddie Jones, the former Wallaby coach who helped the Boks to victory in 2007. “I think Eddie’s input was vital at the World Cup and that’s part of the reason that I decided to sign for his team in Japan. When I made the decision, I felt that my body wouldn’t last much longer and I’d made my peace with the fact that the World Cup would be the end of my Springbok career. But now I’m not so sure. I’m feeling pretty good and the rehab is going well, so who knows?”