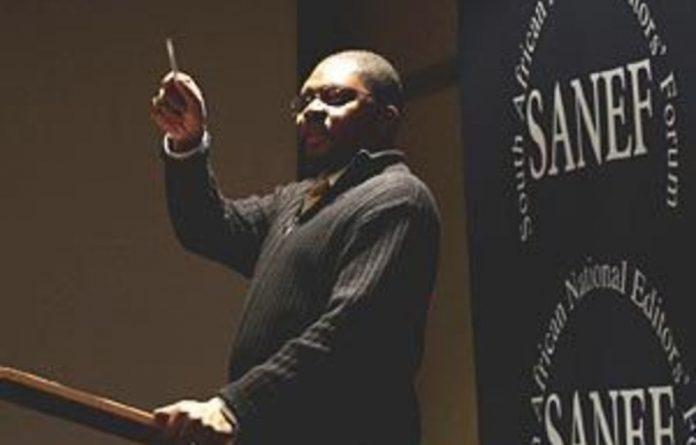 As editors met on Wednesday to discuss the “horrors” of an African National Congress (ANC) onslaught against media freedom, the Hawks arrested a Sunday Times journalist who wrote an article critical of the national police chief on the weekend.

A day after national police commissioner General Bheki Cele called Mzilikazi wa Afrika a “very shady journalist”, he was marched out of his offices at the Avusa building in Rosebank, Johannesburg, just as editors emerged from a meeting about media freedom.

Sunday Times editor Ray Hartley, who attended the South African National Editors’ Forum (Sanef) meeting, said the paper’s lawyers had been unable to get a clear answer from the police on the charges against him and where he was being held.

“I am deeply concerned at the fact that a journalist can be arrested and held at an undisclosed location in a country where the rule of law ought to apply,” Hartley said in a statement posted on the Times Live website.

“He was arrested by a large number of policemen in an operation which was clearly designed to intimidate, and I can only conclude that this was the true motive for what took place today [Wednesday].”

Hartley said Wa Afrika was one of the authors of a story published on Sunday about the rental of new police headquarters at the cost of R500-million, allegedly without following the correct tender proceedings.

“I hope, for the sake of our country, that he was not arrested on spurious charges in order to punish him for what he wrote,” said Hartley.

Initially, the Times Live reported that Wa Afrika was arrested for the possession of what police claimed was a fraudulent letter of resignation from Mpumalanga Premier David Mabuza to President Jacob Zuma.

“Wa Afrika was seized by police, who became involved in a screaming match with senior editors about whether photographers could take pictures or not,” reported Times Live.

Hawks spokesperson Musa Zondi said he would face charges of fraud and defeating the ends of justice.

Criticism
The arrest came a day after Cele criticised Wa Africa at a press conference, where he called the Sunday Times article “incorrect and worse, misleading”.

Cele told reporters in Pretoria that he did not sign a lease agreement — only a needs assessment.

“That one is a very shady journalist, very shady. He was expelled from the Sunday Times. Why did they bring him back?” asked Cele.

Asked if he would consider legal action against the publication and the journalists, he replied: “Time will tell,” but added that he had not yet consulted with his lawyers.

Cele was referring to a case in 2004, when the Sunday Times dismissed Wa Afrika for allegedly trying to help a Travelgate-accused leave the country while he knew she had been arrested in the Parliamentary fraud scandal.

At that stage, then-editor Mondli Makhanya said while the award-winning Wa Afrika was “one of the finest journalists to have worked for this newspaper”, his actions had caused damage.

“Our relationship of trust with our readers is paramount and no damage to this trust can be tolerated,” Makhanya said in a statement issued in 2004.

‘Every single mistake will be used against us’
On Wednesday, Makhanya, who is now the chairperson of Sanef, cautioned editors and journalists that the ANC would use mistakes by journalists as ammunition to push through the Media Appeals Tribunal.

“I think one should look at the climate in which this Bill has been brought in … It becomes a horrifying list of repressive acts against the media by the government,” Louw told the discussion.

“… This poses all kind of horrors in the gathering of information.”

Makhanya said there was a “mobilisation against the media”, not only on a political level but also among communities on the ground.

He warned it was likely that the government would pass the Media Appeals Tribunal for print media through Parliament by the end of the year.

Academic Anton Harber said that journalists needed to realise the government would use any mistakes in the media as excuses to go ahead with statutory regulation.

“We must know, every single mistake will be used against us,” said Harber.

Avusa public affairs editor Thabo Leshilo said the media needed to realise its power and that it should act responsibly.

“Self-regulation requires, when we make mistakes, we do corrections prominently,” said Leshilo.

“The [African National Congress Youth League] is totally in support of the establishment of a media tribunal which will adjudicate over wrong reporting by all media and ensure that they are taken to task for falsifying stories, sensationalism and spreading lies that seek to undermine the integrity of individuals and organisations,” a statement read on Wednesday.

The ANC wants an independent statutory body accountable to Parliament to deal with complaints against newspapers, instead of only using the press ombudsman, who currently deals with complaints.

It released a discussion document, entitled “Media transformation, ownership and diversity”, last week, as a follow-up to a resolution taken at the ANC’s Polokwane conference in December 2007 that a proposal to set up a tribunal for print media be investigated. — Sapa