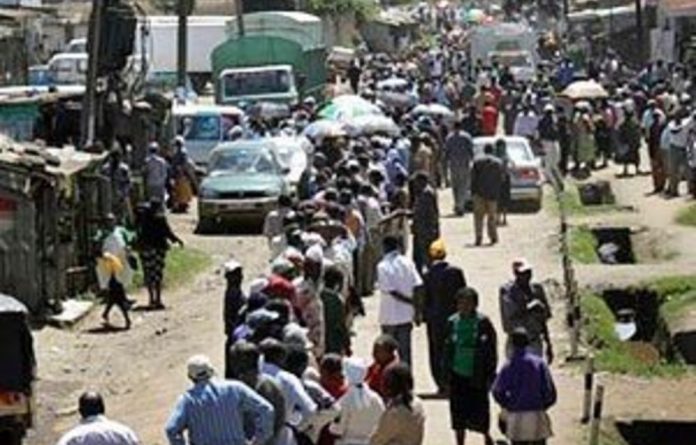 Kenyans voted in favour of a new constitution in a peaceful referendum that could reshape the political landscape of East Africa’s largest economy, according to partial results published on Thursday.

With provisional results from half of the country’s 210 constituencies, 67% of Kenyans had backed the charter, making it extremely unlikely the “No” camp could catch up.

Kenya’s leading newspapers were in no doubt about the outcome: “Kenya says Yes” and “Yes it is” were the headlines splashed on the front of the two main dailies.

After years of disputed, violent elections the charter is seen as important to avoid a repeat of the post-election tribal bloodshed in early 2008 that killed 1 300 people and pushed the country of about 40-million people to the brink of anarchy.

The changes put to voters on Wednesday allow for greater checks on presidential powers, more devolution to grassroots administrations and an increase in civil liberties.

The new legal framework addresses the corruption, political patronage, land-grabbing and tribalism that have plagued Kenya since it won independence from Britain in 1963.

Television pictures showed voters in the Indian Ocean port city of Mombasa dancing and cheering at what they said was likely to be a resounding victory for the “Yes” camp.

“It does appear that ‘Yes’ is winning overwhelmingly … but we should not come out of this with the division of winners and losers,” Foreign Affairs Minister Moses Wetangula told Reuters at the national counting centre in Nairobi.

“This is part of the healing process from the electoral difficulties of 2007.”

No major incidents were reported at Kenya’s 27 689 polling stations. About 12,5-million people were registered to vote and the turnout based on the published results was about 70%.

By 4am GMT, the “Yes” camp had 4,2-million votes with 2,1-million against. The final results are likely later on Thursday.

Satisfied
Regional election observers said they were satisfied with the voting process, and called for calm during the count.

A small group of “No” campaigners said the vote had been rigged in favour of the “Yes” camp. They were angry at a new electronic system used to transmit votes from polling stations to the national counting centre, from where they were broadcast live on television.

The complaints were brushed aside by the electoral authority, which said the process simply improved transparency, and had proved robust when used in two recent by-elections.

On Wednesday, there were long queues at polling stations, especially in the capital Nairobi and the Rift Valley centres of Eldoret and Nakuru that were at the centre of the 2008 violence.

The western heartland of Prime Minister Raila Odinga had the highest turnout — and a crushing defeat for the “No” campaign.

Asked if the law would be a panacea for Kenya’s ills, one Cabinet minister said more work was required to implement it.

“It will give us a good base but we must have good leadership. We must have commitment to the document, so it is as good as we make use of it in the right way,” Lands Minister James Orengo said.

A previous attempt to change the constitution through a referendum in 2005 failed.

Bargaining power
William Ruto, a Cabinet minister based in the Rift Valley who led “No” campaigners angry about clauses related to land ownership, said he would accept the outcome.

In Eldoret and Nakuru, some voters said they hoped the referendum would lead to a new era of peaceful democracy and pledged an end to violence between Kikuyu and Kalenjin — the two tribes that have dominated politics since independence.

Twenty-seven-year old David Mutai, a banker in the Ruto stronghold of Eldoret, said he would accept the result.

“For the first time the process has been free and fair. There will be no problem here, we are co-existing with other tribes,” he said, while tucking into his breakfast on Thursday.

Kenya, which borders Somalia, Ethiopia, Sudan, Uganda and Tanzania, is the fourth largest economy in sub-Saharan Africa after South Africa, Nigeria and Angola.

Analysts said the new electronic counting process was more transparent than in 2007, when allegations the poll was rigged in favour of President Mwai Kibaki sparked the bloodletting.

The new charter was a key provision in the power-sharing deal struck between then-rivals Kibaki and Prime Minister Raila Odinga to end the violence after the 2007 election. — Reuters