‘I am Madiba’s lost daughter’ 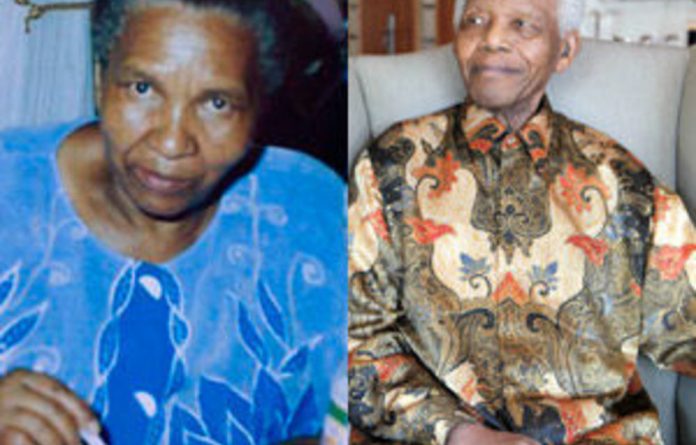 Dear Tata, Please kindly be advised that this is not an easy letter for me to write. However, pardon my request as it touches on a very long-outstanding sensitive and confidential matter. My request therefore it is to kindly request you to let me meet you, as I believe you are my father and I am your daughter.

These were the last words written by 63-year-old Mpho Pule in August 2009 in an emotional letter to Nelson Mandela, a man she believed was her father. In September, a month after she wrote the letter, Pule died from a stroke in her home in Bloemfontein.

A former bakery worker, who was a mother to six children and grandmother to 12, Pule never got to read the letter from the Nelson Mandela Foundation sent in October 2009 saying that “all the information provided by you has been verified”.

Pule, who bore a striking resemblance to the former president, began trying to meet Mandela in 1998 after being told of her father’s identity by her grandmother. Her own mother, Seipati Monakali, had died with the secret years earlier.

Pule made many phone calls to the foundation over the years — in vain. Finally she enlisted the help of a family friend, Martin McKenzie, a primary school teacher from her community of Bochabela in Bloemfontein, to act as an intermediary. McKenzie has sent 13 letters since 2005, which the foundation and Mandela family initially received with suspicion — they believed he was interfering in a sensitive family matter that should be dealt with by the two families involved.

At the end of each letter from the foundation, McKenzie was reminded not to contact the media.

But after Pule’s death and a meeting with her children, who felt they owed it to their mother to try to meet Mandela, McKenzie decided to go public. Last week he told the Mail & Guardian that he never doubted the sensitivity of this matter, which is why he followed every instruction from the foundation, the Mandela family and Pule’s family to keep her secret under wraps.

His biggest fear, he said, along with that of the Pule family, was how the news would affect the ageing former statesman. Before handing me the documents that would show the trail of letters that flowed for years, McKenzie hesitated a moment. He sat me down in his mother’s small kitchen in Soweto, placed his hands on my head and said a prayer.

“Heavenly Father, I’m putting all my trust in this young woman and I pray that you give her the strength to tell this story the way Mme Mpho would have wanted it to be told. Amen.”

It was in 1998 that Pule learned the identity of her father from her 85-year-old grandmother, Winfred Monakali, a former law firm secretary, who lives in Bloemfontein. The letters in possession of the M&G tell the story of Pule’s mother, Seipati Monakali, who met Mandela in Cape Town in 1945, where they had a brief affair.

Three months after Pule’s birth, Monakali moved to Bloemfontein, where she married David Itholeng and had three more child­ren. She died in 1992 without telling Pule about her father.

After her initial approach to the foundation failed in 1998 Pule visited the local municipal offices to get a schedule of events Mandela would be attending in Bloemfontein. She planned to introduce herself and make arrangements for a meeting.

During one of his visits to a Medi-Clinic in Bloemfontein, Pule scrambled through his security and past the throngs of reporters and photographers to get a glimpse of him.

A picture obtained by the M&G shows a disappointed Pule being blocked by one of Mandela’s security personnel as he gets into a car. She asked for a copy of the picture from one of the media photographers.

McKenzie continued to write to the foundation on Pule’s behalf. He said he eventually received a call from Verne Harris, the project manager for the Centre of Memory at the foundation, in August last year telling him that an investigation had been instituted and that they needed Pule to write them a letter giving a brief account of her background.

Pule then told her story in her own words, sending off her letter in August last year.

After that, McKenzie said Harris told him telephonically that the Mandela family had been informed about the matter. But it was too late for Pule — a written response from the foundation arrived a month after her death. In the letter, dated October 6 2009, Sello Hatang, communications manager at the foundation, confirmed that an internal investigation had authenticated the documentary record supplied by Pule and confirmed that it matched the biographical and historical record of Mandela’s life.

Hatang wrote: “We have regarded the matter as one of great importance, and consequently appointed a senior staff member [Mr Harris] to deal with it. He has kept in touch with you throughout, has ensured that all the information provided by you has been verified and has liaised closely with Mr Mandela’s family.”

In her own words

In Pule’s four-page letter she describes growing up without ­knowing who her father was.

“In all my born days, I have never known as to who is my father as my mother, Seipati Jane Monakali, never wanted to share this information with me. As I believe that she was trying to protect me.

“As a matter of fact, my other grandmother namely Miss Winfred Nosipho Monakali, has always known about who is my father. Where upon in 1998 after I have personally confronted her as to who is my father. In response, quite verbatimly, she said to me ‘your father is Nelson Mandela’.”

She gives a detailed background about her childhood and the stories she was told about her father.

“I remember that when I was still young you used to write my grandmother some letters, notifying us as to when will you pay us a visit. And you also used to send some money through one of the old founder members of the ANC.

In conclusion she wrote: “I tried in vain to request a meeting with you by writing letters to your offices. For some reason, as it appears these letters have never reached you. All this considered, it is almost 12 years since I have been waiting with the hope that one day, as they say once in a blue moon, I will have a lifetime opportunity of meeting my honorable father, in our lifetime.”

When McKenzie told the foundation about Pule’s death and requested a meeting with Mandela and his grandchildren, Hatang referred him to the Mandela family instead.

“I hereby request that one of the senior uncles in the family, as is tradition, contact Ms Zindzi Mandela in order to secure a meeting and find finality to this matter,” wrote Hatang.

In a letter dated December 30 2009 to Zindzi, McKenzie pleaded: “We kindly wish to submit a humble request for a meeting between the two families.

“We trust that you are somehow informed about the nature of this matter, as the verification process of the submitted information is successfully completed by the foundation.”

Three months later Zindzi responded, confirming that she had been told about the outcome of the investigation.

“As Mr Sello Hatang of the NM Foundation has previously advised you, it is our custom that the affected families communicate directly and not through an intermediary.

“Would you therefore kindly ask the relevant members of the Pule family to contact us? We will no longer be dealing with this matter through you.

“We trust that you shall not forward this email or any further communication to the media,” she wrote.

This was the last communication from the Mandela family and two letters since, written by Pule’s eldest daughter Goitshasiwang Segopa to Zindzi in April this year, have gone unanswered.

Verne Harris of the Nelson Mandela Foundation told the M&G that the foundation handles an enormous volume of letters on behalf of the family, including occasional claims of paternity.

In almost all instances, he explained, these claims are without merit. “It’s our job to protect the family by filtering these claims and ensuring that only those which reach a certain standard of plausibility are taken further.”

This process, Harris said, involves a basic test of whether the claim matches the historical record — “for example, was Madiba in prison at the time the child was allegedly conceived … that is the first hoop they have to get through”. The second, he said, is verification of the documentary record. “In this case, unlike nine times out of 10, both hoops were cleared, and this is the point at which we hand the matter over to the family.” Harris said that this did not constitute absolute proof that Pule was Mandela’s daughter in the way that a DNA test would.

He confirmed that the information was passed on to Zindzi Mandela and that she had started the process of getting in touch with the Pule family.

Attempts to contact Zindzi directly were unsuccessful. However, she told the M&G through the foundation’s communication manager, Sello Hatang, that the family was still mourning the death of Zenani Mandela and that she would assign an elder from the family to respond, but could not say when that might happen. No statement had been received by the M&G‘s print deadline. Other family members referred us to Zindzi and further attempts to contact her before going to print were also unsuccessful.