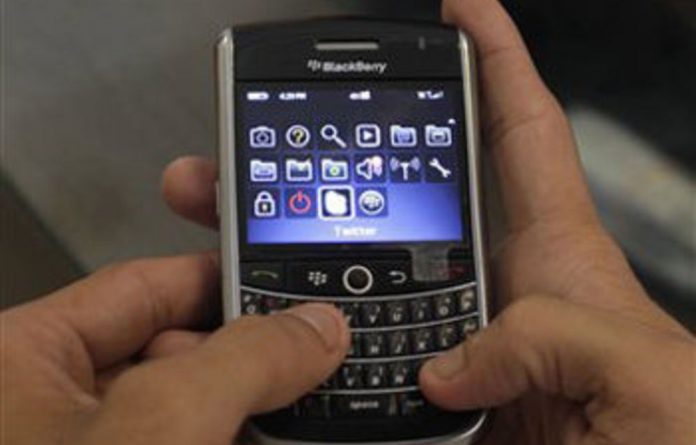 Saudi Arabia and BlackBerry maker Research In Motion are making progress in talks over access to the device’s encrypted network, a source close to the negotiations said, and the kingdom had yet to carry out threats to cut its Messenger service early Friday morning.

Canada also said it is talking to Saudi Arabia and the UAE to resolve a fight over BlackBerry security that could jeopardise the growth of RIM, the country’s most important tech exporter.

RIM is facing mounting pressure to open up its super-secure network to government scrutiny. A growing number of countries are demanding access to encrypted communications sent through the device, saying national security may be at risk.

In addition to Saudi Arabia and the United Arab Emirates, India is in talks with the company over gaining access, and both Lebanon and Algeria, according to a newspaper report, are reviewing the situation and might soon also might join the list.

The Saudi talks have led Research In Motion to consider locating a server in the kingdom to handle some of the BlackBerry network’s encrypted communications, Al-Hayat newspaper’s online edition said on Friday in an unsourced report.

“RIM showed on Thursday a degree of flexibility that has not been there over the past three months. Progress is being made. We started debating the technicalities of new setups,” the source told Reuters.

US Secretary of State Hillary Clinton, who has promoted internet freedom as a basic human right, said the United States will hold talks with the UAE and other countries on the issue.

Canada, where RIM is based, is concerned about the looming ban and its “broader implications”, Trade Minister Peter Van Loan said in a statement. He said Canadian officials were working with RIM, Saudi Arabia and the UAE to find a solution.

“Canada has been working closely with the officials at Research In Motion as well as with governments on the ground to assist them in dealing with these challenges,” the minister told reporters in Ottawa.

Shares of RIM fell about 2% on Thursday on the Nasdaq and Toronto stock exchanges. The stock has shed about 9% since the UAE threatened over the weekend to ban BlackBerry email, messaging and internet services after three years of negotiations with RIM over access to user data.

RIM is in an unusual position of having to deal with government requests to monitor its clients because it is the only smartphone maker that manages the traffic of messages sent using its equipment.

Although the Gulf region accounts for only a small portion of RIM’s more than 41-million subscribers, analysts said they were concerned about the impact on the Canadian company’s reputation for providing iron-clad smartphone services.

“The company has to stand its ground … they’ve built their loyalty largely around security,” said Nick Agostino, analyst at Mackie Research Capital.

Politics
RIM has said its technology will not allow a third party to monitor communications running through the BlackBerry’s enterprise servers. Co-CEO Michael Lazaridis, in an interview with the Wall Street Journal, accused governments of picking on smartphones to score political points.

“This is about the internet,” Lazaridis was quoted as saying. “Everything on the internet is encrypted. This is not a BlackBerry-only issue. If they can’t deal with the internet, they should shut it off.”

Governments from China to Iran have become more vocal about controlling conversations on the internet and on cellphones, citing risks to national security.

Disputes between government regulators and technology providers have escalated into diplomatic disputes, such as the one between China and Google over internet censorship and cyber attacks earlier this year.

Clinton, who had also waded into the Google-China dispute, said on Thursday about the BlackBerry issue: “We are taking time to consult and analyse the full array of interests and issues at stake because we know that there is a legitimate security concern, but there is also a legitimate right of free use and access.”

Some analysts said it may be difficult for governments to get what they want.

“I think their expectations are unrealistic over the long term to maintain the kind of control that they’re looking for. They’re really trying to put the genie back in the bottle here,” said Kevin Restivo, a senior mobile phone analyst at IDC.

Algeria became the latest government to join the fray, saying it is reviewing the use of the BlackBerry and that it will ban the devices if it concludes they are a threat, according to a report early on Friday.

“We are looking at the issue. If we find out that it is a danger for our economy and our security, we will stop it,” the El Khabar newspaper quoted Telecommunications Minister Moussa Benhamadi as saying.”

Lebanon said on Thursday it was studying security concerns related to the BlackBerry and would begin talks with RIM.

India, worried that BlackBerry’s secure messaging services could be misused by militants, has demanded more access for its security agencies, and the country’s telecoms minister said it had not reached an agreement with the company.

“India has made these threats time and again and India’s starting to sound like the boy that cried wolf, a little bit, because RIM continues to maintain service there and has talked to the government many times and come to resolutions over the course of time,” said Restivo.

RIM has said BlackBerry security is based on a system where customers create their own keys. The company neither has a master key nor any “back door” to let RIM or third parties to gain access to data. – Reuters