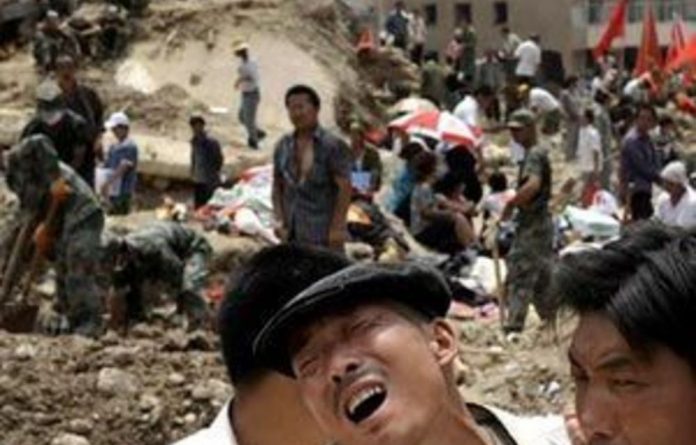 The death toll from China’s worst mudslides in decades more than doubled to 702, officials said on Tuesday, as hopes faded that rescuers would find many of the 1 000 people still missing.

At least three villages were levelled by an avalanche of mud and rocks triggered by heavy rains on Saturday in a remote area of the north-west province of Gansu — the latest disaster as China battles its worst flooding in a decade.

A 52-year-old man was pulled alive from his toppled apartment building on Tuesday, more than 50 hours after the disaster, and other rescue teams heard “very faint” signs of life in another area, the state news agency Xinhua said.

But the director of Gansu’s civil affairs department, Tian Baozhong, painted a grim picture, telling reporters that the death toll had more than doubled overnight, but the number of missing had dropped only slightly to 1 042.

With rain forecast for the rest of the week, which could further complicate search-and-rescue efforts, Premier Wen Jiabao urged the thousands of rescuers in hard-hit Zhouqu to hurry, but acknowledged the task would be an arduous one.

“We must fully realise the difficulties for the search-and-rescue work,” Wen was quoted as saying by Xinhua.

“You must race against the clock and spare no efforts in saving lives.”

President Hu Jintao presided over a meeting of senior Communist Party leaders on Tuesday on how to handle the crisis, Xinhua said.

More than 7 000 soldiers and rescuers were hunting around-the-clock for survivors in Zhouqu, the county seat, where homes were torn apart and streets buried in mud as deep as 2m.

“My older brother is buried here. He was on the ground floor,” Chen Xue (45) said, pointing at a house submerged in mud. Only the third floor poked through the sludge.

“I will wait here until they bring him out,” he said, acknowledging that his brother had likely died in the disaster, as rescue workers used shovels and picks to go through the mess, some with the help of sniffer dogs.

Floods triggered
The landslides swept mud, houses, cars and other debris into the Bailong River running through Zhouqu, choking off the waterway and triggering flooding in the mountainous area, the government said.

The Bailong remained flooded on Tuesday, with only the tops of street lamps visible above the water line, an Agence France-Presse correspondent saw, as Zhouqu residents queued for food and bottled water.

The mudslides levelled an area 5km long and 500m wide, Xinhua said. Floodwaters up to three storeys high have submerged half the county, where one-third of the population is Tibetan.

Roads and bridges have also been destroyed and teams worked feverishly to repair the damage so aid supplies could get through to the tens of thousands in need, after what state media said were China’s worst mudslides in six decades.

Odour of death
In the centre of town, the pungent odour of death was overpowering. Residents wandered about searching for their relatives. Tibetan women cried and chanted in mourning for the victims.

Relatives will be given 8 000 yuan ($1 200) for each family member lost, Chen Jianhua, communist party chief of Gannan Tibetan Autonomous Prefecture, said on Monday.

The provincial government issued weather warnings for the rest of the week, saying rains could aggravate the situation on the ground.

Workers were still trying to clear debris from the Bailong and drain a barrier lake that had formed, which Vice-Premier Hui Liangyu said posed a “great threat” to residents, Xinhua reported.

China’s minister of land and resources, Xu Shaoshi, attributed the disaster to several factors: heavy rains; the 2008 Sichuan earthquake that destabilised the nearby mountains; and sustained drought and soil erosion.

The government had said more than 2 100 people were dead or missing nationwide in flood-related disasters before the Gansu mudslides. More than 12-million others have been evacuated from their homes. — AFP