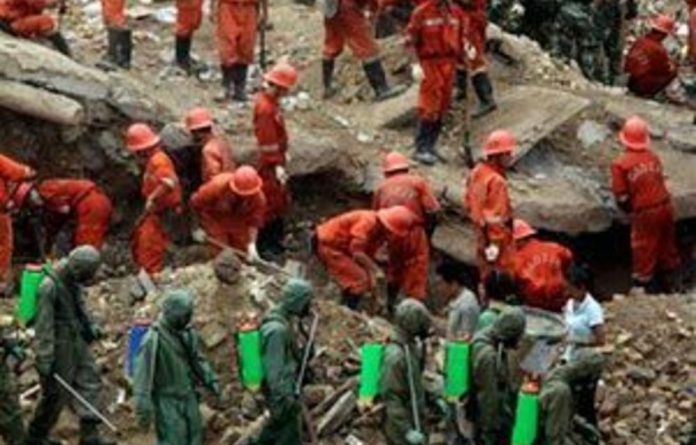 Rescuers racing against a potential new deluge on Wednesday hurried to drain an unstable lake formed by China’s worst mudslides in decades, as hopes of finding any more survivors faded.

More than 10 000 soldiers and rescuers combed through the mountains of mud that buried a remote area of the north-west province of Gansu at the weekend.

The death toll rose to 1 117, with 627 more missing, the government in Zhouqu county, where the disaster took place, said in a statement Wednesday.

But the window of survival was fast closing, with only one survivor found in a flooded hotel on Wednesday, so authorities have focused on averting further devastation in the form of new floods and possible disease outbreaks.

With days of heavy rains forecast from Wednesday — sparked in part by Typhoon Dianmu, which ravaged South Korea — troops were using excavators and explosives to clear debris blocking the Bailong River that runs through Zhouqu.

The rubble has created a lake that, if it were to burst, could bring further destruction to areas already levelled by the avalanche of sludge and rocks, though officials insisted the risk had been minimised.

“The danger of the barrier lake collapsing suddenly has been basically eliminated,” the vice-minister of water resources, Jiao Yong, told a press conference in Beijing.

A continuous stream of rescuers trudged through the zone, bearing the dead on stretchers, an Agence France-Presse correspondent witnessed early on Wednesday. Carts of coffins were seen at the roadside.

At least a dozen bodies were laid out at a makeshift morgue in the heat, awaiting identification. Most were covered, but one was out in the open. The stench was overwhelming, causing some residents to gag and others to run past.

Hundreds of medical workers have been sent to the disaster zone along with experts in epidemic prevention amid fears of an outbreak of water-borne disease, but so far, no such problems have been reported, a Health Ministry official said on Wednesday.

Tens of thousands of people were without adequate food and drinking water, as many roads leading to the area were damaged, leaving much-needed supplies stuck on trucks. Residents, on foot, carried goods in baskets on their backs.

“The amount of traffic is much higher than before, so all roads leading to Zhouqu are congested, which has negatively impacted the smooth progress of relief work,” said Yang Yongzhong, head of the Gansu transport department.

One volunteer told AFP it was hard to find safe ground to erect tents.

The mudslides levelled an area 5km long and 300m wide, Xinhua said. Floodwaters up to three storeys high have submerged half the county, where one-third of the population is Tibetan.

The landslides swept homes, cars and debris into the Bailong, choking off the waterway and triggering flooding in the mountainous area.

In Zhouqu town, workers tried to clear streets buried in thick mud and debris from more than 300 destroyed homes, but some residents wailed, hoping the bodies of their loved ones could still be found for burial.

“It’s hard to stop searching and let them down,” Ren Tianwen, commander of hundreds of armed police in the zone, told Xinhua.

Officials defended their efforts to warn residents of impending natural disasters, saying Zhouqu was particularly susceptible to such occurrences.

“The area has been one of the key regions monitored by the local government,” Guan Fengjun, a senior water resources ministry official, told a press conference in Beijing. — AFP