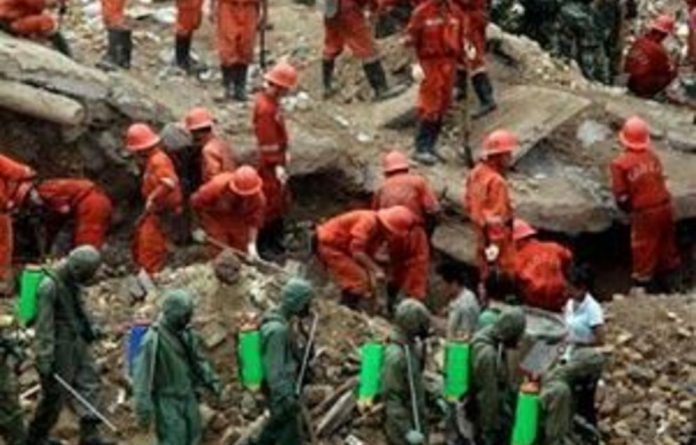 Fresh heavy rains on Thursday brought more misery to a town in north-west China devastated by mudslides that have already killed more than 1 100, with new floods leaving more people missing.

Thousands of soldiers and rescuers at the scene were battling to clean up roads blocked by cascades of mud and sludge unleashed by storms overnight, complicating the task of getting food, water and medicine to those in need.

So far, 1 117 people have been confirmed dead in the disaster in Zhouqu, a town nestled in the mountains of Gansu province. Another 627 residents went missing at the weekend, and three more disappeared overnight, state media said. “The rain has had an impact on rescue work. It’s hindering the distribution of drinking water,” Han Huiping, a 25-year-old firefighter from a nearby town working on the relief effort, said. “We’re worried.”

Soldiers and residents told Agence France-Presse that heavy rains fell for about four hours overnight, turning one of the main streets in Zhouqu into a small river and flooding army tents on the roadside leading into the disaster zone.

Workers used diggers to clear the massive avalanche of mud and rocks that basically split the town in two at the weekend as rain fell early on Thursday. The peaks surrounding the town were shrouded in dark clouds.

The shortest route into Zhouqu from the provincial capital, Lanzhou, mainly being used by relief crews, was blocked, the official Xinhua news agency reported.

Some shops in town had run out of drinking water well before noon, but new supplies appeared to be trickling in, an AFP correspondent witnessed.

“We’re really worried, but there is nothing much we can do,” said one villager, who asked not to be named.

The bad weather was expected to continue at least through to Friday.

Barrier lake
The water level in the Bailong River, which cuts through Zhouqu, was higher on Thursday than the day before, and flowing more quickly, an AFP correspondent saw. State media said the level had risen by t3m.

Troops were using excavators and explosives to clear blockages in the river and drain a barrier lake created by the rubble that, if it were to burst, could bring further destruction to areas already levelled by the torrent of mud.

Officials insisted on Wednesday the risk had been minimised.

“The danger of the barrier lake collapsing suddenly has been basically eliminated,” the vice-minister of water resources, Jiao Yong, told a press conference in Beijing.

The mudslides levelled an area 5km long and 300m wide, Xinhua said. Floodwaters up to three storeys high have submerged half the county.

Tons of garlic and Sichuan pepper, which some experts believe to be helpful in the prevention of certain ailments, have been sent to Zhouqu, the local health bureau said, according to the China Daily.

Doctors were encouraging relatives to cremate the remains of their loved ones as soon as possible to prevent health problems, but traditional burials are preferred in the area with a population that is one-third Tibetan.

Nearly 800 medical workers — also concerned about how the high summer temperatures could affect the precarious public health situation — have been dispatched to the scene, state media said.

Loudspeakers in town broadcast messages instructing residents how to protect themselves from disease. So far, no major problems have been reported.

The mudslides are the latest in a string of weather-related disasters, as China battles its worst flooding in a decade. More than 2 100 people were left dead or missing and 12-million evacuated before the Gansu tragedy. — AFP