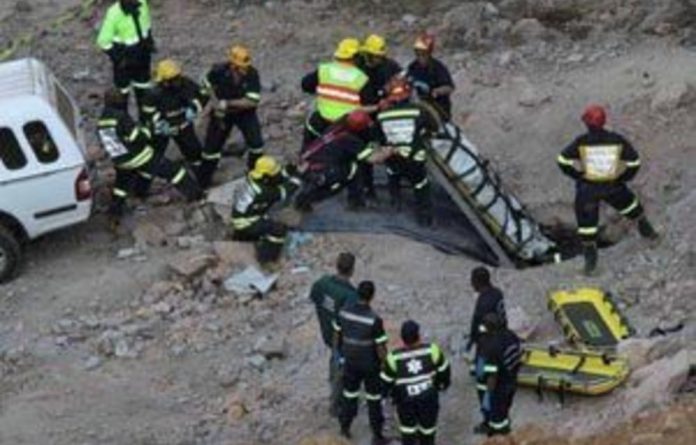 Uncertainty shrouds the cause of death of four men — allegedly illegal miners — whose bodies were found on Thursday in an underground ventilation shaft at a mine belonging to troubled Ekurhuleni mining company Aurora Empowerment Systems.

The mine, in Benoni, was sealed off by police on Thursday morning amid rumours that police national commissioner General Bheki Cele was due to visit. Cele had not arrived by the time of going to press.

President Jacob Zuma’s nephew, Khulubuse Zuma, and the grandson of former president Nelson Mandela, Zondwa Mandela, are on Aurora’s board.

Miners who claim to have witnessed the incident told the Mail & Guardian that a total of 13 miners had been killed, allegedly by security personnel guarding the mine, which has ceased operating.

The Sowetan newspaper reported on Thursday that 20 illegal miners had been killed by security guards at the mine on Monday.

But Benoni emergency workers insisted that the deaths had resulted from an underground firefight between two groups of illegal miners.

Rodgers Mamaila, spokesperson for Ekurhuleni emergency services, said that “there are too many people speaking on this issue. The story we have is that there were two groups of illegal miners mining here, squabbles arose, and then they started shooting each other”.

Benoni police warrant officer Jannie van Aswegen confirmed that four bodies had been found underground, but could not say whether they were those of illegal miners.

Van Aswegen also said that the cause of death was unclear, as it was too dark to see clearly and the bodies had to be brought to the surface.

Police said they had only become aware of the incident when they received a complaint on Thursday morning, following the Sowetan‘s report.

Underground
Workers Norbert Mawine and Mpho Kwena told the M&G that they were underground when mine security personnel arrived.

“There were 30 or 40 underground when three white men and a black man came inside and started shooting. We ran away till we came out above ground by another tunnel,” said Mawine.

Kwena said that 13 workers were killed, but that on Monday night “people came and took their family members out”.

Kwena said he had lost friends in the incident and Mawine that he had lost a cousin. Mawine said that when they emerged from the mine there were “two Congolese men and a white man from the security company waiting outside”.

The security guards had taken them to the Springs police station, where they were later released.

On Thursday morning mine and emergency personnel took the initial precaution of sending a bomb squad underground. “We are cautious of booby traps, including homemade bombs, and there might still be men down there with guns,” one emergency worker told the M&G.

He said that illegal mining has been a problem at Aurora, and that in July two illegal miners had been killed at Aurora’s Daggafontein operation.

Witnesses and other sources claimed that a company, whose name they gave the M&G, had been involved in the alleged incident.

‘People take a chance’
But Aurora spokesperson Thulani Ngubane was unsure whether the company in question worked for the mine. Ngubane said that he was only aware of two companies, Delta Blue and Vusi Sizwe, under contract to provide security services.

“I cannot comment on the issue until the security companies have compiled a report,” he said, but he emphasised that illegal mining was a problem at Aurora. “There are all sorts of shafts … the mine is surrounded by squatter camps and people take a chance.”

A source at the scene said he believed that the illegal miners could come from the ranks of the 2 000 Aurora workers who unions say have not been paid since June. “Whoever went down there had to know these tunnels,” the source said.

National Union of Mineworkers spokesperson Frazy Namanyane confirmed that workers at Aurora have been paid nothing since June, and have not received their full salaries since March.

Aurora workers downed tools in April in protest against the company’s failure to pay them.