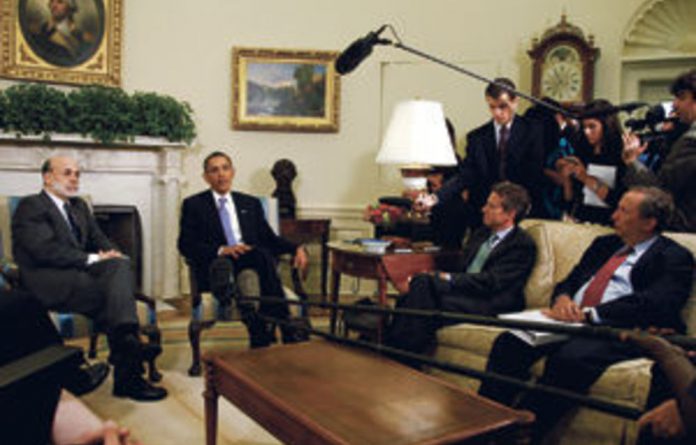 The United States Federal Reserve warned this week that a recovery in the world’s largest economy was likely to be “more modest in the near term” than anticipated, as the Bank of England pared back its growth outlook for the United Kingdom, heightening fears of a “double-dip recession”.

On Tuesday the Fed took a cautious step towards pumping extra liquidity into the financial system with an operation described as a ‘lite” version of quantitative easing, in response to a slowdown in the pace of the US’s economic recovery.

Expressing anxiety about the darkening outlook, the Fed’s open market committee said: “The pace of recovery in output and employment has slowed in recent months.” The Fed’s policymaking committee, chaired by Ben Bernanke, left interest rates unchanged at their ultra-low level of between zero and 0.25%.

In a measure meant to stimulate economic activity, the central bank said it intended to reinvest the proceeds of its maturing holdings of mortgage-backed securities by pumping the funds into treasury bonds. The Fed’s intervention, approved by a nine-to-one margin, served to soothe nervous markets.

On Wall Street, the Dow Jones industrial average had fallen by up to 100 points during the morning session but narrowed its loss sharply within minutes of the committee’s statement. By early afternoon in New York, the Dow was down 17 at 10 681 points.

Analysts cautiously welcomed the move, though some said it would be insufficient. Jeremy Cook, chief economist at currency broker World First in London, said that: “This is a bit of appeasement for the market. It’s the Fed buying itself a little bit more time. If it had just kept with the same policy language, it could have been accused of being asleep at the wheel if the economy fails to turn around.”

Citing shaky business and consumer confidence, tight bank lending and the government’s spending cuts, the Bank of England warned that Britain faced a protracted and “choppy recovery”, as official data showed a sharp rise in long-term unemployment and a smaller than expected fall in the number of people claiming jobless benefits.

The bank’s latest quarterly inflation report said it was in no hurry to raise interest rates from their record low of 0.5%. But with commentators increasingly debating whether the UK is headed for another recession, many economists said the bank was still too optimistic on growth.

The bank’s report, which forecasts economic prospects two years ahead, sees growth nearer 3% then, down from its previous prediction for about 3.5%. It also predicted inflation would fall to well below its 2% target in two years, helped by slack in the recovering labour market.

Presenting the report, governor Mervyn King said business and consumer surveys had weakened “quite markedly” recently, credit conditions were not easing as quickly as the bank had expected and the government’s fiscal measures would also dampen growth — although they would remove some long-term downside risks to the economy.

“Whereas crises occur suddenly, they fade only gradually,” King said. “It will take many years before bank balance sheets and fiscal positions return to anything like normal. In the meantime they will act as headwinds to the recovery.”

Rob Carnell at ING Financial Markets said, although the bank’s growth forecast was still high, the governor “sounded a good deal more cautious on growth than these figures suggest”. ING sees growth at about half the bank’s forecast in 2011 and 2012.

King echoed the government’s emphasis that the UK economy needed to be rebalanced away from private and public consumption and towards net exports after the latest data showed imports continue to dwarf exports.

The governor also highlighted troubles in key export markets, echoing the concerns of British businesses that the US could be heading for a double-dip recession whereas the eurozone countries would struggle as their governments pushed through fiscal reforms. ‘There is great uncertainty about the outlook for both the US and our [the UK’s] most important trading partner, the euro area,” said King. —