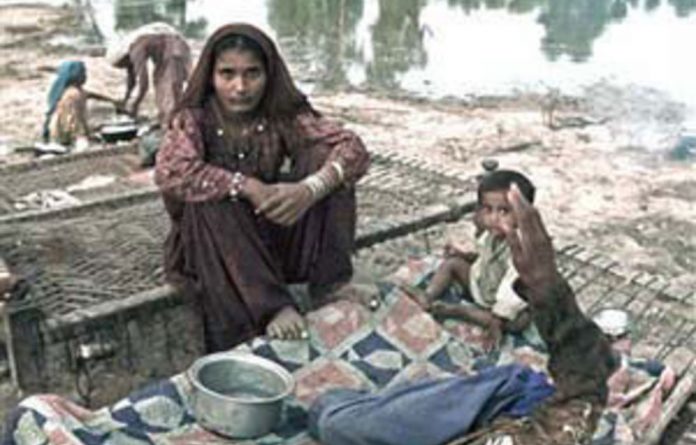 United Nations chief Ban Ki-moon flew into Pakistan on Sunday to visit areas ravaged by floods and urged the world to speed up aid for up to 20-million people hit by the country’s worst humanitarian disaster.

The UN has appealed for $460-million to deal with the immediate aftermath of the floods but has warned that billions will be required in the long-term with villages, businesses, crops and infrastructure wiped out.

Pakistan’s weak civilian government has appealed to the international community to help cope with the challenges of a crisis that Prime Minister Yousuf Raza Gilani has compared to the 1947 partition of the sub-continent.

Ban arrived on a Pakistan Air Force jet at Chaklala air base shortly before 6.30am GMT ahead of talks with President Asif Ali Zardari and Prime Minister Yousuf Raza Gilani, and a visit to the affected areas.

“I’m here also to urge the world community to speed up their assistance to the Pakistani people,” he said.

He said he would report back to the UN General Assembly first thing next week and “we will try to mobilise all necessary assistance and remember that the whole world is behind the people of Pakistan in this time of trial”.

Officials estimate that about a quarter of Pakistan appears to have been affected by the flooding.

Some of the worst-hit areas are in the volatile north-west, where Taliban militants have been locked in fighting with Pakistani troops, and the wealthiest and agriculturally most important areas of Punjab and Sindh.

Sluggish
UN agencies and aid groups say the response to the international appeal has been sluggish, warning of a second wave of death from disease with at least six million now dependent on humanitarian assistance to survive.

The nuclear-armed country of 167-million is on the front line of the US-led fight against al-Qaeda and Western governments have traced overseas terror plots back to Taliban and al-Qaeda camps in the lawless tribal mountains.

“The floods affected some 20-million people, destroyed standing crops and food storages worth billions of dollars, causing colossal loss to national economy,” Gilani said in a televised address on Saturday.

“I would appeal to the world community to extend a helping hand to fight this calamity.

“Outbreak of epidemics in the flood-hit areas is a serious threat, which can further compound the already grave situation,” Gilani said.

The United Nations estimates that 14-million have been affected and that 1 600 have died. The government in Islamabad has confirmed 1 384 deaths.

Celebrations cancelled
Pakistan cancelled all official celebrations for Independence Day on Saturday, as well as iftar dinners during the holy Muslim month of Ramadan and festivities for Eid in order to channel money into relief efforts.

In Muzaffargarh, one of the worst-hit cities in the central province of Punjab where hundreds of thousands of people had fled, local official Farasat Iqbal said the danger had now passed and that people were returning.

“Most people are coming back, although there is still fear and it will take time to return to normal,” said resident Malik Khizar Abbas.

Waters are still high and the UN has now confirmed the country’s first cholera case in Mingora, in the north-western district of Swat and said at least 36 000 people were reportedly suffering from acute watery diarrhoea.

Charities said relief for those affected by the worst natural disaster in Pakistan’s history was lagging far behind what was needed.

“There are millions of people needing food, clean water and medical care and they need it right now,” said Jacques de Maio, head of operations for South Asia at the International Committee of the Red Cross (ICRC).

“Clearly at this point in time the overall relief effort cannot keep pace with the overall scale of the emergency.”

Humanitarian agencies were monitoring the risk of “a second wave of deaths induced by the floods in the shape of water-borne diseases”, De Maio said. — AFP