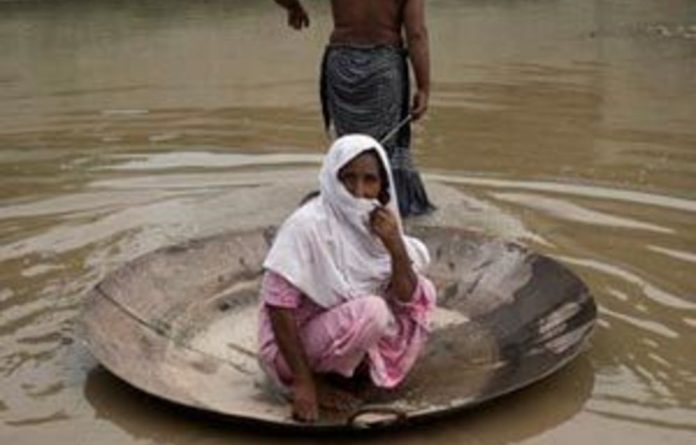 The United Nations warned on Monday that up to 3,5-million children were at risk from water-borne diseases in Pakistan’s floods and said it was bracing for thousands of potential cholera cases.

Fresh rains threaten further anguish for millions of people who have been affected by the country’s worst floods for 80 years, and UN Secretary General Ban Ki-moon has urged the world to speed up international aid urgently.

Described as the worst humanitarian crisis in the world today, the three-week disaster has affected 20-million people, and has destroyed crops, infrastructure, towns and villages, according to the Pakistani government.

The United Nations has launched an aid appeal for $460-million, but charities say the response has been sluggish and flood survivors on the ground have lashed out against the weak civilian government for failing to help.

Maurizio Giuliano, spokesperson for the UN Office for the Coordination of Humanitarian Affairs (OCHA), feared that Pakistan was on the brink of a “second wave of death” unless more donor funds materialised.

“Up to 3,5-million children are at high risk of deadly water-borne diseases, including diarrhoea-related, such as watery diarrhoea and dysentery,” he said, estimating the total number at risk from such diseases at six million.

No confirmed cases
Typhoid, hepatitis A and E are also concerns, he said.

“The WHO [World Health Organisation] is preparing to assist up to 140 000 people in case there is any cholera, but the government has not notified us of any confirmed cases,” the spokesperson said.

“We fear we’re getting close to the start of seeing a second wave of death if not enough money comes through, due to water-borne diseases along with lack of clean water and food shortages,” he said.

Cholera is endemic in Pakistan and the risk of outbreaks increases with flooding, but the government has so far confirmed no cases publicly.

One charity worker, speaking on condition of anonymity, told Agence France-Presse that several flood survivors had already died of the disease.

The UN estimates that 1 600 people have died in the floods, while the government in Islamabad has confirmed 1 384 deaths.

The floods have sparked rage against the government in the nuclear-armed country on the frontline of the US-led fight against al-Qaeda, where the military is locked in battles with home-grown Taliban in the northwest.

Several hundred people on Monday blocked the main highway linking the breadbasket of Punjab province to the financial capital Karachi, calling for assistance and holding up traffic for more than an hour, witnesses said.