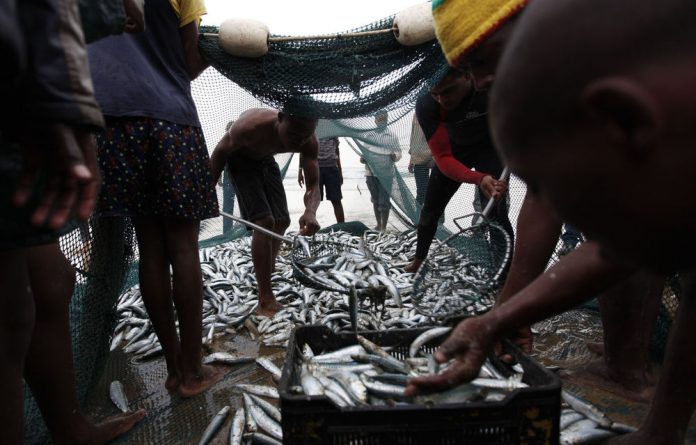 This year’s sardine run was much later than usual. In the past 10 years, with one exception, the sardines have started to amass off the South Coast in June before swimming north. In exceptional years, they reach Durban.

By mid-July this year, newspaper headlines were crying, “Where are the sardines?” The waves finally turned silver with fish off Umhlanga on July 21. Roadside vendors flogged crates of the little fish for R300 (the price had dropped from R500 at the hesitant start of the run). The bounty continued into the first weeks of August up to Ballito Bay.

The sardine run is an underwater version of the wildebeest migration over the Serengeti. It attracts not only hundreds of whales, thousands of sharks, tens of thousands of dolphins and a hundred thousand sea birds, it is also good bait for tourists. There are several festivals centred in Port Edward and Margate beach.

The annual feast brings watchers of birds and whales. Spotter planes track the giant shoal, which can be a staggering 7km long, and direct avid scuba divers to where they can see a feeding frenzy of predators, among them the Bryde’s (after a Norwegian surname pronounced broo-dah) whale, bottlenosed dolphins, copper and hammerhead sharks.

Our local sardine (Sardinops sagax ocellata) populations rise and fall dramatically, by the billions, owing to a host of little understood environmental factors.
Monterey, California, the underclass setting for John Steinbeck’s novel, Cannery Row, went from three-million cases of cans to next to nothing by the 1950s. The abundant Celtic sardines off Brittany suddenly disappeared in the 1960s.

Most of these little fish (the sexually mature bigger ones are called pilchards) are beheaded and canned in brine, tomato sauce or vegetable oil. Olive oil is best, and some people swear the sardines mature in the can and should be left in a cupboard for three years.

Lucky Star (in the flat ring-pull can) and Saldanha (in small cylindrical cans) are two popular brands of South African sardines. We also import a lot. John West offers Scottish sild sardines, and their regular sardines are products of Morocco or Portugal. The Cape Point brand is actually from Morocco. King Oscar oak-smoked sardines are packed in Poland. Woolworth’s brisling sardines (called sprats) are also packed in Poland and fished in the North Sea and the fjords of Norway.

To my taste, the best of the canned are the tiny brisling with lots of pepper on a buttered, lightly toasted baguette. But nothing compares to fresh ­sardines.
Increasingly, restaurants are advertising themselves as “sustainable seafood” establishments, but you can eat sardines in good conscience anywhere, scientists tell us. That is, if you can find them on the menu.

The upmarket Bahia at the V&A Waterfront used to do stunning sardines years ago, but have dropped the dish. Mariner’s Wharf doesn’t bother with sardines any more either. Your best chance will be at those restaurants that offer a variety of fish for their catch of the day, such as the Cape Town Fish Market.

The day I called around, I found only one place with fresh sardines, the Codfather in Camps Bay. Among the first to offer sushi on a conveyor belt, this casual eatery was unusual in its day for Cape Town.

At a deli-style counter, laid out on crushed iced, was fresh fish — yellowtail, butterfish, kingklip, kabeljou, sole. You order by weight, as many species as you like. You have to ask if you want to know the price, something that puts many locals off, and has tourists spending far more than they expect.

I ordered 100g of calamari (R36,30) and two glistening sardines (R37,72). The manner of their display made them look like decoration for the other fish. The waiter hid his disappointment well, but it was as though I had ordered the plastic lobster. They still had healthy staring eyes.

Sardines go bad quickly; apparently, it’s the downside to their being so rich in omega-3 fatty acids. I’ve had rancid ones in a pricey restaurant that subsequently went bankrupt.

My table at the Codfather, shaded by a loquat tree in bud growing outside, had a glimpse of the sea and the windows opened to the air. Rap music played in the background. Four sauces arrived in glass rame­kins: garlic butter, apricot, lemon butter and a lethal chilli sauce.

The fish is gutted and cooked whole (as it should be) and served in an oblong cast-iron skillet. I start by slicing the head open from underneath. The gill filaments tumble out and release a smell of the sea I find appetising.

Some people eat the unpleasantly bitter, black, pulpy meat inside. The backbone is easily removed with the main skeleton. You don’t have to be too careful about this; most people can eat the bones safely, but always have some fresh bread on hand to help down the occasional stubborn one, though even these are less trouble than a popcorn husk.

Sardines have always been with me, during my impecunious student days and even in my first poem in primary school, which I was required to illustrate, Spike Milligan’s wonderful nonsense verse:
A baby sardine saw her first submarine,/ She was scared and watched through a peephole./ “Oh come, come, come”, said the sardine’s mum,/ “It’s only a tin full of people”!