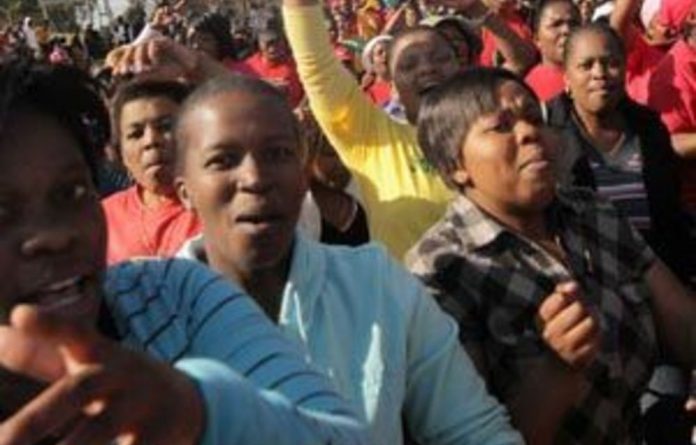 “Ministers agreed on a range of measures to be taken to ensure the safety of citizens and employees who are not part of the industrial action, as well as the growing number of volunteers who are stepping forward to deliver services,” Cwele said at a press briefing in Pretoria.

He was flanked by Minister of Health Aaron Motsoaledi, Minister of Public Administration Richard Baloyi, as well as Deputy Minister for Basic Education Enver Surty.

“Based on the way in which strikers have targeted various service-delivery sites, security agencies are being deployed countrywide as of today [Friday],” Cwele said.

Special courts would be set up to deal with “acts of hooliganism” and government would also seek an interdict against unions from accessing some departments and infrastructure.

Baloy said he was “surprised” by the degree of the level of violence of the strike. “This element of trampling on other people’s rights is not only surprising, but uncalled for.”

“If somebody gets into an operating theatre where somebody is being operated on and wants to disrupt somebody who is vulnerable, who is on life-support — in exercising certain democratic rights [to strike] you get in there and disrupt — that’s murder,” Motsoaledi told media in Pretoria.

“I’m not surprised but shocked, extremely shocked at the willingness to murder because you can’t have that kind of country.

“It shocks me that there is any living, normal South African who thinks like that,” said Motsoaledi.

Striking workers have barricaded public hospitals around the country and refused entry to ambulances and people seeking medical care.

“We have demonstrated our humanity during the World Cup. Why now are people losing their humanity and prepared to murder?” asked Motsoaledi.

Later on Friday Motsoaledi told journalists that he is volunteering his services as a doctor this weekend at Chris Hani Baragwanath Hospital in Soweto.

When asked what he would be doing at the hospital, he said he would be performing routine medical tasks.

“I won’t be brave enough to make a diagnosis, but I will assist where necessary. Maybe I’ll even be in theatre or performed a caesarean,” he said.

Condemnation
Meanwhile, the Gauteng provincial government was granted an interdict by the Labour Court on Friday to stop striking public servants from intimidating health workers.

“The court ordered government employees who are on strike to immediately refrain from intimidating, harassing or interfering with other employees and management from continuing with their work,” the office of premier Nomvula Mokonyane said in a statement.

The interdict also ordered workers to refrain from blocking entrances and exits to health and social development facilities in the province.

“This follows acts of intimidation at various public hospitals and schools,” said the statement.

While the government recognised the right to strike, it condemned “in the strongest possible terms” acts of violence and intimidation.

Right to strike does not entitle anyone to intimidate
Business Leadership South Africa (BLSA) on Friday said it was concerned about the public servants’ strike as reports of violence and intimidation escalated.

“Firstly, the right to strike does not entitle anyone to intimidate, threaten or assault other citizens. Nor does it entitle strikers to destroy property, blockade roads or in other ways obstruct public order,” it said in a statement.

“Union leaders need to urgently condemn this pattern of strike behaviour and take meaningful action against those acting in this way.”

BLSA said the country could not afford the labour action to continue.

“The cost to healthcare, education and other critical public services is simply too great.”

It called on government and union leaders to find recourse in a third party resolution through mediation, adjudication or arbitration.

“The largest local government union, Samwu, would like to send its unconditional solidarity and support to the ongoing strike by comrades of the public-sector unions,” said Samwu spokesperson Tahir Sema in a statement.

He urged the government to call an urgent meeting with unions and grant them their “reasonable and legitimate demands”. — Sapa