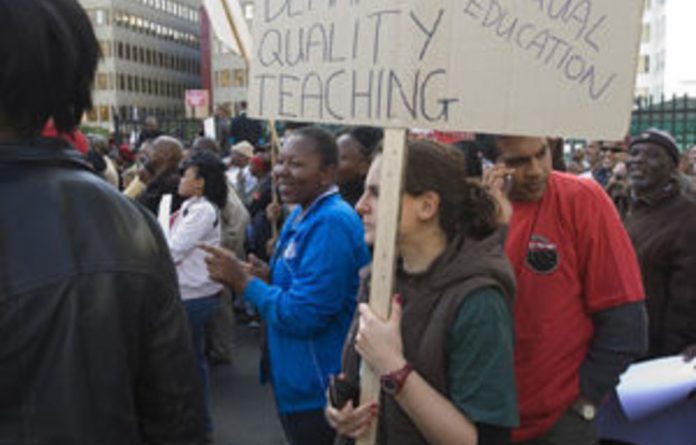 The three provinces have cited strike-related disruptions to schooling as reasons for the postponement of the exams, which were due to start next week.

But the national department is taking a different line. “The department has made it very clear since the strike started that the Grade 12 finals will not be moved under any circumstances,” Granville Whittle, spokesperson for the department, told M&G Education.

Gauteng, Free State and Eastern Cape announced on Wednesday that preliminary matric exams would be postponed due to the ongoing teacher strike.

The Western Cape, KwaZulu-Natal, Northern Cape, Mpumalanga and Limpopo education departments are expected to make decisions on the matter by the end of the week.

Knock-on effect
Provinces set preliminary matric exam timetables and papers individually, allowing them the freedom to vary the schedule. However, the final exams, including nationally standard dates, are set by the national department – and only it can vary these.

Whittle told M&G Education that the ripple effects of delaying the final matric exams would be multiple. “Any changes to the schedule will affect security and logistics and have a knock-on effect on higher education for next year and we can’t have that,” he said.

Whittle said the national department has taken steps to ensure that learners affected by the postponements will not be at a disadvantage when the finals get under way in October.

“Most provinces are setting up learning centres, with Grade 12s being bussed in daily, so we remain confident that the end of year exams will continue as scheduled,” he said.

Confusion dominates
But in at least one province – Gauteng – confusion dominated on Wednesday. Early-morning reports cited Gauteng education minister Barbara Creecy to the effect that prelims in the province were being postponed “indefinitely”.

M&G Education then asked the Gauteng department for clarity. This elicited a statement from the department that the prelims were being postponed in Gauteng “for two weeks”.

“The current strike conditions make it difficult to continue with the exams immediately,” the statement said. And when the strike ends “it will be necessary to twin exams with the catch-up programme”, the department said.

This means that prelim exams due to start on September 3 will be written two weeks later during afternoons while on the mornings of the same days “catch-up programmes take place”, the statement said.