Relief at voices of trapped miners 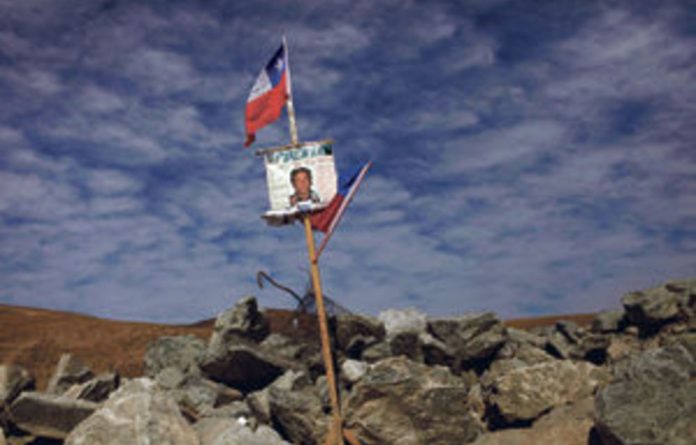 The words of Luis Urzua came over a crackling line, but were uttered with the professional calm of a man in control. “Shift foreman speaking.”

The 54-year-old has become the leader of 33 men trapped 670m underground in Chile’s San José mine for the past three weeks and, for a few dramatic moments late on Monday night, he was their interlocutor with the world. They are expected to remain deep underground in a chamber the size of a small apartment for a further four months before they can be rescued.

The audio contact was initiated by the country’s minister for mining, Laurence Golborne, who assured the trapped miners that a rescue team was working on their release, before asking the obvious question: “How are you?” “We’re good,” replied Urzua. “Waiting to be rescued.”

The foreman was drowned out as his trapped colleagues applauded, cheered and, in a spontaneous outburst that brought tears to the eyes of those on the surface, sang Chile’s national anthem, “Pure, Chile, is your blue sky”.

Golborne told the men that water was being sent in “doves”, the nickname for the 1.5m-long capsules being used to deliver supplies to the men through the single borehole that has penetrated the roof of their shelter.

Urzua interjected: “We haven’t eaten much lately, just the food in the shelter.” That was an understatement: under his strict regime, which includes work shifts and safety procedures, the men have survived almost three weeks on rations of just two small spoonfuls of tuna, a sip of milk and a biscuit every 48 hours.

Urzua worked for years as the coach of a local football club, an experience that psychologists now cite as key in his ability to lead and motivate the 33 miners. “We’re happily surprised because they are in much better shape than we could have hoped,” said Alberto Iturra, the lead psychologist on the rescue team. “We were expecting to find a much more distressed group, without the ability to reason, with slow reactions and limited hearing
and eyesight.”

The men have already been trapped underground longer than all but a few miners rescued in recent history. Last year three miners trapped in a flooded mine in southern China survived for 25 days and in 1983 two miners in northeastern China were rescued after 23 days. Few other rescues have taken more than two weeks.

Officials remain concerned about the mental health of the miners in the months to come and have discussed sending them antidepressants or allowing them to converse with psychologists to keep their spirits up. Rescue teams sent down oxygen after the miners suggested there was not enough air in the stretches of the mine beneath the collapsed main shaft.

They also plan to drop letters from family members and loved ones. “Can you imagine? After 30 years of marriage we will start sending each other love letters again,” said Lilianett Ramirez, whose 63-year-old husband, Mario Gomez, is among those trapped. “I want to tell him that I love him so much. I want to tell him that things will be different, that we’ll have a new life. I will wait as long as I need to see my husband again.”

Engineers have already worked to reinforce the borehole using a long hose to coat its walls with a metallic gel to decrease the risk of rockfalls blocking the passage through the unstable mine. The lubricant also makes it easier to deliver the capsules, the first of which held rehydration tablets and a high-energy glucose gel to help the miners’ digestive systems. It took an hour for the packages to reach the men.

The Chilean government faces enormous logistical challenges in drilling new boreholes to provide supplies to the men and, eventually, pull them out. Even getting the 33- tonne drilling rig to the site is laborious; on Monday night the truck delivering the badly needed drill rig broke down on the road. Chilean health officials are seeking advice from Nasa on how the 33 miners can remain sane and healthy while rescue efforts continue.

According to health ministry officials, conditions in the chamber are similar to those faced by submarine crews or astronauts on the international space station. Humour has not abandoned the men: asked what they needed, they listed canned peaches, toothbrushes and a chela — slang for a cold beer.

Golborne sought to keep up their spirits, informing them that “the whole country” had erupted in celebrations after contact was made. At one stage Urzua asked what had happened to a group of colleagues who were at the mouth of the mine at the time of the collapse on August 5. “We don’t know if they got out or not,” he said.

Golborne’s answer — hat there had not been a single fatality — prompted another round of excited cheers. The sound of cheering men was repeated again moments later when the miners were told that their relatives were staying on the surface of the mine in a makeshift residence named Camp Hope. —