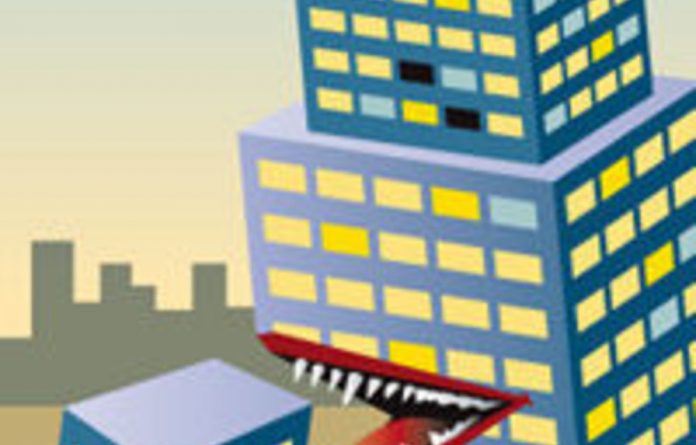 New “deals” valued at $8.2-billion were concluded in South Africa in the first half of 2010, with more in store as international corporations go on the hunt for African assets. South Africa’s 2010 merger and acquisition (M&A) numbers hinge on a handful of mega-deals.

“|We’re a small market, so one or two deals quickly throw the statistics completely out,” notes Mark Casey, partner: corporate finance specialising in M&A at Deloitte. The $8.2-billion mentioned above includes $2.7-billion for Gold Reef Resorts’ acquisition of Tsogo Sun Holdings (subject to gaming board and competition authority approval) and the $2.4-billion merger of Momentum Group and Metropolitan Life.

The second half will include the R24-billion deal between Dimension Data and Nippon of Japan, as well as BEE transactions at ArcelorMittal (R9.1-billion) and MTN (R8.1-billion). If it wasn’t for these transactions activity would be rather muted. Says Casey: ‘The conditions [in Africa and globally] aren’t yet conducive for M&A activity”. Investor sentiment, which typically reflects in deal-making, remains subdued on poor United States employment data and lagging sovereign debt fears.

Craig Brewer, Absa Capital’s co-head of M&A, says the sharp decline in activity in the second quarter is cause for concern. “If you look at the league tables — Thomsons, Reuters or our domestic indicator, Dealmakers — activity has improved year on year; but the second quarter was down quarter on quarter”.

‘African cross’ cities
M&A activity stuttered in April as excess volatility plagued global equity markets once more. Local companies face numerous challenges when they go on the acquisition path. The ripe prospects in the world’s dominant emerging markets — Brazil, Russia, India and China — have become expensive. “South African companies want to go over there, but it’s a bit expensive for them to do so,” observes Casey. The same value argument holds for South African assets.

“If you’re serious about Africa, you can’t ignore South Africa,” says Rod Macleod, head of corporate finance at investment banking and asset management firm, Imara. “But international investors aren’t going to chase assets which they believe are already fully valued.” Instead they’ll use one of the “African cross” cities (Cairo, Johannesburg, Nairobi and Lagos) to springboard their acquisition trail on the continent.

Brewer agrees: “These international companies want to acquire something here that either has operations in Africa, or has the ability to establish them.” A company in Europe or the US is generally familiar with South Africa’s jurisdiction, equity markets and banking infrastructure. That’s why large offshore conglomerates have their crosshairs drawn on local companies with solid track records in Africa.

Rumours doing the rounds include a large American retailer courting the likes of Shoprite Checkers or Massmart and an international bank looking closely at Nedbank. It would take an acquirer with substantial financial clout to close either of these deals. HSBC has since confirmed its interest in acquiring up to 70% of the bank.

Large multinational corporations using South Africa as a springboard into Africa will push local M&A activity higher in 2010/11. A second driving force will come from South African companies shifting focus to the north. Three years ago the average local corporate would have turned to opportunities in Australia, London or another developed market — today they’re jostling with the French and Chinese for the best opportunities in Africa.

Part of the reason for this shift is the no nonsense stance from the local competition authorities who are doing a sterling job to prevent concentration in key market segments. “If you want to dominate in other markets which offer even more growth, just go north of the border,” says Casey. Instead of seeking a mega-merger in the local pharmaceutical space Aspen Pharmacare went on the emerging market hunt in Australia, and Adcock Ingram completed a smaller transaction in Ghana.

“Even a mighty power like SAB Miller is completing small transactions in Africa — a bottled water company in Uganda or a small brewer elsewhere —” The era of the mega-deal is also on the wane. You cannot grow by acquisition forever as demonstrated by MTN, which finally threw in the towel on concluding a deal with a major emerging-market telecoms player.

After unsuccessful negotiations with Reliance, Bharti Airtel and Orascom the group finally rewarded shareholders with its maiden interim dividend — paying away about 40% of its half-year earnings. The company’s decision is sensible. Pursuit of an acquisition at any cost creates messy legal structures and inefficiencies — and signing the deal is usually only 5% of the job.

A leap of faith
Other factors sidelining large transactions include nervousness among corporate executives, limited access to finance and politics. “Company executives are out there in the public domain, under the floodlights, and don’t want to be proven wrong,” says Brewer, trying to explain why abundant and seemingly cheap companies remain on the proverbial takeover shelf.

Executives are scared to take a leap of faith with so much uncertainly on the global economic stage. Financing large transactions is also difficult. “When debt markets are slightly closed [raising finance] becomes increasingly hard and the cost of debt starts going up,” he says. The interest cost factor eats into 10-year returns. The use of equity to fund transactions has become taboo because of market volatility and the generally poor state of company balance sheets.

Shareholders don’t want to take up additional equity because they’re locked in for a period of months, at which point their investments could have suffered significant losses. As a result financing has become more creative. Absa Capital says the emergence of bank loan syndication has helped the M&A space over the past three to four years.

Banks can pour significant cash resources into an acquisition up front, and then “sell down” to minimise risk later. Recent “political” developments around mining rights involving the department of mineral resources and mining companies Kumba Iron Ore, ArcelorMittal and Lonmin could deflect international investment interest from South Africa to other African regimes.

The decision to interfere with mining exploration and property ownership rights is making investors increasingly skittish and South Africa risks backsliding to “just another Third-World emerging market” for investment purposes.

Looking to the future
Imara says there are a number of jurisdictions that are politically quite stable, even though they’re perceived as autocratic, including Zambia and Botswana. “If you invest in Botswana it’s really the limited scope for opportunities that will keep people out, rather than political concerns. Sierra Leone is regarded as less politically stable than Nigeria, but each suffers similar operational problems from a South African perspective,” says MacLeod.

His company is busy with some interesting transactions in Tanzania and Kenya. “There’s been great interest in African assets, particularly in the manufacturing and distribution of fast-moving consumer goods — body care products, toiletries and the likes — with intense interest from India and China,” he says. What will the future hold?

Brewer says: “We’ll see a slow recovery till the end of this year, but everything is coming into alignment for a much better 2011, though we won’t shoot the lights out.” The African M&A renaissance will be driven by opportunities in the telecoms, oil and gas and power and energy sectors. The occasional “chunky” deal will still take place, but there will be a number of transactions in the lower ranges of $50-million to $100-million in Africa.