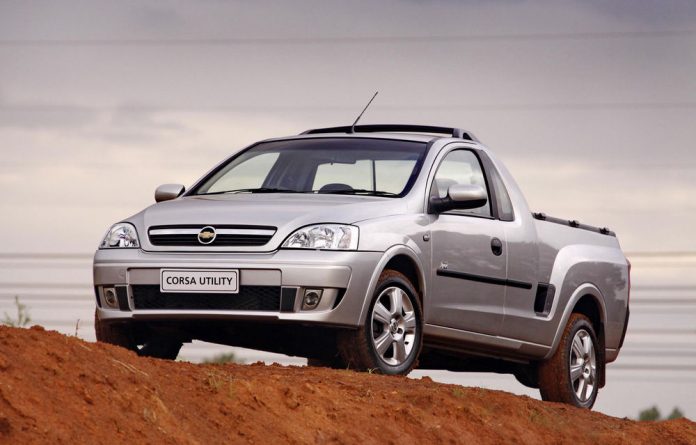 Something is a class leader because it’s cheap, offers value for money, reliability, low running costs and good resale value. In fact, you might be mistaken for thinking that the more unremarkable a car is, the better it’ll do at the box office. Think Polo Vivo and Toyota Corolla, and you’re halfway there. However, things make a refreshing handbrake turn when you get to the Chevy Corsa Utility.

First things first, the Corsa Utility has moved from Opel to the Chevrolet badge. No biggy— Daewoo successfully changed all their product nameplates to Chevrolet not so long ago and no one really noticed. The Corsa Utility is still made at GM’s Struandale factory in Port Elizabeth to the same exacting standards.

So what’s the reason for this name change? The answer from General Motors head of marketing goes along the lines of “— a global repositioning of the brand”. Right, no explanation there then, but all you need to know is the Chevy bowtie is nailed on the Corsa Utility, while the Corsa hatchback is still an Opel.

Unlike Daewoo however, the Corsa Utility is a hugely significant seller in South Africa. Since the model’s introduction in 2004 it has been the light commercial vehicle (LCV) sales leader for a miraculous 64 consecutive months, storming to an unassailable market share in that segment of 45% over six years. One takes for granted that Chevrolet only reintroduced themselves to South Africa that same year and thanks to solid sales, and the vastness of GMSA’s dealer network, it felt as if it never left. Don’t think, however, that because of corporate meddling, GMSA is resting on its laurels, resorting to making a cut-price bakkie to keep the accountants happy.

The Chevy Corsa Utility 1.4-litre Sport, which I’ve been testing, has been a total revelation. I can’t think of any first-time car or bakkie buyer who would want anything more than this vehicle has to offer. The 1,4-litre Sport is priced at R155 400, which is quite a lot more than the same engine and same powered R107 600 1.4-litre Base model. But it’s all the trinkets that turn the workhorse into an acceptable proposition. Height-adjustable seat, two airbags, fog lamps, rear sliding window, alarm and central locking and alloy wheels are all standard, however, you get none of these on the 1.4-litre Base.

More important than what you get, is the quality of everything you get. All the switchgear is immaculately made and seamless to operate with no sharp edges or crunching plastic. The dials and CD/stereo are not only acceptable for a bakkie, but impressive for any small vehicle. It’s no surprise to me at all that Synovate has voted the Corsa Utility the best LCV for five years running and its Struandale plant as the highest quality LCV production line in South Africa. It has a class-leading payload of 680kg (in 1.4-litre petrol models) and over a 72-hour speed and endurance test this year, the Corsa Utility 1.7-litre diesel model broke a total of 15 local and international records in its class. It’s also no surprise to me then that GMSA say many Corsa Utility bakkies are bought by first-time buyers as an entry-level car, not as an LCV.

The drive is seriously good. You may blend into the crowd in a Corsa Utility, but, at least, you’ll feel a million bucks as you buzz around town with the Sport’s 66kW and 113Nm. That doesn’t sound like much, but the steering is weighty, the throttle and clutch response is crisp and the gearbox feels good too. I had an absolute blast in the humble, little Chevy Corsa Utility and I can now see why so many take to pimping out their bakkies as it’s a bakkie you can revel in driving every day.

My only misgiving — and this is the shortest list of dislikes I can remember post road test in a long time — is the plastic load-bay cover that made one hell of a racket over 120kph. Aside from that vibration, I couldn’t find much else wrong with the Corsa Utility Sport.

That’s only the second car to make it onto my “recommend to anyone” list. The other is proudly South African and also comes from the Eastern Cape, the new VW Polo.