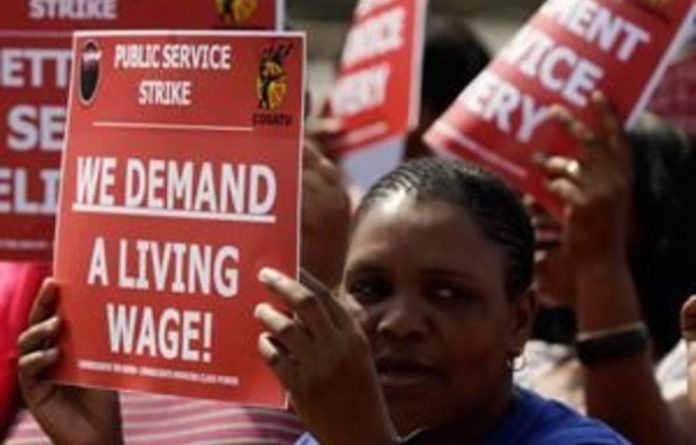 The Congress of South African Trade Unions (Cosatu) has suspended its planned solidarity strike to give unions representing public servants time to consult members on the government’s latest pay offer, it said on Wednesday.

“The federation would, however, stress that this is only a suspension and our affiliated unions remain ready to take solidarity strike action in support of the public-service workers if a resolution to the dispute is not reached,” Cosatu said in a statement.

The government has amended its offer to a 7,5% salary increase and R800 monthly housing allowance from the rejected 7% and R700.

The unions have demanded an 8,6% increase and R1 000 monthly housing allowance.

Some union members have been at their posts to avoid having pay docked for days off work. Those who have not been working have led to severe staff shortages at hospitals and at many schools.

According to Cosatu’s website, it has about 1,8-million paid-up members in various sectors including mining, communication and municipal services.

‘At this stage it is 50/50’
Meanwhile, Cosatu and the Independent Labour Caucus (ILC) will meet later on Wednesday afternoon to consolidate members’ mandates on whether to continue the public-sector strike or to accept government’s latest wage offer.

“At this stage it is 50/50. There is no clear indication,” ILC chairperson Chris Klopper said.

Nkosana Dolopi, deputy general secretary of the South African Democratic Teachers’ Union (Sadtu), which has been among the most vocal unions, did not want to discuss the feedback they had received until after the meeting.

“We will first submit that report to that meeting,” Dolopi said.

Klopper said a settlement was not restricted to whether members would accept the 7,5% and R800 housing allowance offered, but that there were some other “deal-breakers” contained in the six-page document they were asked to consider.

This included agreement on what they believed was discrimination in the housing allowance, which was based on marital status, equalisation of the medical subsidy, and whether people who were on strike would face disciplinary measures when they returned to work. — Sapa