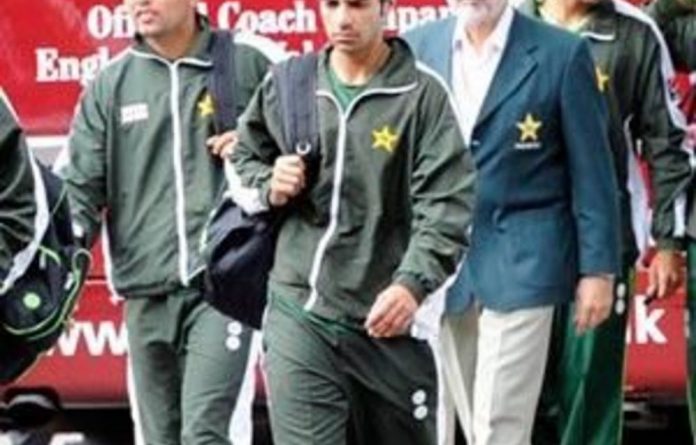 Three Pakistan players embroiled in betting-scam allegations headed to London on Wednesday to face questioning that is almost certain to sideline them from the team’s tour of England.

Test captain Salman Butt plus bowlers Mohammad Aamer and Mohammad Asif look set to miss Pakistan’s match with county side Somerset in Taunton on Thursday, a warm-up match before their limited overs internationals against England.

The trio, all casually dressed, left the team hotel in Taunton at 11:12am accompanied by team security officer Major Khawaja Najam, flanked by private security guards and police officers.

Butt shook his head when asked by a reporter if he was “guilty”.

The trio were due to face questions from Pakistan Cricket Board (PCB) chairperson Ijaz Butt and Wajid Shamsul Hasan, Pakistan’s high commissioner to Britain, in London on Thursday.

“The boys are leaving today [Wednesday]. They will have a meeting at the High Commission tomorrow [Thursday],” Pakistan team manager Yawar Saeed had earlier told reporters.

It appears increasingly likely the trio will play no further part in the tour amid mounting calls for the trio to be barred from appearing while the probe into the allegations is ongoing.

The International Cricket Council (ICC) has promised “prompt and decisive action” if the “spot-fixing” allegations linked to betting rings made by Britain’s biggest-selling newspaper are proven.

Its chief executive, Haroon Lorgat, hopes there will be “some sort of conclusion” to the probe within the next few days.

“The England players understand it is important the games go ahead and they will be professional but they would or will find it really difficult to play against the guys directly implicated,” Porter told the Daily Telegraph.

Customs officials in Britain, meanwhile, said they had arrested and bailed two men and a woman “as part of an ongoing investigation into money-laundering”. A source confirmed the arrests were linked to the cricket scandal.

Meanwhile, the ramifications of the affair were being felt far beyond the world of cricket, with Asif dropped from a planned role in a film, Indian media reported on Wednesday.

The bowler had been slated to play the lead role in the Malayalam-language film Mazhavillinattamvare (Till The Tip Of The Rainbow), which charts the life of a Pakistani cricket coach in the southern Indian state of Kerala.

The furore erupted on Sunday when The News of the World alleged Mazhar Majeed, a 35-year-old agent for several Pakistan players, took £150 000 to arrange for deliberate no-balls to be bowled at precise points in last week’s Test match against England.

The information would be of enormous value to the spot-betting industry, where money is wagered on specific incidents in matches.

Majeed was arrested on suspicion of conspiracy to defraud bookmakers in the wake of the allegations, but was released on bail without charge on Sunday, to return at a later date.

Detectives interviewed Butt, Asif and 18-year-old prodigy Aamer, who delivered the no-balls — normally an accidental and unpredictable occurrence — and police seized their cellphones.

Shock and dismay
The world of cricket has reacted with shock and dismay to claims that huge sums of money had changed hands in alleged fixing schemes at international level, linked to shadowy betting rings.

Investigators from the ICC’s anti-corruption and security unit are in Britain looking into the allegations.

Meanwhile in Australia, it has emerged that cricket stars were targeted by a suspected illegal bookmaker.

Brett Lee and Mitchell Johnson were targeted by the unnamed figure who approached two teammates in England last year, reports said on Wednesday.

The Sydney Morning Herald and Daily Telegraph said Lee and Johnson were confronted in the team hotel’s bar during the tour of England, fuelling fears over illegal betting after a newspaper sting snared an alleged match-fixer. — AFP