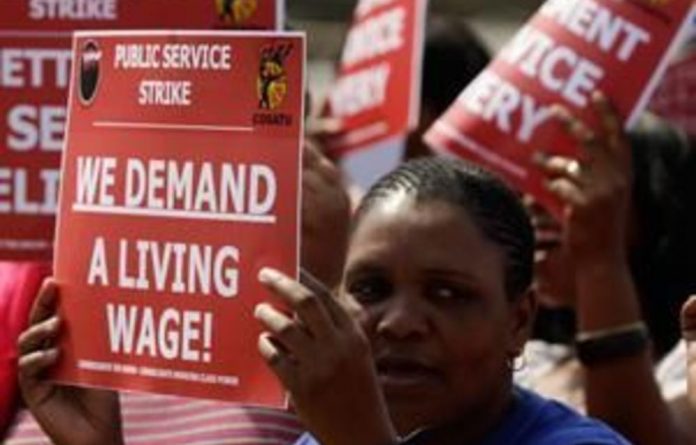 “We got a report from unions and the overwhelming majority of provincial structures have rejected the government’s offer, the strike continues,” Congress of South African Trade Unions (Cosatu) general secretary Zwelinzima Vavi said.

However, the Independent Labour Caucus (ILC), one of the labour umbrellas representing about 1,3-million workers, was still divided on the offer.

Chris Klopper, chairperson of the ILC, said his organisation was “still in the process of collecting feedback from its members on the government’s wage offer”.

“We’re not in a position at this stage to pronounce our stance. At this stage it’s a 50-50 … we will know by Friday what the stance is,” said Klopper.

Unions tabled the improved offer to their members after President Jacob Zuma ordered his ministers to negotiate a solution to the 15-day stoppage that has paralysed schools and hospitals.

“Unions will meet tomorrow morning [Thursday] to further discuss and assess where we are,” said Vavi.

The government revised its offer to a 7,5% wage increase and an R800 housing allowance, up from its previous offer of a 7% raise and R700 for housing.

Unions are demanding an 8,6% increase and a R1 000 housing allowance.

No surprise
Cosatu’s stance did not come as a surprise as earlier on Wednesday one of the biggest striking unions said it had refused the latest proposal.

“We have rejected the offer,” said Sizwe Pamla, spokesperson for the National Education Health and Allied Workers, Union (Nehawu), which has about 244 000 members.

Zuma’s order to break the deadlock came amid mounting pressure over the walk-out, which is now in its third week, as wage disputes spread to the private auto sector and forced an indefinite shutdown at a Volkswagen plant.

But the revised public-sector offer saw sympathy strikes planned for Thursday, including at the country’s mines, called off to give civil servants time to vote on the new deal.

“The NUM would like to emphasise that this is a suspension and as such should a resolution not be found, the NUM reserves its right to strike,” said the 320 000-strong National Union of Mineworkers.

Cosatu, which lists about two million members, had called for the solidarity strikes, which it suspended on Wednesday.

However, it also warned that future stoppages were possible.

“The federation would, however, stress that this is only a suspension and our affiliated unions remain ready to take solidarity strike action in support of the public-service workers if a resolution to the dispute is not reached.” — AFP