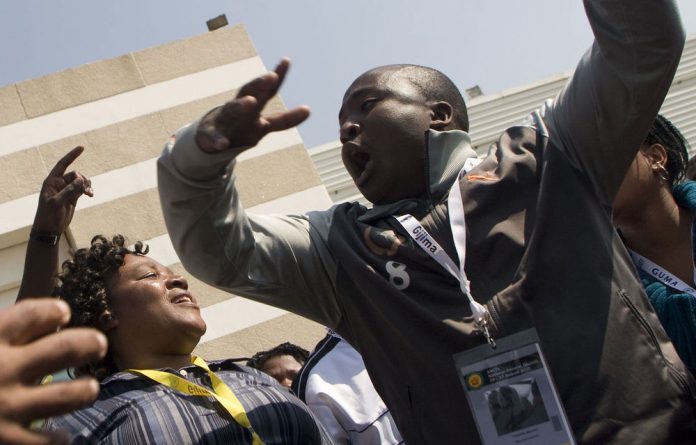 After his humiliation at the ANC Youth League’s national general council last week, the league’s deputy president, Andile Lungisa, is hoping to stage a comeback with the support of senior ANC leaders who have run out of patience with league president Julius Malema’s perceived ill treatment of his detractors.

Lungisa’s backers plan to fight back at the ANC’s national general council (NGC) by engineering the censure of Malema, his national executive committee and ANC national chairperson Baleka Mbete, who attended the league’s NGC last week.

They will even go as far as proposing a motion of no confidence in the league’s national executive committee and Mbete.

At last week’s NGC a motion of no confidence in Lungisa was tabled, but it was not voted on. The intention was to remove him from his position as deputy president.

His supporters are also seeking to settle scores after he was ordered to apologise to NGC delegates for allegedly using the National Youth Development Agency (NYDA) to promote himself in the league’s factional battles.

Though he hasn’t publicly admitted to having leadership ambitions, Lungisa is known to aspire to ascend to the throne of the Youth League at next year’s elective conference.

Those close to him would like to see the ANC NGC discipline Malema’s national executive committee because of “divisive behaviour”, saying that the leadership sang songs supportive of Deputy Police Minister Fikile Mbalula as the ANC’s next secretary general in 2012.

“The succession race has not formally opened. How can they be singing about who they want in 2012?” asked a Lungisa lobbyist.

Mbalula will not be spared in this campaign. Said an Eastern Cape youth leader sympathetic to Lungisa: “We will say the person who is putting the ANC at risk is Fikile Mbalula, because of his ambition to be the secretary general.”

He was hopeful of success at the ANC NGC, where “there will be many people among the delegates who are sober, who are not rented”.

Lungisa and his supporters are convinced that the league’s national executive has excluded delegates from last week’s NGC to ensure minimal dissent at the conference.

“At the ANC’s NGC we will have the support of the majority. These older people are tired of Malema and his tricks,” a Lungisa sympathiser said.

He pointed out that Malema had been charged with divisive behaviour before, when he was hauled before the ANC’s internal disciplinary ­committee earlier this year.

Supporters of Lungisa who were delegates at last week’s NGC told the Mail & Guardian that they had recorded video footage of the league’s leaders participating in songs and slogans praising Mbalula.

The M&G learned from a source close to Lungisa and another lobbying for Mbalula that ANC MP and Youth League national executive committee member Mduduzi Manana had been earmarked to take over from Lungisa as deputy president if the motion of no confidence had succeeded.

Manana would then formally stand for the position next year, lending support to the Malema faction’s aim of blocking Lungisa’s possible re-election.

A Youth League Limpopo regional leader sympathetic to Lungisa, who asked not to be named, said the plan to remove the deputy president was derailed by senior ANC leaders who called Malema as soon as they heard about it. “Malema was advised that if he removed Lungisa at the first NGC of the Youth League, the gathering would go down in history as chaotic,” said the Limpopo leader.

An Eastern Cape leader said: “Most of the senior leaders were angry, including Kgalema [Motlanthe]. Some called several Youth League NEC members to ask: ‘Can you sustain what you’re doing?'”

An Mbalula lobbyist with close ties to the Youth League confirmed the intervention by some senior ANC leaders, including Mbalula himself, who called Malema.

Some of Lungisa’s sympathisers are sceptical about his fight-back plan. An ANC Youth League and Young Communist League leader said Lungisa might eventually be removed as deputy president, regardless of whether he toed the line, because he differed with the current national executive committee on its 2012 leadership plans.

The Youth League’s national executive committee wants Mbalula to replace ANC secretary general Gwede Mantashe and is non-committal about whether it will support Jacob Zuma for a second term as president. Lungisa and his supporters want Mantashe and Zuma to retain their positions.

“Who is supporting Lungisa? Are they influential?” asked the communist leader. “If he had support, Buti Manamela [Young Communist League national secretary] would not have been booed during the session Lungisa was chairing.”

A lobbyist for Mbalula, with close ties to the Youth League, said the nightmare was not over yet for Lungisa. Also facing trouble was Youth League deputy secretary general Steven Ngobeni, who doubles as Lungisa’s chief executive at the NYDA.

Even if the league removes Lungisa as deputy president, he is likely to retain his position as NYDA ­chairperson. Said the Eastern Cape Lungisa supporter: “Andile is appointed by the president at the NYDA. The ANC Youth League does not deploy anyone, so they cannot recall him.”

The Young Communist League leader sympathetic to Lungisa said the current developments in the ANC Youth League reflect the manner in which Malema was elected to the position of president.

The Mangaung conference that elected him was marred by violence and intimidation and had to be reconvened at Nasrec in Johannesburg.