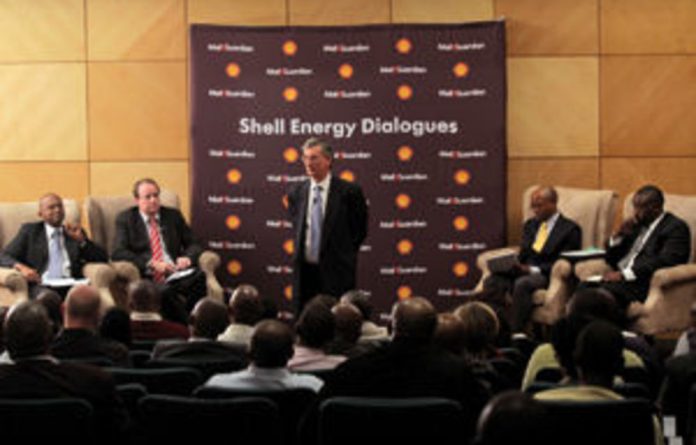 The Mail & Guardian, in association with Shell, introduced the first session of the Shell dialogues series held in mid-August to debate with leading industry and government officials whether it is wiser for South Africa to invest in new refinery capacity or simply import already refined fuels from abroad. We bring you some of the opinions offered by delegates at the session

Rod Crompton, National Energy Regulator of South Africa
One of the global issues that [the Shell debate] brought to our attention last year is that the era of cheap oil is over. They tell us: no more cheap oil; that era we’ve lived through and it’s past now. There’s a linked thought which is talked about a lot in some newspapers and journals: the concept of peak oil. [It says] that the oil supply in the world follows the shape of a bell curve, and that we’ve been up the steep side and over the top and we’re going down the other side. That’s what the sort of peak oil argument is, that we’ve already exploited more than half of all the oil that there is to be exploited in the world. This introduces the whole security of supply debate, which a lot of governments have got very active about in recent times.

Nhlanhla Gumede, independent consultant, Khanya Energy
The issue with peak oil is that — the era of this resource being cheap [is over]. It’s god given and it’s finite. Now, if we are an economy that does not have that particular resource why do you want to develop an economic structure on the basis of something that you don’t have? The peak oil debate should really impact those people who are copycats. You can’t copy economic growth. Each country has its own core competences. Each needs to build on the basis of its own competences, core competences. And if we will be a copycat and import other people’s raw materials or core competences into our own country and build on that, we’re exposing our people. It’s not sustainable.

Bonang Mohale, country chair, Shell SA
When you look at the price and the movement of oil prices, especially per barrel, it has really been volatile — between $30 and a peak of $147. Of course, when that happens it requires a different strategic response by oil companies but also by countries. But a number of things drive the oil price. First of all, 72% of the proven world reserves happen to be in the Middle East. That’s why the United States is now looking at what we call “heavy oil”, where we need more technology, we need to take more risks. We are deep water drilling, mostly off the Gulf of Mexico, and I think what happened on April 20 2010 [with] the Deepwater Horizon was sad, regrettable and unfortunate, but I think it is going to live with us because the US alone consumes in the order of 30-million barrels of crude per annum. It is only for the first time in the history of the world, on October 20 last year, that China became a bigger net consumer of energy than the US.

I think what drives the Royal Dutch Shell strategy is very simple. We are looking at more upstream and more profitable downstream, that is very clear. And in downstream we are really basing our strategy on three things: on operational efficiency, of course, but also wanting to concentrate our footprints on those markets where we can win and are going for
selective growth. So when you put those two strategies together in simple English … it says we want to be in fewer larger markets. We took a strategic decision that is not anti anything, to sell our downstream businesses in Latin America and to sell refineries in Greece, in the United Kingdom, etcetera, because we know that in the next 30 years we want to deepen and widen our investment in exploration and production. So in South Africa, for the first time in a hundred years, [we have] been awarded not one but two licences.

The first one is [in] the Karoo, we’ll be exploring for shale gas, in the Canadian sense, where we’ll be spending in the order of $6-million a day in drilling a few holes. And then the last one, of course, is off the coast, which is really off shore, the Orange River basin … again to see what is available. Once we find that I think we’ll be working hand in glove with government to realise [the] issues of [an] energy security master plan, security of supply of clean fuels, but also we can then beneficiate and create jobs.

Tseliso Maqubela, deputy director general, energy planning, department of energy
The issue of the balance of payments, we have no doubts about that. That is an issue we are confronted with in discussions, informally and formally, with our colleagues from the national treasury. The imports that are increasing of product have an impact on that and this is something that we have to manage but it is also true that when you import crude oil you basically have an impact, although not as much, on the balance of payment. The step taken by Shell to look into our shores is an encouraging one, I can say that, but also we believe there is a considerable amount of hydrocarbon potential in South Africa.

Rod Crompton
In this sector in this country we have a unique technology of coal to liquids … that was started in the first coal-to-liquids refinery in 1954. It talks to Nhlanhla’s point about comparative advantage; what is the country’s comparative advantage? Coal was seized on in that case, technologies were developed and, yes, a lot of public funds helped to develop that. Now we have a technology which, at some point along the line, was privatised — although PetroSA is still using part of that technology, which is gas-to-liquids — but that investment in refining and importing also yielded another technology, it wasn’t of commercial viability anywhere else in the world. So one of the things we need to think about is these long-term schemes: are they realistic today?

Nhlanhla Gumede
I’m sceptical about just refining for refining’s sake, just remember that as long as the driver is not insurance, if you’re going to be making any investment in any country for insurance, that I’ve got a problem with. But if our investment is about saying how are we going to have the 25% of the people in South Africa that are unemployed. If that’s the question we are asking ourselves, and the refinery itself actually employs about 400 people at best, it’s not the employer. Not just on the feedstock side but on the downstream side, therefore, I would say, if we are going to refine in South Africa, let’s have a coal to liquid, let’s find ways of handling all the issues around it, that’s what God gave us, coal. We don’t have much water, we are not much of a country in terms of water, therefore biofuels in South Africa are a dream, if we are honest with ourselves. We have coal; we’ve got to look at that.

Jorn Falbe
The downstream beneficiation potential from a world-class crude oil refinery is there. At the moment our crude oil refineries are not that competitive. You will never find a downstream investor in this because you have no base, no source refinery to secure you that you are staying there for the next 20 years and if you do downstream investment you need the security. And these exports, which are what we have discussed, are an opportunity to connect with neighbouring countries and offer them something. When you look at Angola … 70% of their product is there, so they also developing their own refineries, they are also looking at other opportunities.

Tseliso Maqubela
I fully agree that a regional approach is the way to go and I’m also going to talk about some of the visits, outgoing visits, of our head of state. I think if you look at them they have been aimed at actually achieving that. There was a visit to Angola, there was a visit to Mozambique … he was in Namibia, so I think the approach is that of actually trying to forge those regional links as much as possible. A lot was discussed in Angola and it was reported in the media. We have an incoming visit next month from the president of Angola that should give an indication as well of the kind of relations we have. The countries that we’ve been to should also give people an indication of what we are about.