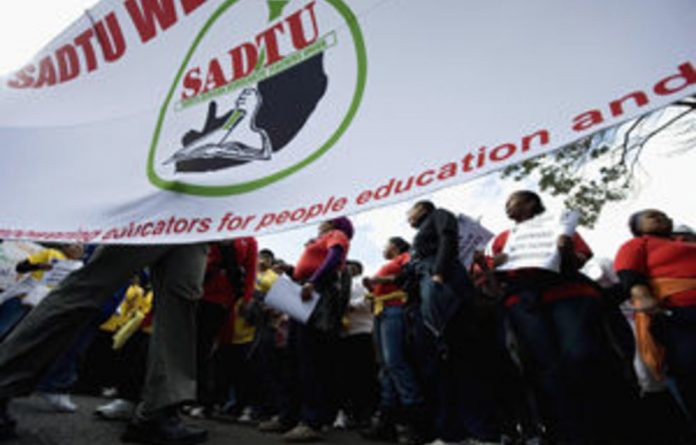 ‘Little union lords” are running the South African Democratic Teachers Union (Sadtu), having long ago defeated the education idealists who were central to the union’s formation 20 years ago.

So said former trade unionist Sakhela Buhlungu, now professor of sociology at the University of Johannesburg (UJ). He reminded the Mail & Guardian this month of the demands teachers made when they went on their first strike in 1989: “The employment of more teachers; the reinstatement of teachers who had previously been dismissed; a reduction in the amount of teaching periods; a salary increase of R500 across the board.”

More than 6 000 teachers joined that strike, the year before Sadtu’s formation in 1990.

Now, with its 20th birthday celebration due next month, Sadtu has grown into a muscle-bound adult. Its 245 000 members make it the largest union in the public sector.

Its torso has grown, but its demands have narrowed.

As Buhlungu put it: “We want our 8,6% salaries and R1 000 housing allowance.” Where strikers in 1989 wanted more teachers to open the doors of learning to all, protesters in 2010 use education quality as a threat. A recent placard promised: “You give us a 7% increase, we give you 7% pass rate.”

The intimidation and vandalism marking the 2010 strikes would have been foreign to 1989 education idealists. Twenty years ago teachers were rather conservative professionals, regarded as elites in their communities, Buhlungu said.

Sadtu president Thobile Ntola reminded the M&G that teachers initially did not want to affiliate to trade union federation Cosatu because they considered themselves professionals.

But “the idealists have fallen by the wayside and the ‘little union lords’ are running the show,” Buhlungu said. Now teachers who want to work run for dear life when strikers approach their schools and many parents have kept their children at home for fear of violence by striking teachers.

Buhlungu is the author of Trade Unions and Democracy, a recently published study of the rise of trade unions in the 1970s, which argues that they have lost integrity steadily since then.

Sadtu has also undergone transformation, he said. At its birth, it was informed by the call of the Freedom Charter: “The doors of learning and culture shall be opened!” It was why the union could not easily sell the idea of a strike to its members.

But long-time Sadtu spokesperson Jon Lewis said the union’s militancy is not a recent development. “Our average member is about 40 years old and this means these are the people who were students during the 1980s, so their militancy is not something new,” he said.

The union has just got bigger, he said. “When Sadtu was founded in 1990 it had 30 000 signed members and now it has a quarter of a million. This means it is the fastest-growing union over this period.”

Salim Vally, a former trade unionist and now senior researcher in the Centre for Education Rights and Transformation at UJ, said the introduction of outcomes-based education (OBE) did not help teachers. “It deepened insecurity because it was imposed and took away the autonomy of teachers.”

Party political alignments have brought further complications: “Initially, there was a honeymoon period between the union and government, but this transformed into supporting one or other faction in the ANC,” Vally said.

Unions need to adopt a new approach when negotiating and bargaining with their employer, Buhlungu said. “Unfortunately the siyayinyova [daredevil] mentality is deeply entrenched in the minds of many South Africans and bold action to stop this needs to be taken by our leaders,” he said.

Sympathy and support for strikers will come only when society sees placards pleading for support and not the images of intolerance prevalent in this strike. “Our teachers have not only adopted these methods of striking, they have actually embraced them,” said Buhlungu.

Militancy in teaching
“Sadly, Sadtu does not go on rooftops advocating better working conditions and speaking against pregnancies of children by teachers,” Buhlungu said. “Instead, it protects these teachers.” He conceded that teachers’ work conditions, including their salaries, have progressively worsened and this has fuelled the current militancy.

And union members’ militancy also has to do with the context of the time, Vally said. “Many of the members see that not much has changed post-Polokwane. All they see is blatant forms of corruption.”

But we need strong teacher bodies, he said. “It is a positive thing that we have a teacher union that can contribute to the transformed curriculum of this country and that can build the poor, and a union that can encourage teachers to enhance public education.”

Sadtu leadership
Buhlungu said Sadtu’s leaders are silent because a few “regional union lords” have held them hostage. He said they are afraid to speak out against those who go against Sadtu policy because they may not be voted into positions of power.

“All people care about these days is jostling for position and their careers and they cover up for one another,” he said.

But Ntola said Sadtu leaders strongly reprimanded some strikers for their behaviour and militancy is not encouraged in the union.

“The teachers are angry because they are not being treated as professionals and their anger is justified,” he said.

Sadtu will continue to be a radical and revolutionary union that leads the profession of teaching and emphasises quality education.

Teacher development has not improved since 1994, Ntola said.

“We want to be central in education, not only basic education, but everything that has to do with education.”