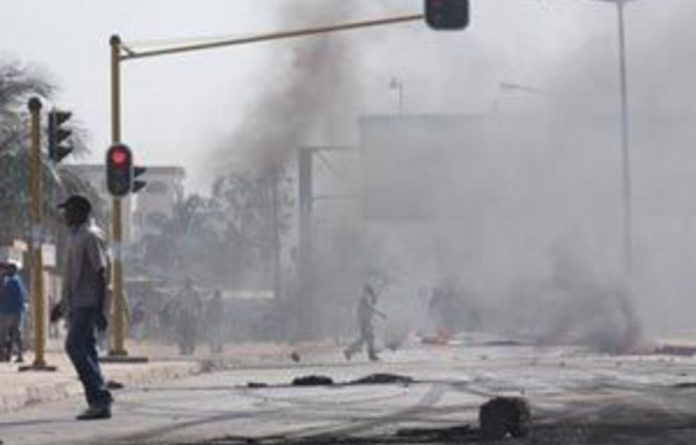 Mozambican police on Monday deployed across impoverished neighbourhoods in the capital, Maputo, to prevent fresh protests over food prices, after 13 people died in three days of rioting last week.

Over the weekend, text messages circulated through the city to urge Mozambicans to return to the streets on Monday, prompting police to fan out through Maputo as businesses cautiously opened their doors.

Police patrolled the city centre, while trucks transported officers to outlying areas that saw some of the worst violence last week.

“We did not have any incidents over the weekend, but there are rumours that people will return to the streets on Monday to continue rioting,” Maputo police spokesperson Arnaldo Chefo said.

“Now we have deployed all our forces on the ground so that we can get the situation under control as soon as possible. But right now we have no sign or suggestion that it will erupt again,” said Chefo.

On Wednesday riots erupted around Maputo as people blocked roads with burning tyres in protest at high fuel and food prices.

Rioting spread to several towns in central parts of the country, resulting is deadly clashes with the police, with 159 people arrested and about 450 injured.

The demonstrations last week were sparked by text messages calling on the public to protest a new increase in bread prices.

Many poor Mozambicans rely on their own small crops for food, a resource that the urban poor can’t fall back on. The bread price hike came on top of recent jumps in the cost of water, electricity and fuel.

“If the police had not been present, there would have been more deaths,” national police spokesperson Pedro Cossa told a press conference.

The violence was the worst in Mozambique since 2008, when six people were killed in protests against a public transport fare increase.

Despite impressive economic growth since the end of a 16-year civil war in 1992, Mozambique still has a per capita income of just $794 a year.

The country relies on neighbouring South Africa for many goods, while a large number of Mozambicans work in South African mines.

The country’s dependence on South African products has helped fuel the rising prices. The South African rand has appreciated 43% against the Mozambican metical since this time last year, making the imports more expensive. — AFP