Low wages may close down plants 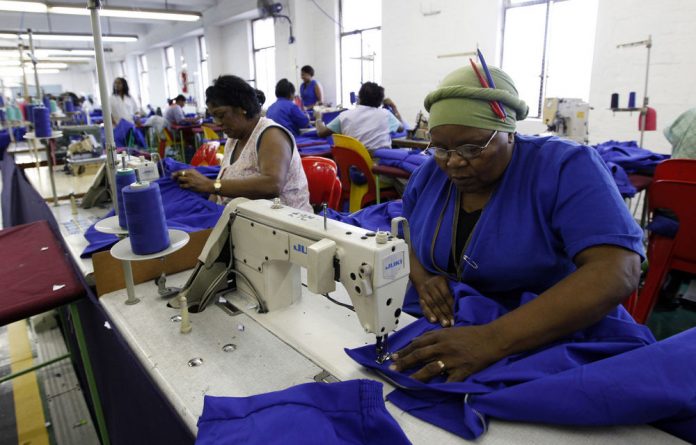 More than 300 factories which pay lower than the required minimum wage — a third of them Chinese-owned — face closure, with the potential loss of 20 000 jobs.

The national bargaining council in the clothing and textile industry shut down 30 non-compliant factories in KwaZulu-Natal and another 14 in Botshabelo and the former homeland of QwaQwa in the Free State last month, resulting in 3 700 job losses.

The closures culminated in a stand-off on Monday between factory owners in KwaZulu-Natal and the bargaining council, when the members of the Newcastle Chinese Chamber of Commerce closed their 85 factories in protest, temporarily laying off another 7 500 workers.

The factories reopened a day later, after a meeting called in Bloemfontein by the Free State minister for economic development, tourism and environmental affairs, Mxolisi Dukwana.

The council has now agreed to a 30-day moratorium on the shutdown of a total of 385 plants where workers earn less than the stipulated R324 weekly minimum wage, to allow stakeholders breathing space to thrash out a solution.

The mounting tension between Chinese and Taiwanese factory owners, on the one hand, and the bargaining council, on the other, coincided with President Jacob Zuma’s state visit to China last week to cement trade ties.

A spokesperson for the international relations department declined to comment, while the national labour department’s chief director of labour relations, Thembinkosi Mkalipi, said: “If I visit your house and information about me comes out there, logic tells me you’d be embarrassed.

“But, at the same time, the Chinese must understand that companies which invest in South Africa must comply with our rules and regulations.”

Chinese and Taiwanese factory owners are prominent in rural KwaZulu-Natal and the Free State, where they invested from the mid-1980s onwards, benefiting from the apartheid government’s “deconcentration” incentives. These fell away in 1990.

Employers and union representatives welcomed the moratorium, but officials in the national departments of labour and trade and industry could not confirm on Wednesday whether they would lead mediation efforts in the coming weeks.

Leon Deetlefs, the bargaining council’s national compliance manager, said: “The industry is in turmoil, it’s at the crossroads and decisions need to be taken at national level.”

Deetlefs defended the factory closures, arguing that the 385 non-compliant companies “alter the playing field” for the 558 companies registered with the council who pay the minimum wage.

“The net effect is that if you don’t close factories at the lower end, then the ones who do pay minimum wages can’t compete. Either way, the industry loses jobs,” he said. He confirmed that as many as 20 000 jobs could be lost if all 385 non-compliant factories are shut down.

Wayne van der Rheede, the general secretary of the Southern African Clothing and Textile Workers’ Union (Sactwu), said he hoped the government would resolve the dispute by insisting on compliance. “Its mediation can’t just be a talk-shop,” he said. Van der Rheede said the union supported the council’s closure of non-compliant factories even if it led to job losses because “we subscribe to the principle of decent work”.

“It’s not a question of whether a half loaf is better than a whole loaf. If you don’t obey the law, there must be consequences,” he said.

But Alex Liu, the spokesperson for the Newcastle Association of Chinese and Taiwanese factory-owners, said employers faced a “no-win situation”.

“If [locally-produced] garments are too expensive [compared with imported garments], then we’re out of business. Factory closures mean we can’t deliver goods as promised to our customers, which also puts us out of business,” Liu said.

He expressed concern about the composition of the clothing and textile bargaining council: “None of our members is represented on the council, so we aren’t able to participate in negotiations.”

Negotiations between unions and employer bodies in the council set minimum wages and conditions for the industry. Once gazetted by the labour minister, agreements have the force of law and are enforced by the bargaining council’s compliance mechanism.

Joked Liu: “Our members wanted to contact [Chinese broadcaster] CCTV during Zuma’s visit to tell it about the challenges of investing in South Africa,” but, “the majority of our members are loyal to this country and many have citizenship”.

The M&G understands that the Chinese embassy in Pretoria is monitoring the outcome of government mediation.

Meanwhile, Ferdie Alberts, the director of economic development in the Newcastle municipality, said he was “sympathetic” to the Chinese and Taiwanese factory owners who had been “targeted and labelled” by the council.

“They label the Chinese exploiters of labour, but the majority of the 358 non-compliant companies in this country are not Chinese-owned,” Alberts said.

“What makes me cross is that Sactwu, the bargaining council and government have not created one job in this town.”