Alice Walker in SA ‘to connect our struggles’ 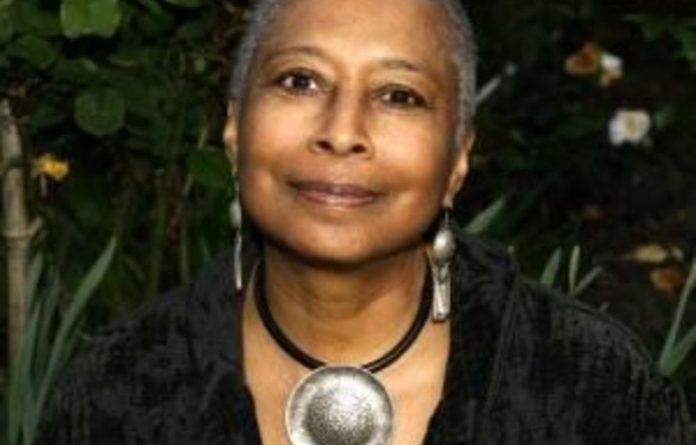 African-American writer Alice Walker is the first speaker from outside Africa to speak at the Steve Biko Memorial Lecture. However, she takes the long view that “there are no non-Africans”.

Walker admits she doesn’t go to many places but believes there are some places where she gets called. When that happens, she is always “honoured and happy to go to where that place may be”.

Welcomed by the Traditional Healers’ Organisation at the event entitled “An Evening with Alice Walker”, at the State Theatre in Pretoria on Tuesday, an emotional Walker expressed her delight, saying “Can there be any doubt that I am home, standing in the bright starlight of Steve Biko and the beautiful Biko family?”

Although this is not Walker’s first visit to Africa, it’s her first time in South Africa, where she has been invited to deliver the 11th Steve Biko Memorial Lecture at the University of Cape Town.

The Steve Biko Foundation and Walker aren’t giving away what will be discussed at the lecture on Thursday. Speaking at a press conference on Monday, Walker told audiences to “expect nothing”.

“I live frugally on surprise; that is to say, I don’t foresee even my own behaviour. I prefer to be spontaneous.”

All Walker revealed was that she is in South Africa to “connect our struggles”.

“What connects me to him [Biko] is knowing what it takes.”

Armed with a typewriter, a sewing machine and a suitcase
Born in Eatonton, Georgia, in the south of the United States to a family of farm workers, Walker attended primary and middle school at East Putnam Consolidated, under the leadership of her father, Willie Lee Walker.

She later attended the only high school open to black people in segregated Eatonton, Butler-Baker High, graduating in 1961 as class valedictorian.

Armed with a typewriter, a sewing machine and a suitcase, Walker enrolled at Spelman College in Atlanta, Georgia, in 1961 where she was involved in the civil rights movement. This was before she transferred to Sarah Lawrence College in 1964, where she was nurtured as a writer by her teachers.

After graduating from Sarah Lawrence in 1965, Walker accepted a position with the New York City Department of Welfare. A year later, with a $2 000 travel grant from philanthropist Charles Merrill, she moved to Jackson, Mississippi, and worked for the Legal Defence Fund of the National Association for the Advancement of Coloured People.

According to Walker, the south was then considered one of the most evil and dangerous places in the world. So dangerous, in fact, that Walker’s sister said she wouldn’t even fly over it.

“People were being lynched and buried in dams,” says Walker.

Walker and her then-husband — the first legally married inter-racial couple in Mississippi — were continuously harassed, even receiving notes from the Ku Klux Klan saying: “the Klan is watching you.”

Despite the dangers, Walker chose to dedicate her time in the south to “writing and trying to bring literacy to people who had little or none”.

Explaining why she moved back to Mississippi, in the south, Walker says it “all comes down to how much you love humanity”.

“Once you yourself achieve enlightenment, you want to share it. I believe that’s the route of all activism.”

‘Womanism’
One of Walker’s many titles is of a feminist, but she prefers the word “womanism”.

“Part of the reason for this is that feminism doesn’t always incorporate what women of colour bring. One of the key factors of womanism is to embrace the whole family, not just the man or the woman.”

This, Walker believes, is fundamental for a just society that begins with a sense of equality.

“Part of the work of healing is for women to actively pursue their memories. It’s a never-ending pursuit, this thing memory, but to be full women, to be juicy as women, we tend to lose so many of them [memories].”

The challenge of colour
Walker — who has been associated with several female and blacks-only organisations — believes it’s sometimes necessary to surround yourself solely with your “own kind”.

“I think it’s useful to be with your own kind because sometimes you need to explore things together in secrecy or privacy.”

Walker’s biggest seller, The Color Purple, made her the first black woman to win the Pulitzer Prize.

Told in the form of diary entries and letters, The Color Purple takes place mostly in rural Georgia, focusing on female black life during the 1930s in the south of the US. Some of the more prominent themes addressed in the novel include relationships, racism and sexism.

“The work of the artist is to show some of the ghastly places where humanity has fallen.”

America’s black president
Walker wrote “An Open Letter to US President Barack Obama” in November 2008 and it was published on Theroot.com. In the letter, Walker addressed the then-newly elected president as “Brother Obama” saying: “Seeing you take your rightful place, based solely on your wisdom, stamina, and character, is a balm for the weary warriors of hope, previously only sung about.”

Asked about her feelings on Obama’s election, Walker doesn’t mince her words, saying she is happy to have him as her president, although she doesn’t agree with him on “three or four things”.

“I don’t agree on war. To go to war is effectively a failure and I think the Israeli situation is terrible, but overall he is a breath of fresh air to our country.”

Media freedom
In her book The World Has Changed: Conversations with Alice Walker, she congratulates the US on being able to elect someone different and black.

“Of course we haven’t accomplished our goals, but now we can see our own strength.”

The influential essayist, poet, activist, spiritual mentor and blogger says Biko’s determination to tell the truth as he sees it has been a major inspiration for her.

“He was a fearless writer, which is always inspiring for me.”

Asked about her thoughts on media freedom, Walker is clear that it comes with responsibility.

“It seems the problem is that journalists have lost their sense of responsibility for telling the truth,” she says, adding: “We can’t have a healthy community that is based on lies.”

Walker said she is very happy to be invited to give this year’s lecture in honour of Steve Biko, as she has things to share with the South African audience.

“There is a way to honour our martyrs, heroes and sisters by speaking for them and saying we do still remember and we appreciate and are grateful.”