If Div gets the boot … 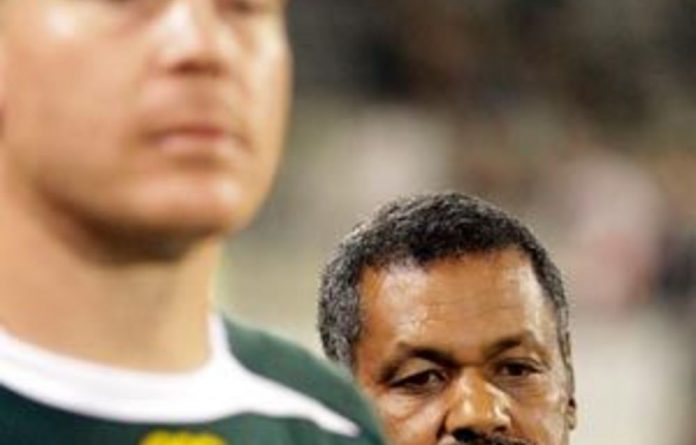 The South African Rugby Union (Saru) is not about to do anything rash. Its president, Oregan Hoskins, has a legal background and the fires that he has fought since taking over from Brian van Rooyen have taught him to respect due process. Past presidents have fallen into the “Hey, let’s do the show right here!” trap, but not Hoskins.

This week Saru reminded the press in a series of releases that there is a process to be followed and that, at least for now, Peter de Villiers remains the coach of the Springbok team. The performance of the Springboks in the Tri-Nations will be mulled over and then De Villiers will be formally interviewed about his uncalled-for comments regarding the Bees Roux murder trial.

While all that is happening, the contracted Springboks will be undergoing a four-week conditioning course in Cape Town and will be available only for the Currie Cup during the last three weeks. Those who enjoy conspiracy theories might think it germane that the national squad will be camped in the same city as its employer, rather than sowing unrest further afield.

Unrest there undoubtedly is, but is it time to wield the big stick or time to rally around the embattled coach? Former Springbok prop Toks van der Linde thinks that De Villiers should stay. “We don’t need a new coach for the World Cup,” Van der Linde told the Mail & Guardian.

“Remember how many key players he hasn’t been able to pick this year: Fourie du Preez left a big hole, then there’s Frans Steyn, Andries Bekker, Heinrich Brüssow, Bakkies Botha. So to fire the coach now is not the right thing to do. He needs help and if you look at his results overall, they are not that bad.”

Another former Springbok prop disagrees, however. Robbie Kempson, currently the scrum coach at the Southern Kings, said: “The Boks haven’t advanced in any way for the last 18 months under him. There’s an air of complacency around most of the senior players in the squad. He does what he wants and doesn’t have any discipline, particularly around the way he interacts with the press.

“Tactically he is naive, especially around substitutions. He almost lost a Test against the Lions last year and lost one against the All Blacks this year because of it. He must go and his coaching staff, which he chose, must go with him.”

Kempson’s stance reflects the majority view, but even if Saru decides to bite the bullet and fire De Villiers, they must be prepared for a dirty war. For one thing, they must address the issue of colour. De Villiers was the first black coach of the Springboks and Hoskins made sure that everyone understood that he was not necessarily the best man for the job when the appointment was made three years ago.

Radical move
Whether the race card is played by the coach, parliamentary sports portfolio committee chairperson Butana Komphela or someone else, it is safe to assume that it will be played.

Under pressure De Villiers might blame his lieutenants and suggest the radical move of replacing Springbok captain John Smit with Chiliboy Ralepelle. Through no fault of his own, Ralepelle has become a part-time rugby player in the past three years. His 16 Tests have featured just two starts, against the British and Irish Lions last year and against Italy in Witbank this year.

Injuries and the enduring qualities of Smit have kept Ralepelle from expanding upon the great promise he showed at youth level. While he has been gathering splinters on the Springbok bench, other hookers that get regular game time have risen in the rankings. But Saru has invested much in the first black man to captain a Springbok team and now might be Ralepelle’s moment.

Of course, Ralepelle may be promoted whether or not De Villiers remains in the top job and that might rip the bottom out of his bargaining platform. If Saru sacks De Villiers, the obvious replacement is Allister Coetzee. The coach of Western Province also took the Stormers to the Super 14 final this year and was part of Jake White’s team that won the World Cup in 2007.

Coetzee received an endorsement from White this week. The former coach said: “Allister was the man who should have been appointed to replace me after the last World Cup. I said so at the time and I remain convinced about that.”

White took the chance to throw his own hat into the ring, suggesting he could do the same kind of “ambulance job” the late Kitch Christie did in 1994. But his acrimonious parting from Saru suggests that he has burned too many bridges to get the job.

There is another possible scenario, however. If Coetzee were to be appointed, Saru would need to give him the same kind of expert back-up that De Villiers has enjoyed. That would mean appointing a coaching team, one that would include a technical analyst. And the best technical analyst that the Boks have ever had just happens to be Jake White.

Zim rugby team off the streets