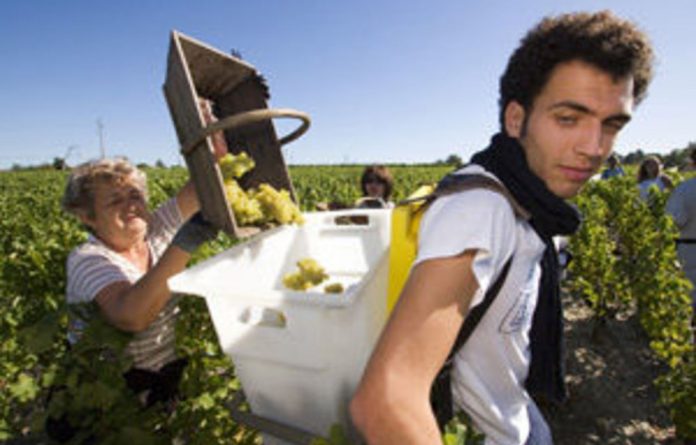 There’s something very lovely about picking a bunch of grapes. Reach into the leaves, cradle the fruit in your hand, search with your fingers for the stalk, the umbilical chord to the vine and, with a delicate pair of red-handled secateurs, snip. There you have it, a beautiful bunch of grapes to be laid in your basket.

I can see that if you were here for the whole harvest and you were being paid not very much to stoop all day long in the sun, the novelty could wear off quite quickly. I’m not though, I’m just playing at working.

And it’s amusing me.

There’s something even more lovely about picking these grapes here outside the village of Oger in northeast France. Because this bunch I’ve got in my hand isn’t going to end up in a bar of chocolate, or a value pack of supermarket muesli. Oh no. These little babies, white chardonnay grapes, will be turned into the finest Champagne. Oger — because of its position in the Champagne region, its elevation, its micro climate and the quality of its soil — is one of only 17 villages to have grand cru status. In layman’s terms grand cru means very good.

Joining in the Champagne harvest is one of the perks of the tour of the region I’m taking, a three-day “harvest weekend” with Grape Escapes.

Next stage is the pressing. I’m witnessing this at a small family Champagne house called Jean Milan. Four thousand kilograms of grapes, a (very) few of which were picked by my own fair hands, are tipped into the press, a big playpen made of slatted oak. This one has been in use since 1945, though the muscley Frenchmen who used to operate the press have been replaced by hydraulics. They still have to tip the boxes of grapes in, and pitchfork them around a bit, before the press starts to do its squeezing. I could probably get involved here too if I wanted, but I’m now on strike.

It takes a while to squeeze those grapes dry — five pressings, each an hour long. From 4 000kg of grapes, you get around 2 500 litres of sweet juice. Delicious, but no good for a wedding, a birthday, or even just a Tuesday night. Let’s turn it into bubbly.

I see the next stage over the road at Henry de Vaugency, another family-run Champagne house. Boss Pascal shows me his special room, where all his wizardry and magic happens. From the press the juice runs into a big vat, where it sits for 24 hours. This allows the sediment ­- pips, bits of vine, ladybirds (I saw several), and so on to settle. The clear juice then runs off into another vat, sugar is added if needed (not this year, the grapes are sweet enough), and over a few months the first fermentation takes place. At the end of which, you have white wine. Pretty rough white wine to be honest. But it’s okay, there’s a whole second fermentation to come.

The wine then goes into bottles, with a little yeast and a little sugar (I have to be vague at this point, if I were more specific I would have to kill you).

Under strict conditions it develops for, at least, another one-and-a-half years. A good place to see this is at the Ruinart Champagne house on the outskirts of Reims. A staircase descends steeply into a network of tunnels and cellars that lead to extraordinary old chalk pits. It’s cool, dark and a bit creepy down here, easy to get lost. But that wouldn’t be such a bad thing because the constant year-round temperature is perfect for millions of bottles of Champagne to be aged. Death by Champagne, not a bad way to go.

At the end of the ageing process, which takes between three and 12 years (there’s no instant gratification in winemaking) — the sediment is drawn to the neck, removed and the bottle is corked. And voila, you have yourself a bottle of fizz.

Mmmm. Or Mmumm if you’re down the road at the GH Mumm house. Driving around here — Reims, Epernay and the surrounding villages — is like driving round the inside of the locked cabinet at the off-licence. Pommery, Bollinger, Krug, Veuve Clicquot, Piper Heidsieck and so on. Rap stars can get their Cristal over there at the Louis Roederer house. That’s the abbey of Hautvillers where Dom Perignon himself was a monk. He may not actually have invented Champagne, as popular myth has it, but he was instrumental in developing the process and his name lives on in the prestige cuvee of Moët & Chandon.

All the houses do tours. Some offer a range, depending on whether you think you’re a bit of a buff and know a pinot meunier from a pinot noir and what prestige cuvée actually means or you just want to see a bit of the process and have a nice glass of bubbly at the end of it, before moving on to the next place — touring a pretty corner of France getting slowly, and delightfully, fizzled. I think I tend more towards the latter, to be honest.

Although I’m visiting the Champagne houses as part of a tour, you could easily visit them all independently. The smaller houses are actually more fun to visit — such as Henry de Vaugency, and Jean Milan, where I once worked. Smaller means more personal so you’re more likely to bump into and perhaps share a glass with the owner.

If you’re lucky he may show you how to open a bottle with one strike of a sword, a trick that is guaranteed to impress your friends back home. If you’re luckier still, he may let you get involved and have a go with a pair of red-handled secateurs, stories of which are guaranteed to bore your friends back home. Who cares though? I helped make that Champagne. Cheers. —

Give credit where credit’s due

SA wines take a fair step in the ethical direction