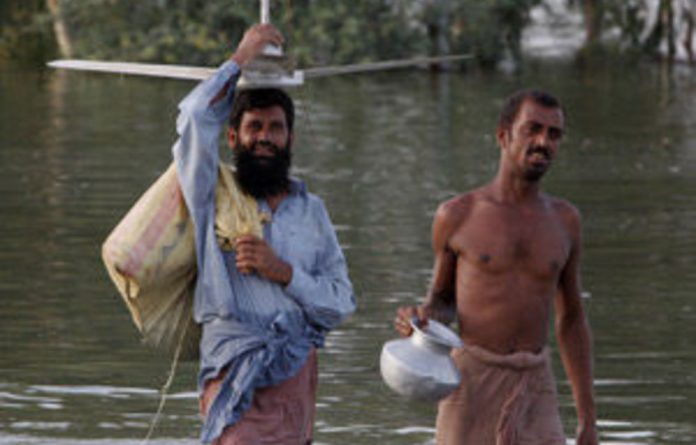 The worst of the flooding may be over but prospects are bleak in Pakistan, where disease, famine and the coming winter threaten to intensify the humanitarian crisis. But international aid has been slow in arriving.

“In normal circumstances, floods are no big deal. It just washes away the crops and then people go back to their homes. What people fail to understand is that a few hours ago, they were still evacuating people,” said Dr Imtiaz Sooliman, director of local aid organisation Gift of the Givers, who describes the situation as “an expanding disaster that is gaining momentum every day”.

Pakistan’s plight has largely fallen off the radar in the last few weeks, leaving many people with the impression that the floods have ended with a low cost to life. The flooding, after all — brought on by seasonal monsoon rain — started almost two months ago.

A video from Médecins Sans Frontières (MSF) highlighting the struggle they are having in Pakistan to keep waterborne diseases such as cholera and diarrhea at bay.

Monsoons are common in South Asia at this time of year but this year they have been particularly harsh. Whole villages were washed away in what is said to be the worst flooding in the region in 80 years. While the death toll has remained relatively low at just under 2 000, the waters raging through the country have been merciless.

But more people have been affected by the flooding in Pakistan than in the Indian Ocean tsunami, the Kashmir earthquake and the Haiti earthquake combined. The numbers are shocking:

For displaced Pakistanis, the challenge to survive the effects of the flood are only beginning. With almost one-fifth of the land under water — an area roughly the size of England — and continual flooding there is little available dry land to set up even a temporary home. In a country where two-thirds of the population is dependant on farming, 3,4-million hectares of crops have been lost.

Clean drinking water is hard to come by and drinking from contaminated water sources has led to a virtual epidemic of gastroenteritis. It is a hot, humid country with temperatures climbing to 40°C. With no access to soap, clean water or fresh clothes, many people are living in continual wet and damp conditions. Skin conditions and respiratory illnesses are now also on the rise.

The floods in Pakistan have forced tens of thousands of people to leave their homes to set up camp without any access to medical care. Médecins Sans Frontières (MSF) is trying to assist and has already set up three mobile clinics in the Sukkur area.

According to Oxfam, cases of acute diarrhea, skin diseases, acute respiratory infections and suspected malaria have more than trebled in the last two-and-a-half weeks.

Dr Tankred Stoebe has been working in a diarrhea treatment centre set up by Médecins Sans Frontières (MSF) alongside a hospital in the town of Kot Addu in Punjab province, Pakistan.

When MSF arrived, the hospital was buried under a metre of mud. This had to be removed and the hospital cleaned and electrified before staff could move in.

He sees 140 new patients suffering from acute watery diarrhea every day. Many of these patients need to be hospitalised. About a third of them are young children under the age of five.

“It’s an easily curable disease but it needs to be treated quickly,” said Stoebe. If not, the disease could spread and vulnerable people, like the young or the infirm, could die. Dehydration caused by acute diarrhoea can also excerbate malnutrition. And many Pakistanis were malnourished long before the floods arrived.

Diarrhea and now even cholera is being spread through fecal-oral contamination.

The high water table also makes it difficult to dig latrines. Although it is possible to build elevated latrines with a plastic holding tank for waste, this is only possible where people have settled down. For communities living in temporary settlements, often on roadsides or bridges, providing for sanitation is more difficult.

Now aid organisations are warning that the disease profile may be shifting and that diseases such as malaria and dengue fever could begin to take over.

“Mosquito-borne diseases such as malaria and dengue tend to be a bigger risk after main flood waters have subsided, as they breed in still and stagnant water, not rapidly flowing rivers,” said Oxfam spokesperson Rebecca Wyn.

Misconceptions
The United Nations initially appealed for $459-million in aid, only 67% of which was funded. But with the growing health crisis, this figure is likely to triple in the coming weeks. A number of factors have contributed to this.

Misconceptions about the scale of the disaster, with its low death toll, combined with disasters in other parts of the world, and Pakistan’s international image as a corrupt state with links to terror groups have resulted in a muted international response.

In addition, European countries hard hit by the recession have not been able to donate as much as they would have otherwise. France for example has committed less than $3-million.

For Sooliman, these reasons shouldn’t stand in the way when it comes to helping the ordinary men and women affected by the floods. “We don’t have to depend on government. Ordinary people can help with this,” said Sooliman.

Gift of the Givers has raised R10-million for the relief effort — about half as much as that put forward by the French government. This money has been raised from ordinary South Africans donating modest sums of money.

As the number of people affected by the floods continues to rise, more aid is clearly needed.