Lunch at the supper club 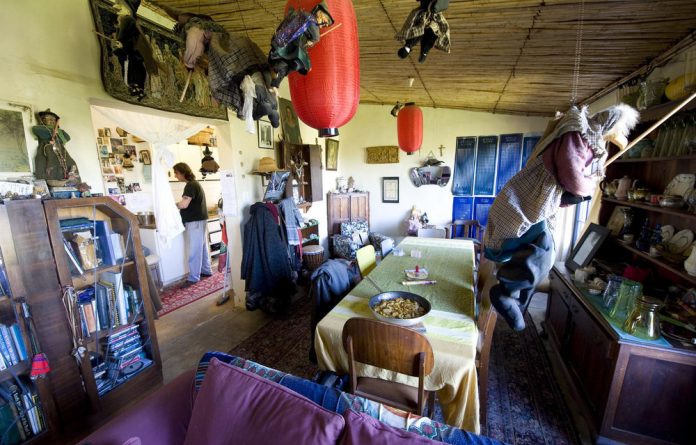 I’m hardly out of the car and Guiseppe is there to welcome me with an all-encompassing bear hug. We haven’t seen each other for seven years. He’s an unusual character, not exactly eccentric, but certainly unconventional and big-hearted.

Guiseppe Massolini was born in Dar es Salaam. His step-great-grandfather (who died in 1976) was originally a Sikh. He cut off his kesh and turned Catholic to marry and take care of the Italian widow he had fallen in love with and her 11 kids. Something about the romance of that act still informs Massolini’s life.

I met chef Guiseppe (he doesn’t care for being called Mr Massolini) in the 1990s when he ran a popular supper club in an old house on Buitenkant Street. I know many Capetonians who still pine for those celebrated evenings. The place was crammed with Art Deco furniture and light fittings.

Three nights a week he would have two tables with about 30 guests. It was fully booked for six months in advance. I’d stand in the kitchen (where he taught me to make potato gnocchi), paging hopefully through the reservation book looking for an open seat. Sometimes I’d end up in the scullery.

One day I discovered Guiseppe had sprouted a large tattoo. Shortly afterwards he sold up Buitenkant Street and moved to Barrydale, the gateway to the alternative Karoo. We soon lost contact.

It’s exhilarating to report that he is now back on the gastronomic circuit with a “supper club” that serves lunch. These lunches frequently end with a tarot card reading.

For as long as I’ve known him, Guiseppe has been teetotal, but that doesn’t stop the Paarl locals from affectionately calling him “Gesuipie”.

Guiseppe’s home is off the R101 on the Belair farm, which has a luxury guesthouse complete with Lombardy poplars and a full-size Chartres labyrinth of yellow gazanias. The farm once reared racehorse studs and is home to a multiple winner, Occult, the only South African-bred horse to win the coveted treble: Republic Day, Durban July and Gold Cup. You’ll find Guiseppe in the converted stables.

The driveway is bordered by lemon trees, the sweetish, wrinkly skinned Cape lemons that turn orange, and the smooth Eureka strain.

Guiseppe leads me in through the back. The entrance has a peach-pip floor. “You should take off your shoes; it gives a wonderful foot massage,” he says.

The grounds are populated by angels, Buddhas and garden gnomes. Guiseppe makes his own Madonnas and sculptures out of cement. To the rear is the folly, a mock classical Greek ruin with pillars. Granadilla vines shade an outside table. Hadedas and sacred ibis fly overhead. “Nature is my divinity,” he says.

In his permaculture garden Guiseppe grows some of his vegetables, including tomatoes, bell peppers and a variety of bitter, reddish lettuce. He tries to source all his produce from within a 10km radius in the slow-food way, though in Italy this is far easier to do.

His cheeses come from Zandam, among the first local producers to make mozzarella, ricotta and provolone in South Africa.

The kitchen is a long, narrow galley. My eye falls on a photo of Guiseppe in uniform during his army year in Italy; he is putting on a brave face.

With 27 dolls of witches, his granny’s gorgeous Art Deco pink seashell light from Dar es Salaam hangs from the ceiling in the informal dining room. The bric-a-brac furnishings include Art Deco cabinets and chairs and a 1960s Formica table graced with a vase of tall arum lilies. In winter the fireplace is lit; in summer it’s possible to dine outside on hot days.

After this long descriptive monologue, whatever little space I have left must be dedicated to his glorious food. The antipasto is grilled crostini “alla moda” topped with pimento olives and tomato paste.

A typical set menu includes two salads. We had fresh lettuce with fennel bulb and an outsize green salad with balls of boccini cheese.

You need to pace yourself as desserts are a strong point. There is double-chocolate tart, a sort of death alla Venezia; almond and butter tartlets; the type of strudel with which Marie Antoinette bankrupted the monarchy — pears, pink apples, cinnamon cloves in a pastry, with custard and gooseberries, blueberries and strawberries, swamp mint and satsuma (a kind of naartjie) and ­garnished with lavender.

To wend one on one’s way, Guiseppe pours bottomless rounds of espresso and offers plates of almond, apricot and cherry biscotti.

Guiseppe’s Italian Catering. Book three weeks in advance. R200 a person. A minimum of eight, a maximum of 12 guests. Arrive at noon, eat from 1pm “until whenever” on a bring-your-own-bottle basis. A donation for tree planting is always welcome. More than 100 trees have been planted as a result of this effort. Tel: 021-863 1187