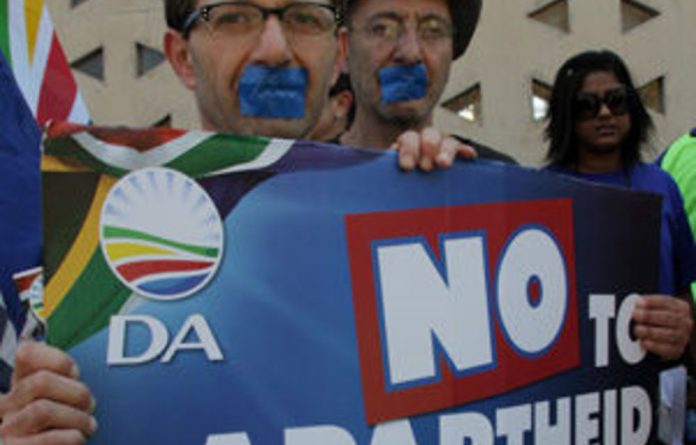 The Protection of Information Bill and the proposed media appeals tribunal were tools to mask corruption, DA leader Helen Zille said on Saturday.

Zille and Patricia De Lille led supporters on a march from Parktown to the Constitutional Court in Braamfontein to protest against the Bill and the tribunal.

Addressing supporters outside the court on Constitutional Hill, Zille said the Bill should be called “the Protection of Corruption Bill” as it sought to protect corrupt ruling party members.

Zille referred to her experiences as a journalist in the 1970s, where the newspaper she worked for was closed down as a result of the apartheid media tribunal. She said this was the same as the tribunal the African National Congress wanted to introduce.

Zille said the apartheid media council had not been as bad as the one the ANC planned on introducing, because it was headed by a judge the National Party tried to control.

“This media tribunal will also be accountable to politicians,” she said.

“When I was 26, a judge found me guilty of misleading [reporting] and this was the time I had just started my career in journalism.

“The newspaper had to publish an apology on the front page, even though we had a certificate to prove Steve Biko died of brain damage.”

Zille said the paper had to close down because it had to spend money defending itself against the government.

The protesters also planned to hand a copy of the Protection of Information Bill over to a representative of the Apartheid Museum.

“We are going to ask them to hang it in the museum. We want it up with the past laws, to show that the ANC laws belong in the Apartheid Museum,” said Zille.

The crowd was also addressed by DA youth leader Makashula Gana, who said the protesters had not marched to the Constitutional Court because they wanted keep fit, but to prevent the erosion of the Constitution and democracy.

“The Protection of Information Bill will take away blood from the hard earned democracy. If government was clean it would not be worried about anything,” Gana said.

“What type of government says it guards the nation’s national interest but wants to prevent flow of information to its citizens?” asked Gana.

De Lille — who was recently appointed minister for Social Development in the Western Cape — after combining her party with the DA, said: “The ANC thinks they have the right to steal from the poor.”

She accused the ruling party of a tendency to shoot the messenger and not read the message. She said the ANC could not blame the media when it reported on corruption in the government.

They hoisted placards reading: “No to apartheid censorship” and, “ANC, NP, VF and Nazi all the same.” Other boards read: “Are we heading to gloomy Zimbabwe” and “Do every thing but do not forget to shut that puppy Malema’s mouth.” – Sapa