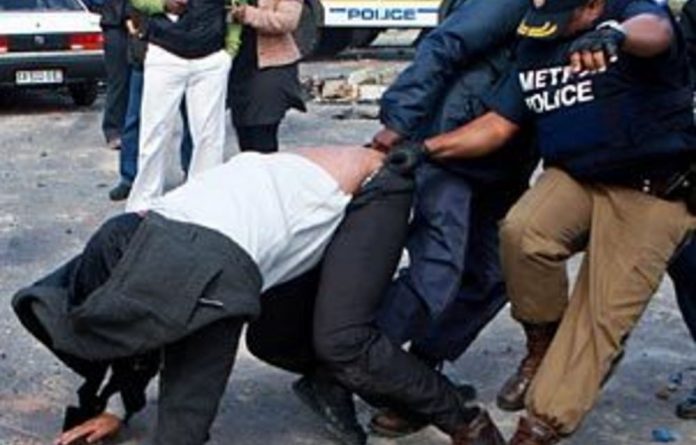 Sixty-two people were arrested after 18 people were injured in a clash between metro police and civilians in Hout Bay on Tuesday morning, Western Cape police said.

Of those injured, 15 were metro police officers and three were civilians, said Warrant Officer Tanya Lesch.

Violence broke out when community members clashed with metro police as the City of Cape Town dismantled illegal structures in the area on Tuesday morning.

The city’s land-invasion unit was in Hangberg at 6.30am to remove structures built in the firebreak near Hangklip, which was a significant fire danger to local residents, the city’s spokesperson, Kylie Hatton, said.

“Community members who were unhappy with the dismantling of the shacks, built between Hangberg and the Sentinel Mountain, started throwing stones at the city’s officials and law enforcement officers, hurting 15 metro police officers.”

“The structures are built on the slopes of the Sentinel, a world heritage site. People just started building illegally here and the area is not safe for them as it is a firebreak.”

The situation had calmed down at 4pm but police continued to monitor the area, said Lesch.

Condemnation
The Congress of South African Trade Unions (Cosatu) condemned the violence, calling it an attack by the Western Cape government on the people of Hout Bay.

“The attack on the poor community of Hout Bay is nothing new and is similar to the attack we have seen at Imizamo Yethu informal settlement,” Tony Ehrenreich said in a statement.

“Cosatu believes that a negotiated solution can be found … The high-handed action we are seeing now from government is typical of Democratic Alliance [DA].”

Ehrenreich said the DA had in the past promised the “rich white community” of Hout Bay that it would act in their interest.

Cosatu was going to defend the people of Hout Bay against “this war” on the poor.

“[We] are going out there now to see how we can help the people of Hout Bay to secure their homes.” — Sapa