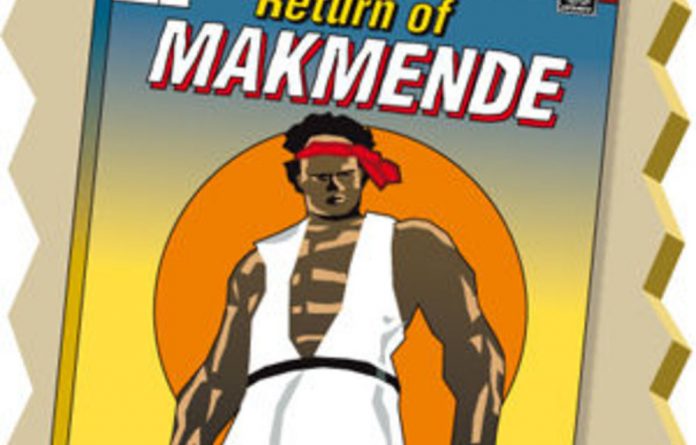 It’s not known where he has been all these years, but he made seismic shockwaves when he landed.

They said he once scared the crap out of Death, that “Death had a near-Makmende experience”. They said: “He doesn’t mow his lawn; he dares the grass to grow” and that “Martin Luther King had a dream, until Makmende woke him”.

All I knew about him was his name. I googled him but Google said it “was still searching for Makmende”. His legend was growing fast, though. The fella seemed to be a heavy-hitter.

I heard United States President Barack Obama has just one reference on his CV: Makmende’s. For a brief moment, I thought the people praising him were smoking something illegal until Makmende made his presence felt.

The first thing he did when he landed was to save a damsel in distress who’d been kidnapped. Then I discovered his true nature.

Makmende is a superhero, a kung fu martial-arts specialist with an Afro who loves wearing Seventies fashion. He wears a red cloth round his head like Rambo, his face is in a permanent scowl .

Of course, it didn’t take long for the world’s press to notice his supernatural talents and, almost immediately, Makmende was making waves around the world. CNN crowed about the “world’s newest superhero, an African”, more specifically, a Kenyan.

It is now said that when Makmende appeared on CNN, CNN became famous. Makmende first emerged in the Eighties, sometime after Clint Eastwood uttered “Make my day”.

It’s believed “Makmende” is a mispronunciation of Eastwood’s classic quote and has since become Swahili slang for “hero”. His re-emergence after two decades came after three local musicians, collectively known as Just a Band, sat down to shoot a fictional movie called Makmende Returns for their song Ha He!.

That was when our Kenyan superhero went viral. To make their short film, the band members called friends to wear Seventies attire from their parents’ wardrobes; the script was a not-soserious take on the Seventies black flick, Shaft. It was a hit.

It shows an easy-going Afro dude with a smirk on his face arriving at the neighbourhood outpost where he heads straight over to beat up all the bad guys in the ‘hood. Little did they know that the main character would overshadow everything — including the band .

They urged their friends to hype Makmende on Facebook and Twitter by changing their names to Makmende and their status to one-liners like “Who is Makmende?” By the time Just a Band was uploading the video to its YouTube site a week later, a fan had set up a Makmende website and Makmende t-shirts were already being printed.

Now, it seems the three band members have gone ‘makmendian” too. Their website says Dan Muli just returned to Kenya after years of touring with a Tuareg caravan led by a Nubian beggar. After an “attempted exorcism”, he came back home to work as a comic-book restorer.

Bill Sellanga woke up from “13 years of hypnosis” and when he came to, he found himself living in an ” abandoned convent in the outskirts of Nairobi and all he had in his possession was a guitar”.

And Jim Chuchu came to the city after “spending years serving coff ee in Kilgoris and losing a close friend”. He sought solace in the sewers of Nairobi, which he says have great acoustics.

As we cross fingers that Makmende will emerge on the silver screen, I leave you with this: “Makmende is so well-known that when something looks suspicious, rats say, “I smell a Makmende.”

Munene Kilongi is a freelance journalist based in Nairobi