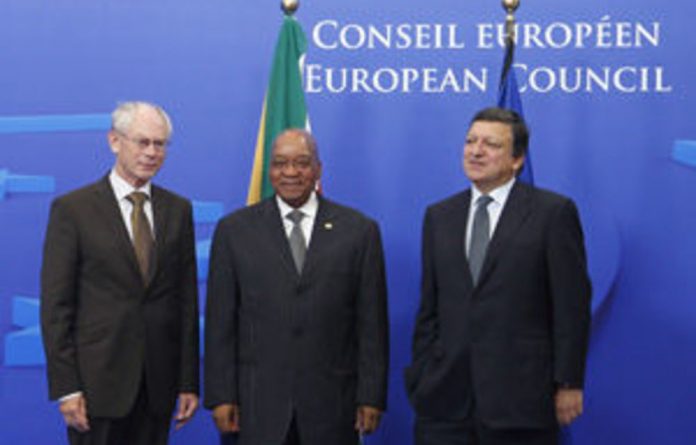 This after South African President Jacob Zuma pressed for the European Union to lift targeted sanctions against Zimbabwe during his visit to Belgium this week as part of the one-day annual EU-South Africa summit in Brussels.

Speaking at the summit, Van Rompuy noted Zimbabwean moves to create a new constitution as part of a road map to elections, a process launched by the unity government formed by President Robert Mugabe and Prime Minister Morgan Tsvangirai last February.

“In case of positive developments in Zimbabwe we’d be ready to look at fresh measures,” said Van Rompuy, the president of the EU.

Mugabe, 86, and around 200 of his aides are subject to travel bans and asset freezes in the European Union and the United States, who accuse his regime of repeated human rights abuses and denials of basic freedoms.

The EU has also frozen the assets of 33 companies linked to Mugabe’s Zanu-PF party and bans arms shipments to Zimbabwe.

A shot at success
“The EU wants to give Zimbabwe chances of success,” said the president of the 27-nation bloc, noting that the EU as a whole had offered $490-million over the last 18 months to projects in Zimbabwe aimed at better governance.”

The EU last year slapped a 12-month extension on its sanctions against Harare, which include an embargo on arms and police weaponry, as well as the travel ban and asset freezes on Mugabe and his aides.

Meanwhile the EU has pledged $165-million in aid to South African primary schools — the single largest ever development cooperation programme between South Africa and the EU.

“We welcome the fact that the focus is on our apex priority, education,” Zuma said at the signing of the primary education policy support programme.

Largest partner
South Africa had agreed to “co-operate” in facing challenges on all on issues of development and peace and security.

“We emphasised the importance of an effective multilateral system and multilateral institutions, especially in pursuit of co-operation on development, peace and security, human rights and democracy,” Zuma said.

The EU is South Africa’s largest trading partner, with trade flows valued at $33,7-billion in 2009, and its largest aid donor. — Sapa