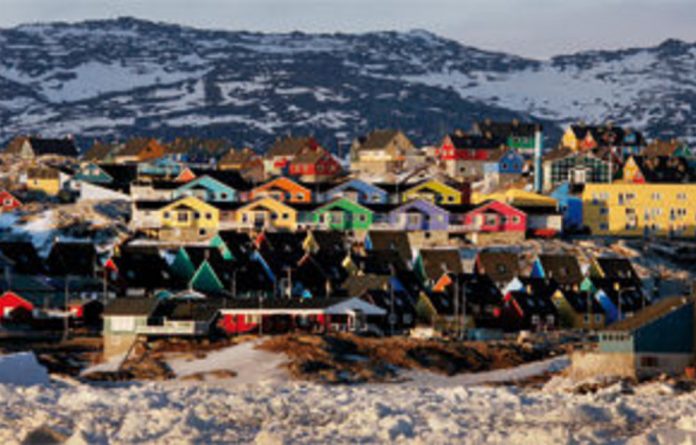 The fight was over almost before it began.

A short, middle-aged woman had smashed her fist into the face of another female drinker and, within seconds, was dragged to the door by a hulking bouncer and flung on to the streets of Nuuk.

It was midnight on a Tuesday but the atmosphere in the Kristinemut bar resembled a hard-core weekend: raucous band, chaotic dancing and more than a handful of revellers (of all ages) best described as “blotto”.

Not everyone in the bar may have realised it, but these residents of Greenland’s capital had good reason to celebrate. That morning local television reported that traces of gas had been discovered by the British exploration company Cairn Energy in Baffin Bay a few hundred kilometres to the northwest.

If these first hydrocarbon traces prove an accurate indicator of major reserves below the Arctic seabed, they may in time produce untold wealth for Greenland’s population — financially dependent on Denmark — of 56 000 Inuit and other ethnic groups, clinging to existence 730km from the North Pole in one of the world’s harshest terrains. The bulk of this huge land is a vast — and breathtakingly beautiful — white desert.

A layer of ice, 3km thick, covers 80% of the country for 12 months of the year. Even along the coastline, where the population is huddled, the black rock of the precipitous mountains and brown vegetation are visible only in the summer months.

With virtually no trees and a winter temperature that can sink as low as -70°C, the name Greenland is misleading — deliberately so, in fact. It was an early “marketing tool” used by Erik the Red in 982, as he tried to lure fellow Vikings from warmer climes to settle here, having failed to sell a similar message about Iceland.

These days the terrain is even bleaker (where once pigs and cattle roamed in the south of the country, now there are polar bears, seals and walruses), but this frozen and largely unexplored land will not deter today’s prospectors, tempted by the possibility of an Arctic oil rush.

The kind of oil and gas reserves believed to reside in the wider Arctic region could be worth as much as $7-trillion, which is why all the big oil companies are queueing up to woo the Greenland government into granting them exploration licences.

Environmentalists, of course, regard the exploitation of one of the last remaining areas of pristine wilderness on the planet with horror and up in Baffin Bay there has been physical confrontation between a Greenpeace ship, Esperanza, and the Danish navy as it defends the Cairn Energy rig from marauding protesters.

The setting could not be more symbolic — around them, glaciers and icebergs melt as a direct result of global warming, a phenomenon that will only be exacerbated should the Arctic be allowed to give up its oil and gas reserves. Inside the Kristinemut bar, Nive Nielsen, a local singer with a growing international reputation, is decidedly sober about the implications of any major oil find in Greenland.

“I guess what I would like to see is the government tread very carefully. I am worried they are rushing ahead too quickly [with oil licensing],” she said. “Most people here — possibly 80% — think this drilling can only be good for Greenland, but we have already seen the traditional ways of doing things being eroded and people herded into [modern town-housing] blocks.”

Kenni Rende, a 44-year-old shop assistant at the Nota Bene electronics shop, is more positive about the prospect. “We have always believed there was oil and gas off this island. We’ve been waiting for something like this to happen for decades. I hope it will provide income for Greenland, so we can finance our way to becoming a more independent nation.”

His upbeat mood is, not surprisingly, shared at the Bureau of Minerals and Petroleum a few blocks away, where Henrik Stendal has been digesting the news of the Cairn find. “It is exciting — This amounts to an appetiser for all oil companies to come here and do more exploration,” said Stendal, who is head of the bureau’s geology department.

He claimed not to have known about Cairn’s find until the company announced it on August 24 with a simple statement: ‘First hydrocarbons discovered in Baffin Bay basin by T8-1 well, which has encountered gas.”

The release of drilling information is always sensitive. It can send a company’s share price soaring and act as a magnet for competitors. As a result, relations between small government and Big Oil are complex.

The Greenland government is keen to keep the discovery’s momentum going and attract new investment but it is also anxious not to upset Cairn and its investors by speaking out of turn. Cairn Energy’s founder and chief executive, Sir Bill Gammell, said he was “encouraged that we have early indications of a working hydrocarbon system with our first well in Greenland, confirming our belief in the exploration potential”.

Greenland is the least densely populated country in the world and desperately dependent on fishing, a small amount of tourism and one working gold mine. The national books are balanced courtesy of a Danish kroner 3-billion (R3.7-billion) annual handout from the Danish taxpayer.

While the hunting of seals and other local animals is still practised by a handful of Greenlanders, the bulk of the population finds work in the public sector — in schools, hospitals or administration. But all that would change if the oil industry moved in.

According to a 2009 United States geological survey, there could be 90- billion barrels of oil — a third of the size of Saudi Arabia’s reserves — and 50-trillion cubic metres of gas in the wider Arctic region. Tentative drilling has already begun all the way from the Chukotka Sea off Alaska to the Faroe Islands north of Scotland.

Few regions, though, have been pushing as hard to attract Big Oil as Greenland. And, while the gas discovery has centred attention on hydrocarbons, there is a parallel drive to uncover all sorts of precious metals, including diamonds, rubies and rare-earth elements. This year the government will decide whether uranium for nuclear power stations could also be mined here.

As for the islanders themselves, they are very focused on self-determination and self-sufficiency. Unemployment in some towns now runs as high as 15% and the standard of food in the shops is often rudimentary. And while the number of people living below the poverty line was last measured at 9%, the suicide rate increased from a historically very low level in the 1970s to one of the highest in the world by the mid-1990s, at 107 per 100 000 people.

Clearly, politicians in Nuuk regard economic and political independence as the path to a better future for their people. But while they want to see more oil exploration — and hopefully production — they also insist their safety regulations meet the world’s toughest standards, aware that most Greenlanders fear the health issues that could arise from an influx of oil companies.

The politicians’ and public’s views on global warming — another reason for Greenpeace’s presence in Baffin Bay — are more mixed, however. Global warming might be threatening to harpoon the local hunting way of life, but it will lessen the hardships of living in a country where burying dead bodies in the frozen ground can be problematic.

The melting of the local ice cap, which covers 80% of the country’s land mass at present, will raise sea levels in countries such as Bangladesh and the Maldives — but it could open up further economic opportunities in Greenland. In future Nuuk might act as a lucrative stop-off point for ships traversing the world via the currently iced-up North West Passage and also make it a centre of onshore mineral mining.

“Yes, we are gaining more land, you can say that,” said Stendal. And a spokesperson from the Greenland Natural Institute of Resources and Climate Change talked about the possibility of “golden years” ahead, as the temperature warms up. —

Shell’s seismic survey will cause ‘irreparable harm’ to sea life, including migrating whales along the Wild Coast in December

When it opened its doors in 1960, the Ducor was one of a few five-star hotels in Africa, boasting a night club and air-conditioned rooms, according to travel guides
Business