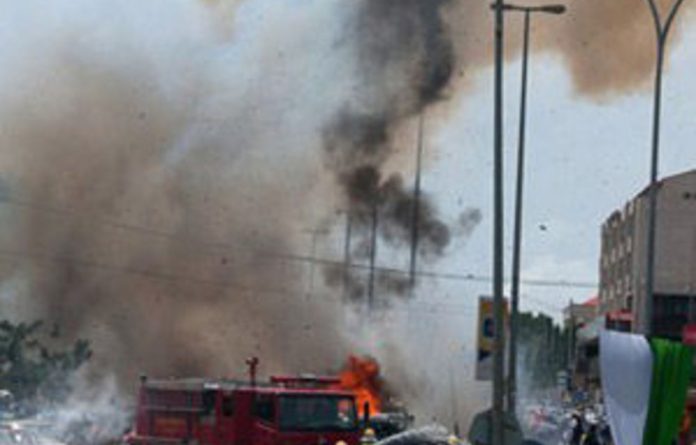 Nigerian authorities hunted oil militants on Saturday who claimed responsibility for two car bombs that killed at least 12 people near independence celebrations in the first such attack in the capital.

Friday’s car bombs close to where Nigerian leaders and foreign delegations had gathered escalated militant group Mend’s “oil war” and came despite a lull in attacks after thousands of rebels signed up to an amnesty programme last year.

Mend issued a warning an hour before the blasts went off and later blamed government officials for the deaths, saying they “acted irresponsibly by ignoring our forewarning”.

“We hinted to the government security forces and gave them an ample warning of five days in addition to the one hour given today,” it said.

The car bombs failed to halt the ceremony marking 50 years of independence at Abuja’s Eagle Square, where a military parade marched and music played as President Goodluck Jonathan looked on.

On Saturday, police guarded the location where the bombs went off near the justice ministry and a federal court building. A line of destroyed and burnt-out cars remained, with glass and other debris still littering the cordoned-off area.

“We have mounted a check throughout the city,” he said.

Journalists covering the ceremony at Eagle Square on Friday said they heard what sounded like a third, smaller explosion inside the venue, but police denied any bomb blast occurred there.

Mend — the Movement for the Emancipation of the Niger Delta — says it is fighting for a fairer distribution of oil revenue in Africa’s largest crude producer, but has also been seen as a loose collection of criminal gangs.

The Niger Delta region, the heart of the country’s oil industry, remains deeply impoverished despite Nigeria’s oil wealth, as does much of the country, and spills have caused serious damage to the environment.

“There is nothing worth celebrating after 50 years of failure,” Mend said in a statement. “For 50 years, the people of the Niger Delta have had their land and resources stolen from them.”

But while Mend has been staging attacks over the last several years, they have mostly targeted oil installations or carried out kidnappings in the Niger Delta.

It was the first time they had struck in the capital and in such dramatic fashion, with the entire country focused on independence celebrations.

Shocking attacks
The car bombs went off within minutes of each other and in the same area, and witnesses said the first blast drew people to the scene who became victims of the second. Security officers were among the dead.

“They were running, pulling [them] off. The first car went, then while people were shouting, trying to rescue the other people in the vehicles, the other one went off.”

The shocking attacks drew intense speculation on Sunday over what was behind them despite Mend’s claim of responsibility.

The militant group is believed to have splintered, particularly over the amnesty. Some observers questioned what role politics played ahead of elections early next year.

The attacks drew widespread condemnation, including from UN chief Ban Ki-moon, the United States and the European Union.

“And we reiterate that violence has no place in political discourse in Nigeria or anywhere else,” he said.

Jonathan, who called the attacks a “wicked act of desperation,” is running in the elections. He is from the Niger Delta and faces pressure to resolve the situation in the region. – AFP