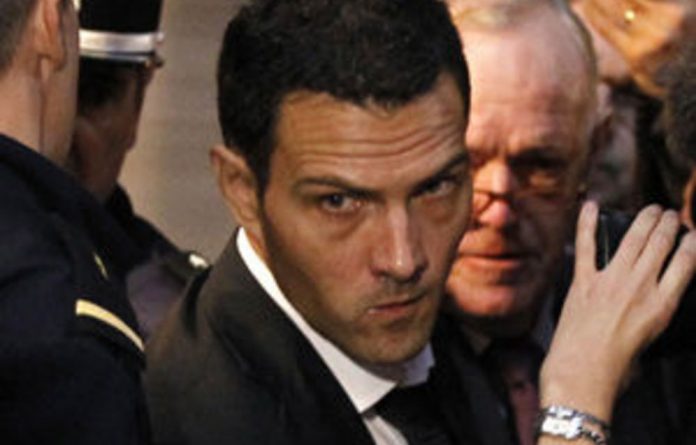 A Paris court on Tuesday sentenced rogue trader Jerome Kerviel to three years in jail and ordered the 33-year-old to pay back the five billion euros that his market gambles cost Société Générale bank.

The judge said the trader’s acts had “damaged the world economic order” and found him guilty of breach of trust, forgery and entering false data into computers.

Kerviel, who had argued that his bosses turned a blind eye to his trades as long as earnings were high, looked shaken as the sentence was announced.

Dressed in a dark suit and white shirt, he dodged hordes of journalists as he walked away from the courtroom to await further procedures that will decide when he is to be taken into custody.

His lawyer Olivier Metzner said he would appeal what he called a “totally unreasonable” sentence.

Metzner had called for Kerviel to be acquitted of all charges except the false computer logs, blaming the bank for the 2008 scandal that almost destroyed it and claiming that the trader’s bosses knew what he was up to.

Kerviel told the court he now earns €2 300 a month as an IT consultant, which means that with his salary it would take him more than 17 000 years to pay the €4,9-billion (currently $6,8-billion) awarded to the bank.

Société Générale lawyer Jean Veil called the sentence a “moral compensation” for the employees and shareholders of one of Europe’s biggest banks.

Presiding judge Dominique Pauthe told the court that defence evidence heard in his trial in June “does not allow us to deduce that Société Générale was aware of Jerome Kerviel’s fraudulent activities”.

He “exceeded his mandate by taking speculative positions without the knowledge of the bank, on a gigantic scale,” Pauthe added, saying Kerviel had acted calmly and cynically.

Bank lawyer Veil told reporters: “It has been very clearly shown that Jerome Kerviel’s behaviour, his lies, were so sophisticated that the bank could not suspect what he was doing.”

Kerviel had admitted regularly exceeding trading limits and logging false transactions to cover his gambles, but said this was common practice among traders and that bosses turned a blind eye as long as the money was rolling in.

On discovering the risky deals in January 2008, Société Générale was forced to carry out emergency transations worth €50-billion ($69-billion) — equal to nearly all its shareholder capital at the time — to balance its books.

The bank has admitted failings in its controls, for which it was fined four million euros in July 2008, but insisted at the trial that managers could not have tracked all Kerviel’s trades when he logged false data to cover them.

The trial heard from more than 30 witnesses but shed little light on what motivated Kerviel, who said that he tried to do his job in the interests of the bank.

“Why did he do these things? Hoping for a bonus? To become a star?” state prosecutor Philippe Bourion asked in June.

“That’s the only mystery the prosecution will not be able to solve.” – AFP