Girl from the Celtic Sea 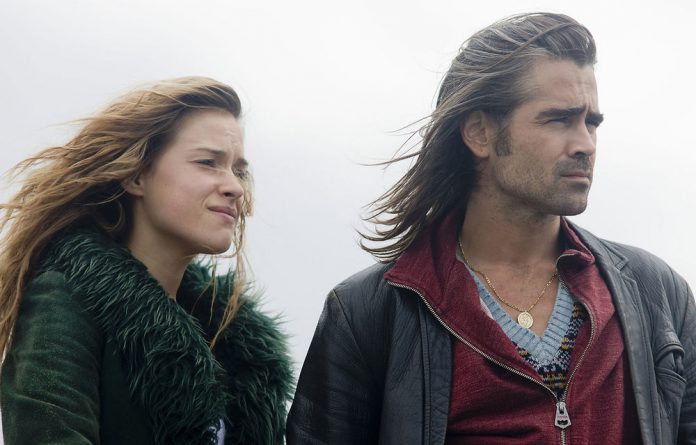 In legend, an ondine or undine is a water nymph or spirit. The term later became a proper noun and the name of this elemental creature.

She could rise from the sea to claim a human man and live a human life with him, subject to the usual terms and conditions, such as the Curse of Ondine: if her hubby betrayed her he would die when he fell asleep, that sort of thing.

Ondine is also the title of Neil Jordan’s new movie. Originally a novelist, Jordan gained attention in 1984 with his second feature film, The Company of Wolves. Based on the Angela Carter stories that reworked old folktales about wolves eating little girls and so on, it was a most striking film, as I recall.

Jordan has made several good movies since then (including The Crying Game and The End of the Affair), but it is The Company of Wolves that will spring to mind when you connect Jordan and mythic creatures.

Here, though, Jordan transposes legend to a pretty grimly realist kitchen-sink context. Colin Farrell plays an Irish fisherman, oddly named Syracuse, who one day fishes a woman out of the sea: she literally turns up in his net.

This beautiful and half-drowned creature (Alicja Bachleda) seems terrified of being seen by any other people, so Syracuse kindly finds her a hideaway — and a relationship develops between them. Of course.

At the same time, though, Syracuse has to deal with the rest of his life. He is a recovering alcoholic; his ex-wife is simply an alcoholic.

You would be too, probably, if you lived in this bleak little Irish fishing town, where the sky seems always to be hanging wetly just above one’s head, and it feels like it’s very very cold — or that may just be the effect of Christopher Doyle’s cinematography, which in terms of colour runs the gamut from grey-blue to midnight-blue, with a few brief pauses for some washed out greens.

Syracuse has responsibilities, and he takes them seriously. His daughter Annie (Alison Barry), who’s about eight or nine, I think, is mostly stuck in a wheelchair and in need of regular dialysis. Kidneys, you see.

She is also precocious: barely has the seawoman’s presence been discovered than little brainbox Annie is reading up on water spirits and the like, finding out all about ondines and selkies (seals that can change into human form) and quizzing the somewhat puzzled woman, who, claiming amnesia about her origins, accepts the name Ondine.

The scene is thus set for a mystery to unfold. We do want to know the truth about this mysterious woman, and we certainly want to know what her impact on Syracuse’s life, and that of his daughter, will be. (We don’t care about the alcoholic mom. Or, for that matter, the alcoholic mom’s Scottish lover.) Syracuse is also somewhat concerned about all this, and consults the local priest; he’s played by Stephen Rea, who must be Jordan’s favourite actor.

It’s clever of Jordan (who also wrote the script) to place this tale with its mythic resonances in a grittily real locale, as if to bring it down to Earth and relocate it in the lives of ordinary, troubled people.

It is certainly more compelling, that way, than it might be were he to have given it the full airy-fairy.

But is it compelling enough? The story is fairly gripping, but I found myself distracted by Farrell and his earnestly brow-furrowing attempts to play this part.

At one point, in a scene with him and Barry, mostly shot in close-up, Farrell’s eyebrows were doing such a tortuous dance of the hairy caterpillars that I almost developed full-blown larvaephobia on the spot.

And let’s not go into that silly, long flappy hair of his: such flowing locks on a man really only look good on supermodels, and then only in photographs, not in real life.

Farrell’s playing a poor fisherman here, for heaven’s sake! At any rate, his hair surely should not be competing for attention with that of his female co-star.

Farrell is much more appealing, to me at least, when he’s sending himself up, as he did in the brilliant In Bruges.

Farrell doing sincere dad et cetera began to weary me, though I am prepared to concede that there may be armies of woman viewers who want precisely this caring floppy-haired act from him, not to mention the vision of him having a sexy, romantic tryst or two with a mystery woman.

On that front, such viewers could feel a little shortchanged by the brevity of the sex scene.
How you feel about Farrell may determine your response to Ondine.

I didn’t quite buy him in this, or in fact his sharp-eyed little daughter, though she won me over in the end. I liked the film’s mix of realism and myth (or what you might call “mythiness”), but also found it dragged in places, weighed down perhaps by too much kitchen-sink sincerity, and I thought the ending contrived in some ways.