Together step by step 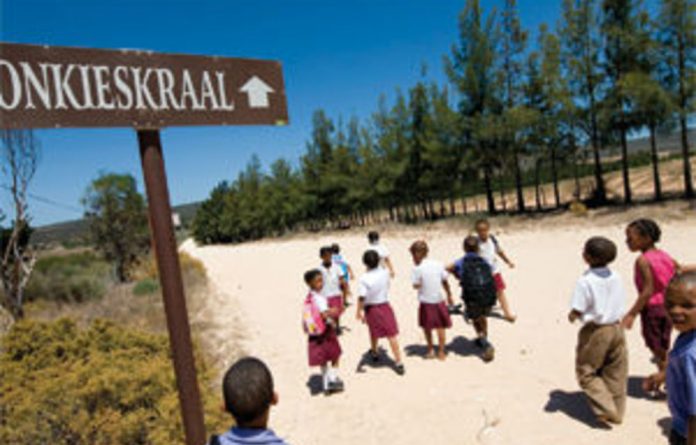 There is by now widespread agreement across the country on the fundamental problem in our schools — in far too many of them, learners do not learn what they should.

Our results in international testing programmes have been disappointing. Given the centrality of good schooling to the country’s development, it is not surprising that improving basic education appears as the number one outcome (of 12) to which the government as a whole is paying the closest attention.

Attempting to improve educational quality is not new in South Africa. It has been on the policy agenda since 1994. That our gains since then have been as meagre as they have been, despite increases in expenditure and ambitious interventions, is a sobering fact. Our gains in equity in public spending and in enrolling more learners have been significant and should be celebrated, but the battle has not been won until we see improvements in what learners learn.

Experience locally and outside the country confirms that one cannot just improve one element of the schooling system and expect learning to improve. If one trains teachers but learners do not have access to good materials you cannot expect success.

Similarly, if learner absenteeism is high, ensuring that every teacher is at school on time is unlikely to make a difference.

A key challenge is to get the plans for the sector to capture the interconnectedness of our interventions, while keeping the plans simple enough for the message to be clear and focused for the millions of South Africans, including teachers, parents and learners, on whom success depends.

A further challenge is to strike a balance between high aspirations and what is possible. To take just one example, we would all like to see South Africa achieve at the level a middle-income country should achieve in the 2011 international Trends in International Mathematics and Science Study (TIMSS) tests. However, evidence from even those countries with very well-designed interventions suggests that dedication mixed with a lot of patience is needed. It takes time for teacher practices and learner responsiveness to innovation to change.

Planning for the future
Our long-term strategy, called Schooling 2025, has accordingly set as an achievable target a level of performance in TIMSS by 2025. That is, almost as good as that in some developed countries and near the top of the list of developing countries.

There is no reason why this is not achievable. But it does mean that noticeable improvements in, for instance, literacy and mathematics are necessary every year, starting from now.

An improvement of 14% in the TIMSS grade eight mathematics mean between 2003 and 2011 is envisaged. Large achievements over time are nothing but the accumulation of many smaller achievements in each year. The new Annual National Assessments (ANA) programme will be a key mechanism to monitor that improvements occur every year.

The Action Plan to 2014, covering the current electoral cycle and part of the Schooling 2025 strategy, has been widely publicised. Extensive consultations with stakeholders led to the publication of a shorter version of the plan for public comment in Government Notice 752 this year.

Respondents have mostly been enthusiastic about the idea of a national plan for schooling. Already a large number of valuable inputs on gaps in the plan and on ways of tackling old problems differently have been received. The closing date for responses is October 29.

Work on a full version of the plan is at an advanced stage. This will include details on nearly 40 indicators, with national and provincial targets as well as milestone events in each year. Action Plan to 2014 forms the basis for the education minister’s delivery agreement, which the presidency has now finalised for all Cabinet ministers.

Triple T
So how will improvements in learning outcomes be achieved?

One easy way of thinking of what must be done is to use the “triple T” of the Quality Learning and Teaching Campaign, a stakeholder body set up in 2008. The three Ts are teachers, textbooks and time.

The action plan focuses on improving the availability of teacher-training programmes and the systems through which teachers are accountable to the school, the employer and the community. Following the 2009 Teacher Development Summit, new ways are being found of filling the existing gaps when it comes to good teacher-training materials.

Much of the envisaged expansion will occur through e-education, which will give district officials and teachers easier access to materials through the internet. Three mechanisms — namely ANA, a new network of nationally employed experts providing support for teacher appraisal in schools, and a new points system for in-service professional development — will go a long way towards strengthening teacher accountability and professionalism.

On textbooks, it is worth noting that Stats SA data from households indicate that the largest complaint in poorer communities about schools is insufficient access to books. This problem, recognised in the 2009 curriculum review, is being tackled by defining a “minimum schoolbag” for every grade. This will make it easier to monitor where the most serious learning-material shortfalls exist and to track improvements in the learner:textbook ratio.

With respect to time, it is clear that more time in the classroom dedicated to teaching and learning is needed. Ultimately, however, the aim must be to ensure that teachers complete the stipulated learning programme within the year. Evidence indicates that this does not occur often. A new system is being developed whereby not only districts but also the national department, by direct school visits, will gauge the extent to which programme completion occurs.

Bringing about the changes needed so that schools will fulfil the vision of generations of South Africans, who have struggled for a decent educational start in life for all, is not something the government can do on its own. It has a key role to play in planning, ensuring policies are logical and well communicated, and in financing schools, with a special focus on the schools serving the poorest.

However, civil society, trade unions, business and other stakeholders have a crucial role to play too. A key aim of Action Plan to 2014 is to make it easier for the full range of stakeholders to participate in this exciting process.