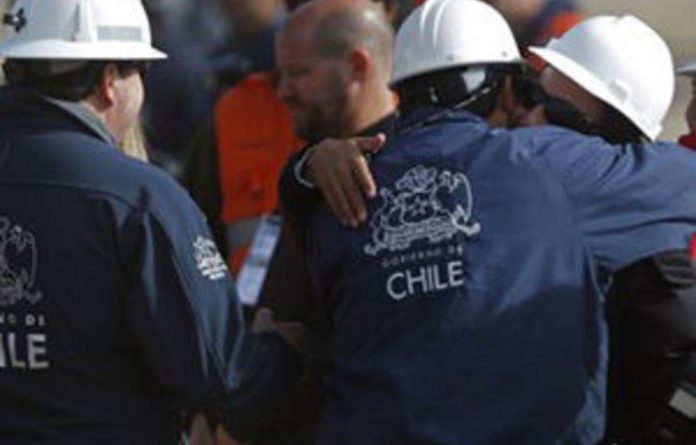 Chilean rescuers on Sunday reinforced an escape shaft to hoist 33 miners to freedom two months after they were trapped deep underground in a cave-in, as a stunning survival story that gripped the world nears its climax.

Engineers finished drilling a nearly 625 metre shaft just wider than a man’s shoulders to evacuate the men, and the miners used explosives to make room for a special capsule dubbed “Phoenix” that will hoist them one at a time to the surface.

The rescuers were inserting metal tubes to line the first 100m of the duct to strengthen it, and the government expects to start the evacuation on Wednesday in one of the most complex rescue attempts in mining history.

Spontaneous celebrations broke out across Chile on Saturday as news of the drilling breakthrough spread, with horns honking in the capital Santiago and flags waved in towns across a country still recovering from the ravages of a massive February 27 earthquake.

The mens’ relatives — who danced, sang, cheered and sobbed when the drill broke through 65 days after the August 5 collapse at the small gold and copper mine in Chile’s far northern Atacama desert — could barely wait.

“I have held back tears until now, but the joy is now too great,” said Cristina Nunez, whose husband Claudio Nunez is among the trapped. “I’m so happy he will be with us by my daughter’s birthday!”

Among the families is weeks-old infant Esperanza, or “Hope,” whose father is trapped miner Ariel Ticona. Ticona’s wife, Elizabeth, named the child after the makeshift camp erected at the mine.

Ticona saw the birth on a video sent down a narrow borehole that served as an umbilical cord to pass water and food to keep the men alive during the ordeal, and yearns to hold his daughter for the first time.

Once the men are winched to the surface, they will be given astronaut-style medical checks in a field hospital set up at the mine. They will then be able to spend some time with their families, before being flown by helicopter to nearby Copiapo to be stabilised at another hospital.

After spending so long below ground in a humid, dimly-lit tunnel, their eyesight will need time to adjust.

“They will come to the surface with their eyes closed and will immediately put on dark glasses which will protect them from the light,” Health Minister Jaime Manalich said. “They will keep them on night and day … until they get used to natural light.”

The miners are in remarkably good health, although some have developed skin infections. The government brought in a team of experts from Nasa to help keep the men mentally and physically fit during the protracted rescue operation. The men had lost an estimated 10kg each in the 17 days before they were found. – Reuters