Cheers and tears as first miners emerge in Chile 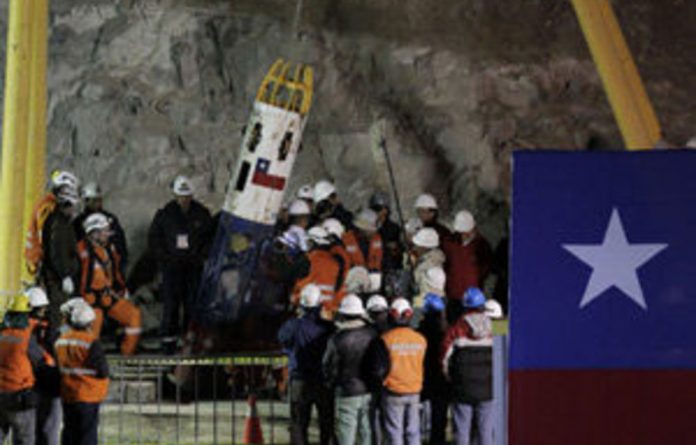 Calmly stepping out of the claustrophobic rescue cage, Florencio Avalos embraced his tearful seven-year-old son and let fresh air fill his lungs as he tasted freedom after 10 long weeks and Chile erupted in joy.

Whistles and screams of delight greeted the return to the surface of the missile-shaped Phoenix rescue capsule as a captive world audience applauded the arrival of Avalos and paid tribute to an unparalleled feat of survival.

After more than 68 days trapped deep underground in a damp, hot mine shaft plagued by doubt and fear, the reactions of the first miners as they were pulled from their subterranean hell were awe-inspiring.

Wearing dark glasses to shield his vulnerable eyes from the light, Avalos kissed his wife and comforted his son who was overwhelmed by the tension as the creaking winch hoisted his father up more than 600m.

After receiving a bear-hug from Chilean President Sebastián Piñera, Avalos embraced relatives of the other miners, some unable to hold back tears, amid a throng of hundreds of journalists and wellwishers.

The celebrations only got louder when the second miner, Mario Sepulveda, emerged and put on an exuberant show that completely defied the gravity of his nightmarish ordeal.

Delving into a bag, 40-year-old Sepulveda produced rocks and handed them as ironic gifts to officials and rescuers alike as he laughed and led the congregation in an impromptu chant of celebration.

Later he was more serious. “I have been with God and with the devil. I fought between the two. I seized the hand of God, it was the best hand. I always knew God would get us out of there,” he said. 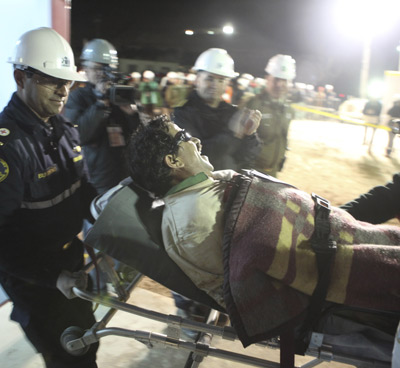 Chilean miner Juan Illanes is taken to a triage area of a field hospital after he was the third to be rescued at the San Jose mine. (Reuters)

Sadly, the elation of some of 31-year-old Avalos’s family members turned to horror when a media scrum trampled their humble tent in a mad rush to secure that all-important interview.

Reporters pushed and shoved to be the first to interview them, pulling on the hair of those in the way, throwing punches and almost knocking others to the ground.

The chaos and jostling marred the celebrations as the news workers rushed forward as one to capture the historic moment and surrounded the tent on all sides in walls of cameras and journalists.

The family retreated, and a frightened-looking Maria angrily hit out at journalists close to her with the Chilean flag bunched in her hand.

The mayhem stood out in an otherwise festive occasion in which families and reporters alike shared the euphoria of seeing the miners emerging one by one from the earth.

It was also revealing of the media pressure that has built up around the 33 miners, who have become national icons in Chile, and internationally famous.

Since their discovery on August 22, alive against all hope, their extraordinary struggle to survive has become an epic tale of human endurance followed closely by a captive audience around the globe.

The 32 Chileans and one Bolivian have become national heroes and imminent media stars, with books, movies and a barrage of press coverage likely from the moment they emerge from the mine.

In the ultimate sign of just how big a spectacle the miners’ rescue has become, television megastar Don Francisco — one of the biggest celebrities in all of Latin America — was broadcasting from the site. 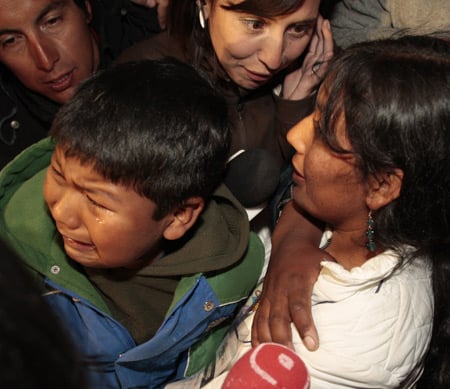 “I haven’t seen so much media attention since the Apollo XI back in 1969,” said the Chilean performer, referring to the Nasa mission that sent men to the moon for the first time.

In a party atmosphere, balloons drifted into the air and confetti showered on the heads of the crowds in pictures transmitted live to televisions sets and computer screens across the world.

Camp Hope, as the camp at the entrance to the fateful mine has been baptised, was home to a couple of hundred relatives of the miners when the accident first occurred trapping them August 5.

As the rescue neared, the number of relatives swelled to 800 — but was quickly dwarfed by about 2 000 media employees who arrived from around the world to cover the momentous event.

Winners, losers
The accident shone a spotlight on lax mining controls in the world’s top copper producer, but also highlighted a mature industry that has the machinery and expertise to handle one of the world’s most challenging rescues ever.

Here are the winners and losers in a saga that has attracted worldwide attention.