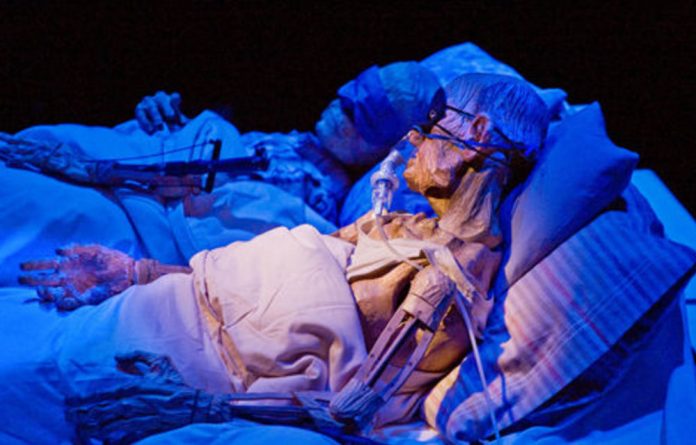 Or You Could Kiss Me, a new play by Neil Bartlett at the National Theatre in London, tells the story of a life-long relationship between Mr A and Mr B.

The action switches between the long, hot summer of 19 71, when they met on the beach in Cape Town, to the week when one of them is dying in 20 36, on the shabby side of Port Elizabeth.

The work, featuring puppets by Adrian Kohler and Basil Jones’s Handspring Puppet Company, is based on their own lives together and on an imagined future.

Except, the audience is told, “this is going to happen” and “all the events of this play are true”.

Putting your life on the stage is a special sort of challenge.

“It’s very exposing because it’s not you and it is you,” says Jones. There is a certain amount of “slippage”, a blurring of the lines between biography and fiction. And “part of the audience are believing the lie that you are telling”.

“That guy’s not you,” replies ­Kohler. “But he could become me,” insists Jones. “Sometimes I was in tears, or very near to tears during the making of it. The material is very close.”

“From my point of view, Neil has taken real-life incidents and woven them into a sequence that tries to put on record something that is very seldom talked about, and that is a long-term relationship,” says Kohler.

If this wasn’t daunting enough, the play is performed in the round, so the action can be seen from all angles.

Jones compares this to cross-hatching a mango with a knife and turning it inside out: “It appears to be like a little hedgehog. That is a little bit how it feels for the puppeteers working in the round. We feel turned inside out, very much revealed to the audience.”

The play also deals with being gay in apartheid South Africa. “The way that society relates to people being gay transforms all the time,” says Jones. “And just when you think it’s not an issue anymore someone gets murdered for being a lesbian in South Africa. This happens.”

“But I think this isn’t really a gay play,” says Kohler. He admits, however, that it deals with the fear of exposure — being discovered on the squash court, or wearing the same tie to a party. “It quite often takes huge courage to be out in a situation, when it is much easier to stay hidden.”

Jones and Kohler, both of whom perform in this show, are following on at the National from their success with Michael Morpurgo’s award-winning War Horse. “This is the next small thing,” says Jones, as they downsize, moving from the West End to the more intimate Cottesloe Theatre.

Kohler, who has worked with wood since he was a small child, has produced another surreal array of new carved wooden puppets.

The cast includes puppets of both young and old Mr A and Mr B, five-sixths life-size. Kohler showcases not just his skills as a puppeteer but also his importance as a sculptor.

The puppets are intricately carved out of wood, which is then hollowed out. In some places they are 4mm thick, and thinner, to make them lighter. But their weight is not insignificant and becomes more noticeable after just a little while.

This also makes them very fragile. Kohler points out the shiny glue on one puppet’s fingers. “Breakage is not a tragedy, it’s just an inconvenience,” says Jones.
“If it happens, you’re not fazed by it, you perform through the breakage,” says Kohler.

“The issue of breath came quite gradually,” says Jones.

Initially they had not been so interested in breathing as a device to give life to the puppet, but over the years they became more focused on the micro-movement of puppets, as opposed to macro-movement, which is more about choreography.

They realised that not only was micro-movement central to their work, but that “breath is the beginning of that level of movement”, says Jones. He describes sitting at the back of the theatre during War Horse, where “you could definitely see whether a puppet was breathing or not”.

“If the puppet doesn’t breathe on the stage, then the audience holds its breath for the puppet — unconsciously, and then after a while, it gives up the illusion of life,” explains Kohler.

The difficult task of writing this play for puppets fell to Bartlett. The real challenge lay not in the dialogue; rather, it was how to “embody” qualities like “memory, frailty, tenderness and courage”, says Bartlett.

“Basically, silence — not speaking — was always going to be the main event,” Bartlett says. “This is because puppets may be able to do some things on stage more conveniently than actors ever could — but they can never, ever express themselves by speaking dialogue.”

The British actress, Adjoa Andoh, puts in a strong central performance as a tough no-nonsense housekeeper, doctor and nurse. She pulls all the puppeteers together and comes across as a South African, in a part that was written specially for her.

Like all good theatre, Bartlett and his puppeteers weave a dream that draws you in and leaves you wanting to find out what happens next.

Or You Could Kiss Me is a spellbinding tale of everyday life. It is about being 19, falling in love and of how even the greatest love can’t last forever.