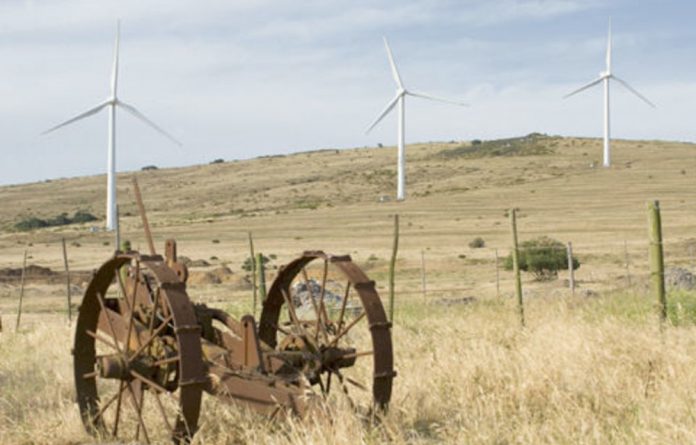 A massive green rush is under way in South Africa, with major energy, construction and finance companies setting up specialised renewable energy units in anticipation of the government finalising the rules of engagement at the end of the year.

The government has set a target of 4%, or 1 025MW, of renewable energy installed from private sector suppliers by 20 13, up from less than 0,1% at present.

Although the renewable target is dwarfed by government’s planned 48 000MW Medupi coal-fired power station, it represents the first stage in the country’s long-term drive to increase its energy production while reducing its carbon emissions.

“A lot of companies are positioning themselves, but don’t want to overplay their hand,” said Richard Worthington, the climate change programme manager at the World Wide Fund for Nature South Africa (WWF SA).

For example, Sasol, the liquid fuels and chemical producing giant, has set up a new energy unit, allocating R200-million to solar energy projects, such as a co-investment in a solar module thin-film plant in Paarl and the development of solar tower technology.

The Aveng construction group has allocated R20-million this year to facilitate future wind and solar power projects and plans to set aside more money in the future.

Similarly, Exxaro, the diversified mining company, announced last month that it would set up a dedicated renewable energy division in the next six months. It, too, is eyeing solar and wind to diversify its coal-fired and waste gas co-generation projects.

Banks are eager to get in on the act by financing renewable energy projects, nearly three-quarters of which will be debt-funded, says an industry insider at the Industrial Development Corporation (IDC).

The IDC has set aside R11,5-billion for the green economy in the next five years and most banks have also identified this sector as a major future growth area.

Wind
The South African Wind Energy Association (Sawea) said it has conducted research to identify all projects its members have undertaken.

“Some 5 000MW-worth of projects from the Northern Cape, Western Cape and Eastern Cape have started with wind measurement and environmental impact studies and should be ready for construction between now and, say, mid-20 12,” said Nicolas Rolland, a Sawea board member.

“Taking into account that construction would take anything between four months and two years depending on the size of the respective projects, this means that before 20 15 the industry will be in a position to commission 5 000MW of wind power generation,” he said.

“On the conservative assumption that these projects will have on average a capacity factor of approximately 30%,” Rolland estimated that “by the end of 20 15 the wind energy industry could produce 13 140GWh of energy annually”.

Based on Rolland’s figures, wind energy could supply about 5% of anticipated national energy consumption by 20 15, or roughly a quarter of residential (domestic) power consumption — enough to light up at least a million high-income households, or more than five times as many low-income households.

Individual wind energy developers were keeping their projects close to their chests for now, said Worthington, because they wanted to secure land at favourable rates first before advertising their intentions.

But some companies had been “very bullish” about wind energy, Worthington said, including Mainstream Renewable Power, whose local subsidiary is developing a 30MW wind farm in Jeffreys Bay, which could be increased to 160MW in further phases.

Vestas, a Dutch wind turbine manufacturer, set up a sales office in Johannesburg in June and hopes to increase its profile in the country as demand for wind turbines grow.

Worthington hoped that the wind turbine manufacturing industry would localise its component production, but this depended on how many wind farms were going to be built.

Solar
South Africa has one of the highest levels of solar radiation in the world. The solar energy sector, while currently lagging behind wind in terms of the maturity of its technology and its immediate capacity, could eventually become South Africa’s biggest generator of renewable energy.

According to Ryan Hammond, Solairedirect Southern Africa managing director, between 500MW and 800MW of solar technology projects are under development, although this includes projects at the very early feasibility stage.

Eskom is leading the way in developing solar power and plans to invest part of its R3,75-billion World Bank renewable energy loan in a 100MW concentrated solar pilot project in Upington. Construction is scheduled to begin in mid to late 20 12.

Upington could become the epicentre of South African solar energy. According to a report published in the Engineering News last month, Upington has a potential renewable energy generating capacity of 5 000MW.

The Clinton Climate Initiative (CCI) has conducted a joint feasibility study, with the department of energy, into a proposed 1 000MW solar park in Upington. The project could cost about R50-billion more than the R125-billion Medupi coal-fired power station. A conference to gauge investor appetite for such a project will be held later this month.

Mainly foreign manufacturers of solar technology are considering setting up manufacturing facilities locally in anticipation of a solar boom. Technology vendor eSolar would do so if it could get at least 500MW of business, said Stuart Fredman, the company’s South African managing director.

Meanwhile, the South African National Energy Research Institute (Saneri) is lobbying for the creation of a solar hub in South Africa that would set up local manufacturing capacity and boost skills and research.

Kadri Nassiep, the Saneri chief executive, said that the hub should be in Gauteng, or another metro area, where infrastructure, manufacturing capacity and postgraduate research institutions already exist.

Biogas
Biogas is gas produced by wet organic waste decomposing under anaerobic conditions. South Africa’s landfill sites have been identified as potential biogas producers, but Nassiep believes that biogas is a “limited resource with a very short window period” for exploitation in South Africa.

“There are a finite number of landfill sites in the country and we won’t continue to landfill for ever. So once we’ve tapped into these sites, that’s it,” Nassiep said.

Hydro
There are limited opportunities for large-scale hydro-generated power projects in South Africa, but some sites on the Orange and Jukskei rivers could be developed further.
At present, the bulk of the country’s hydro power is produced at the mini and micro levels (below 5MW) by small developers.