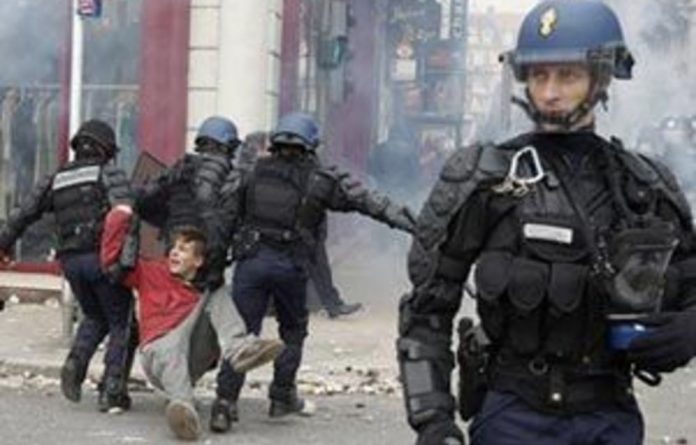 Police cleared protestors blockading French fuel depots on Wednesday as the government warned of economic damage from prolonged strikes against its plan to raise the retirement age from 60 to 62.

A third of France’s filling stations ran dry on Tuesday, the government said, while cars were set alight and police fired tear gas at rioters on the sidelines of protests that brought a million people on to the streets.

“If it is not stopped quickly, this disorder which is aimed at paralysing the country could have consequences for jobs by damaging the normal running of economic activity,” President Nicolas Sarkozy said in a statement on Wednesday.

Workers in several key sectors have been on strike for a week to protest the pensions reform, which the government says is essential to reduce France’s public deficit. Unions and political opponents say it penalises workers.

‘We will not let the country be blockaded’
Sarkozy said he had ordered police to break the blockades at all fuel depots blocked by protests, refusing to back down on the reform that is scheduled to be voted on definitively by the Senate on Thursday.

“We will continue to unblock these depots as much as necessary,” Hortefeux said. “We will not let the country be blockaded and we will not let the thugs go unpunished,” he added, referring to those arrested in street riots.

Ongoing disruption was forecast on the national railways, with a third of TGV express trains cancelled, operator SNCF said.

A quarter of flights were cancelled at Paris’s second biggest airport, Orly.

Sarkozy’s reform would raise the standard retirement age from 60 to 62 and the full benefits threshold from 65 to 67.

Unions have proposed alternative ways to cut the deficit but say the government has refused to negotiate with them. They are to meet on Thursday to decide their next action.

Business associations were anxious about the impact of drawn-out strikes.

“After three years of economic crisis, we do not have the means today to endure long strikes,” the head of the CGPME small and medium business association, Jean-Francois Roubaud, said on Europe 1 radio on Tuesday.

Clashes
Television news was dominated on Tuesday by scenes of clashes between riot police and youths in Lyon and suburbs of Paris, which Hortefeux blamed on a rogue minority of “thugs” who joined ongoing protests by high school pupils.

The minister, who heads a crisis cell to deal with the disruption, said police had arrested 1 423 “rioters” over the past week.

Hundreds of schools remained blockaded in the strike, the government and a schools union said, while youths torched another car in Lyon city centre, where riot police were deployed.

CNIR traffic info service counted a dozen roadblocks or go-slows on Wednesday morning after truckers joined in the strike action this week. Rubbish piled up in the streets of Marseille due to a strike by collectors.

A poll by BVA published on Wednesday said 59% of the French supported a continuation of the strike even if the Senate passes the reform this week. — AFP