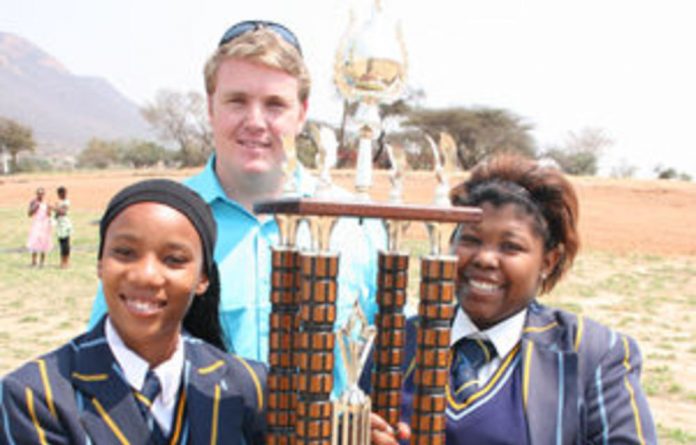 Two grade 11 tourism studies learners from North West province have won a trip to an international tourism conference in Germany where they will present their green tourism research project.

The learners, Candice Smit and Jessica Ngalo from Klerksdorp High participated in the South African leg of the Global Travel & Tourism Partnership (GTTP) competition. This is an annual tourism studies competition for learners in grades 10 to 12. They will travel to Munich, Germany with their tourism studies teacher Rudi Meyer in late November where they will meet their counterparts from 11 other participating countries.

The GTTP is funded by global partners and the private sector. It holds workshops to improve the teaching of tourism studies and its annual learners’ competition connects South African schools with other countries.

According to Lisa Gordon-Davis, GTTP country director for South Africa, this international research competition ensured that learner’s “got excited about tourism”. The local leg of the competition entails finding a winning entry via provincial and national rounds. She said the Klerksdorp entry “was beautiful … They made their own magazine that focused on green tourism and waste management. They had to explain whether it’s viable,” she said.

Ngalo explained that the project was about “protecting the environment”. They researched eco-friendly tourism at a national game park in the North West province to showcase their understanding of green tourism.

The spin-off for Smit is that this project has helped her become interested in tourism as a career after school. “A lot of people don’t know what we have in South Africa. I want them to know about our country. I can do this with tourism,” she said.

For Meyer, who has taught tourism studies for the last three years, “it’s a growing subject” as more learners are choosing to study it.

“Children are learning at school that there are many places in South Africa that we don’t know about or explore. It is also helping them with career options. There are so many jobs in tourism,” said Meyer.

“They have also looked at what green heritage they want to leave for the next generation. We also have green activities at the school and clean up townships in Klerksdorp.”

Tourism studies is a relatively new subject and according to Gordon-Davis, there are 300 000 learners at 2 500 high schools countrywide taking this subject.

Bulelwa Seti, deputy director-general of the national tourism department said this event aims to “empower educators and stimulate discussions between stakeholders for the benefit of the industry”. It will be the third year that this expo is being held.

The tourism department estimates that 15 000 learners and 200 teachers will pass through the expo doors in 2011. Forty exhibitors, seminars and workshops are included.

“Learners will access critical information about tourism, its importance to the South African economy and the professional career prospects that exist in this sector including accessing learnerships, internships and bursary opportunities,” said Seti.

The expo will host a competition with bursaries and cash prizes of up to R10 000. It will be open to schools, students at tertiary institutions, unemployed graduates, the general public and further education and training colleges. More information is available at www.tourismcareers.co.za