Boo! not such a drag 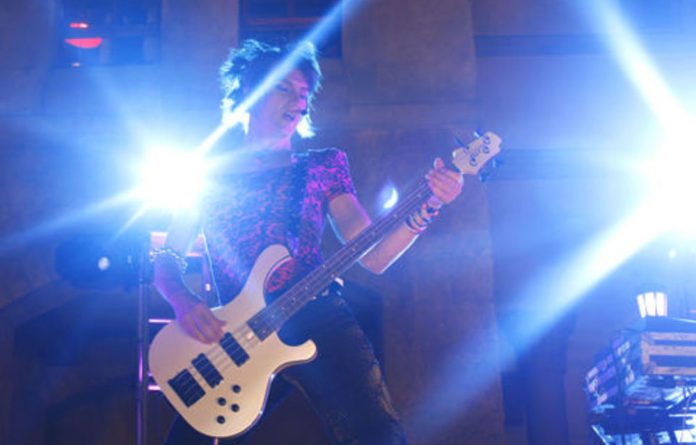 The large hot air balloon remains tethered to the ground outside Montecasino in Johannesburg.

Tonight the wind is too strong for the balloon to go up — least of all with a bunch of journalists and local band Boo! inside.

The flight was intended to symbolise the launch of the Boo!’s latest album, The Three of Us, after the outfit’s six-year hiatus.

Hopefully the failure to get up in the air is not a bad omen.

Boo! have been performing since 19 97 and within seven years earned themselves a cult following. But, of late, some fans are not happy to see Boo! receiving so much publicity and are critical of their new direction.

Chris Chameleon, lead singer and bassist, describes it as a typical reaction: “Older fans want [their favourite band] to succeed but they also want to keep them to themselves. We have never made music to please any particular type of music taste or audience.”

The trademark “monkipunk” sound of Boo! is what sets them apart from other bands that have come and gone over the years. Their music is frivolous and upbeat. The songs are quirky and Chameleon’s vocals are, at times, exceptionally strange but intriguing.

Riaan van Rensburg, the percussionist and latest addition to the band, says the new album’s title has several meanings.

“The Three of Us doesn’t necessarily mean the three of us,” he says gesturing to his band mates. “If your loved one goes away, you are left to deal with yourself — me, myself and I.”

But, Chameleon says, like most creative processes you can’t actually trace where the idea came from. “By the time you release an album, you have listened to it more than 500 times. You lose all objectivity. We ask friends, colleagues, strangers.”

Known to be an independent band, Boo! signed with local label Sheer Sound on October 14. “Boo! was, until yesterday, the world’s greatest unsigned band,” says Chameleon, who believes they are now experiencing their “honeymoon period” with the label. “We really had to mull it over,” he says. They were not “hunting” but rather found a place that is safe and comfortable and inspiring.

The band believe that every album they release is new and different and this one certainly ventures into new territory. Boo! multi-instrumentalist Ampie Omo says a major difference is “the album quality”. “It is a very well-recorded album compared with others.”

The album was produced in Amsterdam but the band felt it sounded a little tame and had it remixed back home for an added kick — what Ampie calls “the dirty edge of Boo!”.

A significant change for the band, Chameleon says, is that they will refrain from their trademark drag-queen style for now. He offers two reasons: “When I was younger, I didn’t care about people’s feelings. But I find I care now. And when I was younger I was a hot chick and I wonder if I am not becoming a tannie now. There is something to be said about ageing gracefully.”

Tonight the band looks polished in black suits. But once on stage, Chameleon has certainly transformed. He wears a tight, shocking-pink patterned top, a raspberry necklace, pink body glitter and his hair is feathered with accessories. As he sings in falsetto he raises and swings his arms in a ridiculously camp manner.

The crowd is tame yet one can pick out avid Boo! fans. They sing along to every lyric. When old favourites, such as Lucki and OOAA, begin they scream excitedly and bounce along to the monkipunk beat.

Chameleon’s coquettish demeanour seems to have attracted curious spectators. Some are probably fans of his more mainstream solo career. They look markedly confused and are transfixed by the slender figure camply swinging his hips on stage.

Songs from the new album have yet to grow on people, but with sure-fire hits like The Three of Us and To Do Today, Boo! can anticipate further success — even if that balloon never launched.