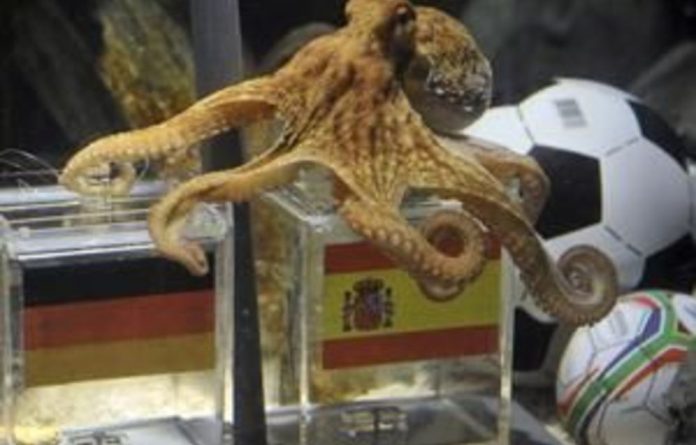 Paul the octopus, who shot to fame during this year’s Soccer World Cup for his flawless record in predicting game outcomes, has died, his aquarium in Germany said on Tuesday.

“Management and staff at the Oberhausen Sea Life Centre were devastated to discover that oracle octopus Paul, who achieved global renown during the recent World Cup, had passed away overnight,” the aquarium said in a sombre statement.

“Paul amazed the world by correctly predicting the winners of all Germany’s World Cup clashes, and then of the final,” said Sea Life manager Stefan Porwoll.

“His success made him almost a bigger story than the World Cup itself … We had all naturally grown very fond of him and he will be sorely missed,” said Porwoll.

Paul beat the odds during the World Cup by correctly forecasting all eight games he was asked to predict, including Spain’s 1-0 win over The Netherlands in the final.

For the prediction, two boxes were lowered into the salty soothsayer’s tank, each containing a mussel and the flags of the two opposing teams.

Watched by myriad reporters, Paul would head to one box, wrench open the lid and gobble the tasty morsel, with the box he plumped for being deemed the likely winner.

His astonishing ability made him a global media phenomenon. His later predictions were carried live on rolling news channels in Germany.

But the art of football predicting became a dangerous job for the England-born clairvoyant.

He was slammed in the British press for treason after tipping Germany to beat his “home country”, which they duly did, 4-1.

He then fell offside with bitter German fans who threatened to turn him into sushi after he correctly predicted a semifinal defeat for the Mannschaft against Spain.

‘Treachery’
Stung by Paul’s “treachery” at picking Spain over Germany in a semifinal, some sections of the 350 000-strong crowd watching the game on giant screens in Berlin sang anti-octopus songs.

The honour of Paul’s mother was also called into question in the stands, and Paul’s home aquarium received death-threat emails saying “we want Paul for the pan”.

And Spanish Industry Minister Miguel Sebastian called for the creature to be given an “immediate” free transfer to Spain to “ensure his protection”.

Paul’s fans need not despair too much at his death. The aquarium has already been grooming a successor, to be named Paul like his mentor.

Paul’s body is now in cold storage while the aquarium decides “how best to mark his passing”.

“We may decide to give Paul his own small burial plot within our grounds and erect a modest permanent shrine,” said Porwoll.

“While this may seem a curious thing to do for a sea creature, Paul achieved such popularity during his short life that it may be deemed the most appropriate course of action.” — Sapa-AFP