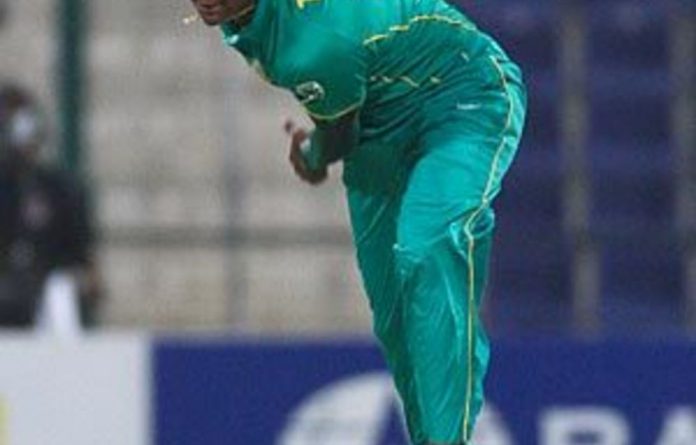 Rusty Theron took a career-best 4-27 to help a clinical South Africa upstage Pakistan by six wickets in the second Twenty20 international on Wednesday to take the two-match series 2-0.

The 26-year-old Theron bowled with purpose as South Africa restricted the former World Twenty20 champions to a low score, of 120-9, on a flat wicket at the Abu Dhabi Cricket Stadium for a second day in succession.

South Africa won the first match by the same margin on Tuesday.

Graeme Smith (38) and Colin Ingram (31) led the South African reply with JP Duminy (20 not out) hitting the winning runs to complete the team’s chase with eight balls to spare.

Smith and De Villiers fell in quick succession, but Duminy and Ingram added 41 for the fourth wicket, batting with guts and application as the Pakistani spinners failed to extract any life out of the track.

Ingram hit four boundaries and a six during his robust 17-ball innings.

Captain Johan Botha was pleased over his bowlers’ performance.

“We didn’t get teams out in Twenty20 previously and to get Pakistan out twice on two days was nice,” said Botha. “Theron bowled superbly and all the guys deserved this win.”

Some respectability
Earlier, Theron built on some early knocks by fellow fast bowler Lonwabo Tsotsobe (2-20) to stop Pakistan from posting a fighting total.

“We needed good starts but that didn’t come in both the matches,” said Afridi. “My own performance was not up to the mark so we have to sit down and plan to improve our batting, which is struggling.”

Only Misbah-ul-Haq, who top scored with 27 in the first match, survived the effective South African bowling, with a resolute 38-ball 33, hitting two boundaries and a six.

It was Misbah-ul-Haq who gave Pakistan’s total some respectability through a 45-run sixth-wicket stand with Abdul Razzaq (25) after Pakistan lost half of their side for a paltry 39 inside eight overs.

Tsotsobe, who took 3-16 to restrict Pakistan to 119 on Tuesday, once again removed both the openers, Shahzaib Hasan (six) and Imran Farhat (nine), to give South Africa an ideal start after their opponents won the toss and elected to bat.

Theron then took charge as he removed Pakistan skipper Shahid Afridi (three) before dismissing Misbah-ul-Haq and Umar Gul off successive deliveries. He finished his spell by bowling Zulqarnain Haider (17) off the last ball of the innings.