A landscape of leftovers 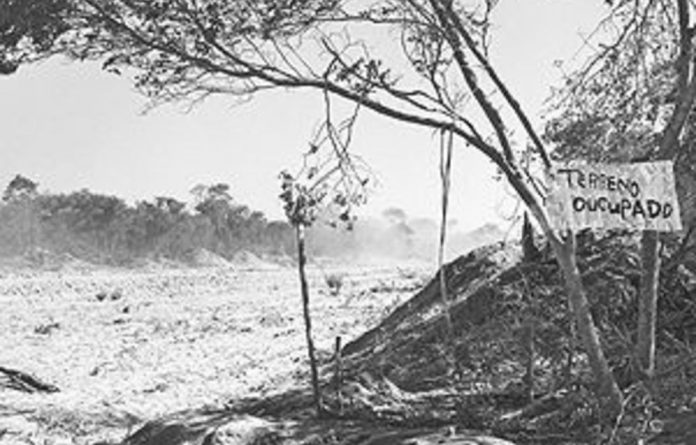 The border regions of southern Angola are the terrain of Jo Ractliffe’s compelling yet difficult new exhibition of photographs and an accompanying book titled: As Terras do Fim do Mundo.

The title was a Portuguese colonial name for Angola’s interior meaning “the lands of the end of the world”. Tracing the lines of South Africa’s incursions into Angola during the 1970s and 1980s, these silver gelatin prints probe a region the artist describes as “a landscape of left-overs, an open-air depot for the vestigial stock of war”.

Ractliffe travelled through this area over 2009 and 2010 in the company of former South African and Angolan soldiers revisiting the battlefields.

Historical violence is filtered through the aesthetic of landscape photography.

The monograph includes a fragmentary narrative of the journey.

From the garbage heaps, markets and shipwrecks of Luanda, the artist journeys into a bleaker territory of mined forests, former battlefields, abandoned cornfields, desert bases and mountain graves.

Her artistic vision presses against the harsh materiality of the landscape. The images retain an emotional distance from their subject.

These pieces — repetitive in the bleached tonalities of foliage and desert — require close examination.

Ractliffe’s eye for the strange within the mundane is dimmed here, yet present in the detail. A scarecrow is barely visible amid a Mopane forest.

Two mysterious assemblages are raised on desert mounds, made of a Chinese military helmet, a cooking pot, a funnel and a few wine bottles.

What the memorials mean or who made them is unclear.

Their silences are mouthed through empty bunkers and old trenches used by Cuban and Angolan soldiers. As Ractliffe records: “Sometimes, I’m not even sure what it is I’m looking at. I am here without language. It is hard to read the signs.”

Ractliffe documents the journey on a barren road to Cuito Cuanavale, the site of the infamous 1987 battle between Unita and the South African Defence Force on the one side and Angolan government forces and Cubans on the other.

The defence of Cuito Cuanavale led to the withdrawal of South African forces from Angola.

The images give a visual presence to a space that, for many South Africans, is veiled in political mythology or repressed memories.

Faded testaments to the war permeate these works, including murals and Communist stars.

The “Monument at Ebo” — a site commemorating the defeat of South African forces in battle — shows a ruined Eland armoured vehicle and Cessna airplane. Beneath these are buried four South African soldiers.

Around them are stark concrete pillars. The memorial seems half-built; its tangible sense of incompleteness makes it one of the few iconic images in the collection.

Ractliffe’s intent here is neither social documentary nor political analysis. She does not comment in the book on the politics of post-war Angola or the struggles of returning communities re-establishing their disrupted livelihoods.

She does not delve deeply into the experiences of war, noting only a few exchanges with the soldiers. The spare, poetic language of the text, like the images, leaves much unsaid.

But this distancing is troubling in its removal from the present experiences of this region. One is left wondering how these areas are lived and inhabited.

The only people in the images are a line of walkers on a road at Cuito Cuanavale, distant soldiers training in barren desert and the peculiar image of a mine clearer.

In this sense the artist, perhaps unwittingly, repeats the old colonial imagining of the title, of a land at the end of the world, outside of history. As she writes: “I feel as if I am in a place that has abandoned itself, is indifferent to the collapsing of time and history.”

Yet, in documenting the memorials and inscriptions of war, these images are a reminder of how the violence of these “border wars” has stained the region. In May 1978 the SADF attacked Cassinga, claiming it was a base for Swapo military operations.

The claim is intensely contested and the area was also clearly populated by civilians and Namibian refugees.

Hundreds, including women and children, were killed and buried in a mass grave. Ractliffe’s treatment of the site is poignant — the concrete slab covering the grave is littered with leaves and tufts of grass grow from the cracks.

The image and text elicit contemplation: Who tends to this memory and who will sweep away the leaves and reletter the concrete?

It is in this questioning that the power of these images resides; they trace the contours between memorialisation and effacement, alluding to figures, present and past, beyond the frame.

Like the lines of stone, disappearing into white dust tracing a desert road to a hidden Cuban missile base, history appears and fades in the same movement.
The images open a frontier requiring interrogation, not occupation.

A history of violence and elusive hope